The Esoteric In Grand Central Terminal

I'm back from vacation, and for This Hidden City's 3rd Anniversary post, I thought I'd cover some of the lesser known (and seen) aspects of a place most locals and tourist have entered: Grand Central Terminal. I'll also try to dispel some myths along the way.
For the few unaware, Grand Central Terminal is the railroad terminal at 42nd Street and Park Avenue in Midtown Manhattan. Though another building, also called Grand Central Station, had been in use since 1871, it was torn down. The Main Concourse Building there now was built from 1903 to 1913 by, both, the architecture firm of Warren & Wetmore and Reed and Stem WASA Studio. It is different from what is now known as Grand Central Station, as that is a subway stop, and Grand Central Terminal is where all Metro-North Railroad train lines end (soon the East Side Access project will connect the Long Island Rail Road there as well).
While all other Metro-North stations are owned and managed by Metropolitan Transportation Authority (MTA), Grand Central Terminal is owned by Midtown TDR Ventures.
We'll start outside, and work our way around inside, until we reach its very depths and heights. As you enter on 42nd Street, one can look up 48 ft (15 m) to see the statue of Minerva, Hercules and Mercury, titled "Glory of Commerce", which was designed by the French sculptor Jules-Felix Coutan, and carved by the John Donnelly Company. Within the statue is the world's largest Tiffany clock, stretching 13 ft (4 m) across. 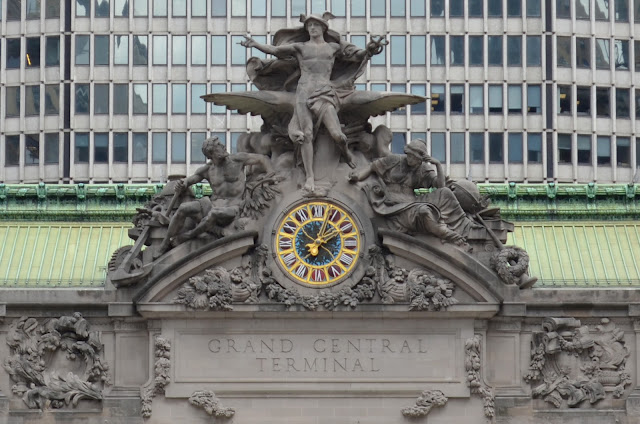 The clock was installed in 1914, but was heavily damaged throughout the years. In 1992, Rohlf’s Studio in Mt. Vernon began repairs. Since access to the clock was only available via one set of small stairs, it had to be disassembled piece by piece, and the repairs were not finished until 2004.
Walking to the center of Grand Central Terminal, we find another amazing clock atop the information booth. Created in 1913, by Seth Thomas Clock Company of Connecticut, the clock is worth $10,000,000, due to the huge convex opal faces on all four sides. The top of the clock holds a compass, pointing to true north with 100% accuracy. 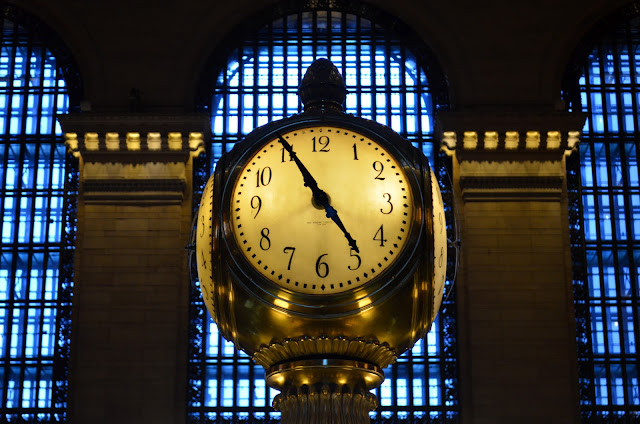 Still looking up, we now notice the ceiling of the Main Concourse. The astronomical design was the idea of Warren Vanderbilt, and it was completed by Hewlett-Basing Studio, with consultation by Warren's friend, portrait artist Paul César Helleu. Sadly, they screwed it up, and drew out the constellations backward (reversed left-to-right). Instead of admitting their mistake, the Vanderbilts claimed it was meant to be seen from the viewpoint of the Heavenly Father. Though that still makes no sense, if it were so, why would most of the star sequences be correct, but the constellation order out of place? 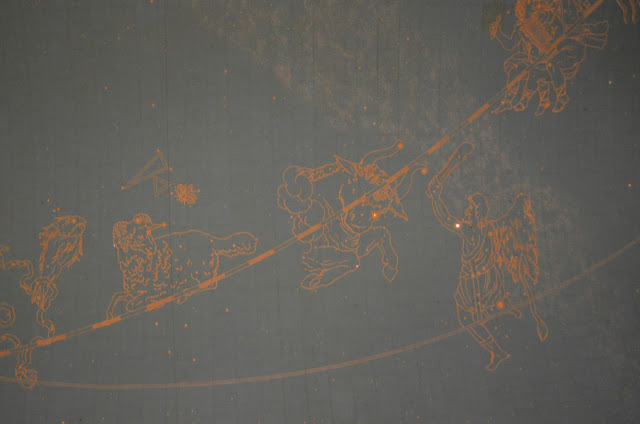 Now, if you look near Pisces, you may notice a small hole in the sky. 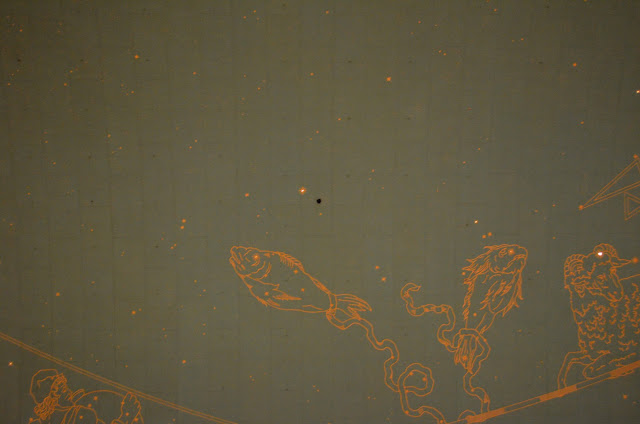 Myth has it that, in a 1957 bid to redress anxiety due to the successful launch of the Soviet's Sputnik satellite, a U.S. Mercury Redstone missile was displayed in the hall, but at 6 inches (15 cm) too long, they dug out a hole so the rocket could fit. While most of the facts are true, the reason for the hole is not. It is actually what remains from where they installed an anchor holding a stabilizing wire to the rocket's tip. Feel free to do the math: ceiling height = 125 ft (38 m), rocket length = 70 ft (21 m).
On the other side of the ceiling, near the crab constellation known as Cancer, is a very fitting reminder about the hazards of smoking.
By the 1980s, the ceiling was pitch black, and thought to be caused by diesel and coal engine smoke from the idling trains. In 1984, they performed Spectroscopic studies, and found it was actually nicotine and tar from cigarettes. It took 12 years to clean up the mess, but they left one brick as black as they found it, as a reminder of what many of us are doing to our lungs. 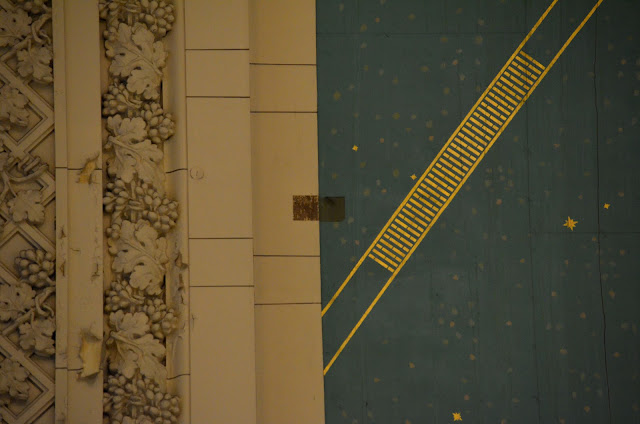 Now, look back to the photo of the Information Booth Clock, and one can see the windows in the background. As you may have noticed, there are walkways within those windows. Known as the "glass catwalks" - as they are made from sheets of glass block, fitted between metal girding - the walkways connect offices on either side of the building. 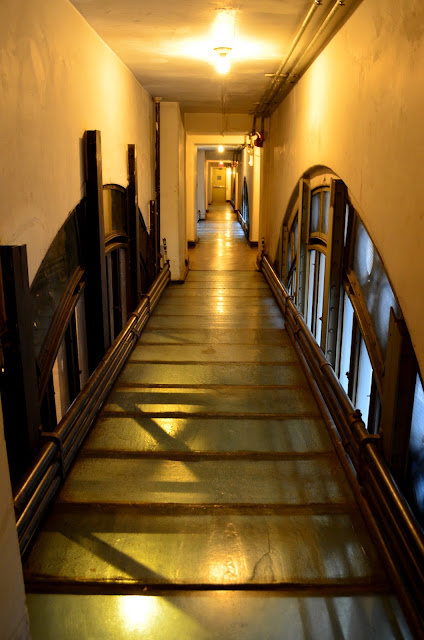 The view from up there is pretty great, too. 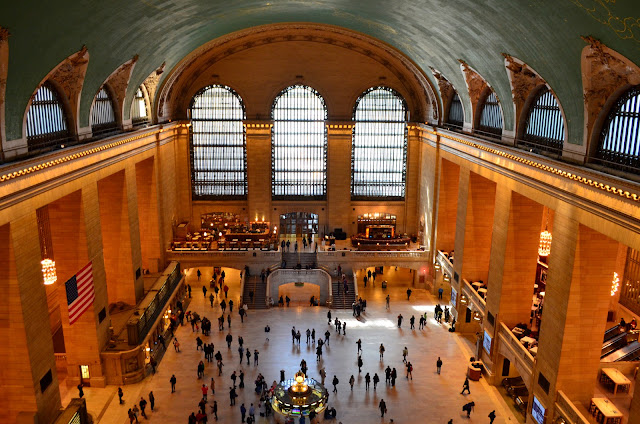 Back down on solid ground, we walk under many of the 35,000 exposed light bulbs... 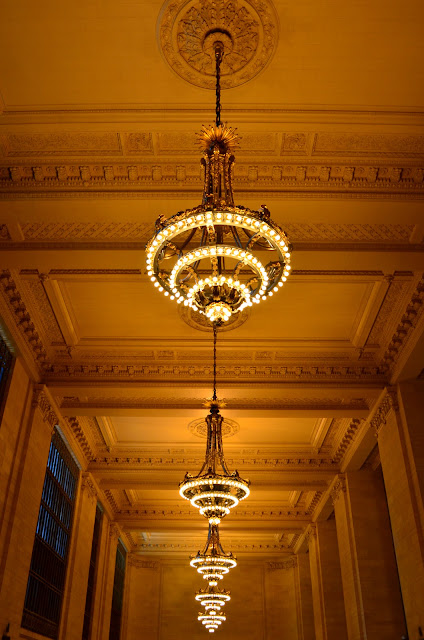 ...to the 2,000 sq-foot (186 sq-m) chamber between the Main Concourse and Vanderbilt Hall, just outside the Dining Concourse. Here, you will find what many call the "whisper gallery". To get a little thrill, just plant your nose in one of the corners, and whisper whatever you'd like to someone doing the same in an opposing corner. 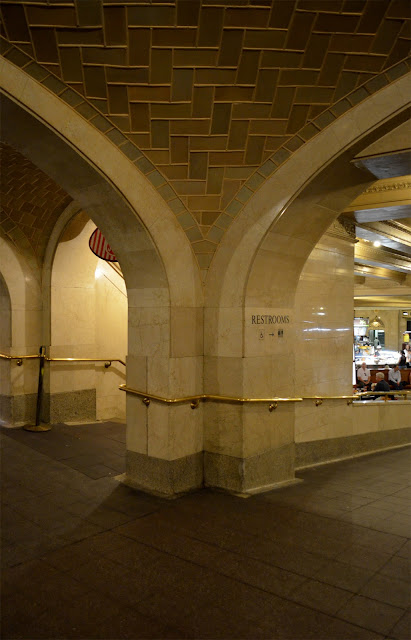 Oddly enough, no one knows if this effect was purposefully created, or is a happy accident of its construction.
As previously mentioned, Vanderbilt Hall is right next to the Dinning Concourse. 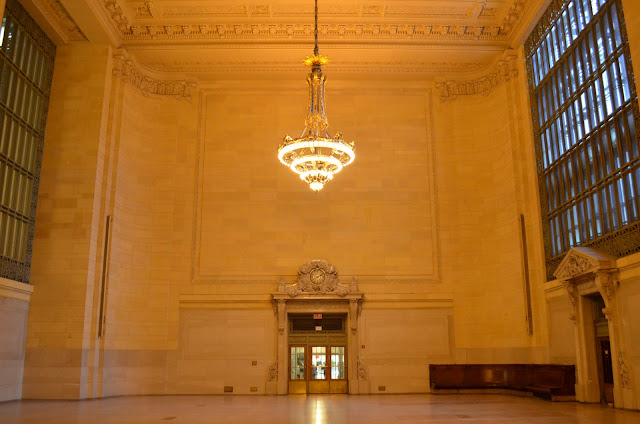 This area used to be Grand Central Terminal's waiting room, but is currently only used for special events or the terminal's yearly Christmas Market. Though roped off, one can venture in, and see the depressions made on the marble floor (worn out from 100 years of commuters' footsteps).
Heading underground, thirteen storeys down in fact... 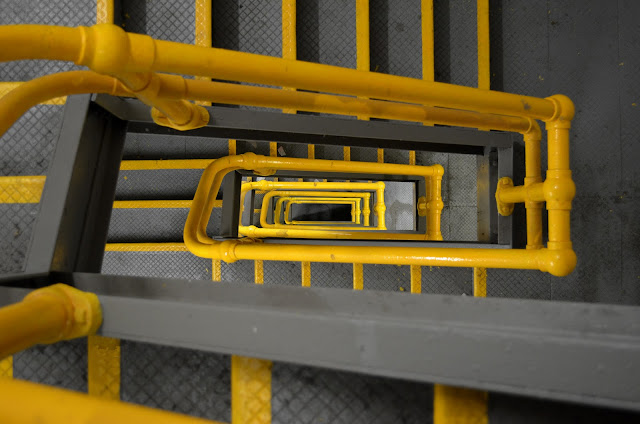 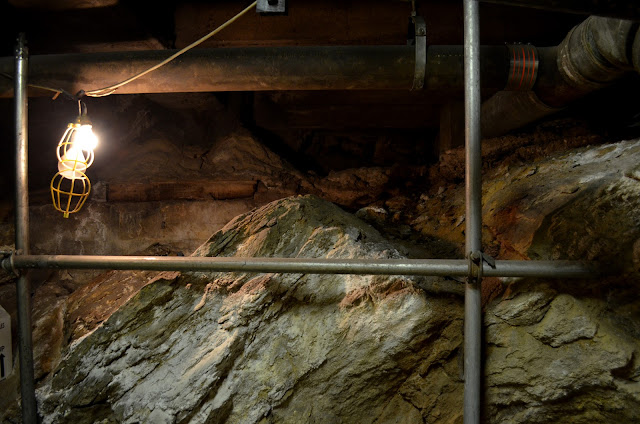 ...into one of the world's deepest basements. The 49-acre (20 ha) sub-basement is the largest in the city. It holds one of the most infamous rooms, known as M-42, which accommodates the old rotary AC-to-DC converters. Though all rail lines now run off solid-state converters, these old machines once supplied track current, nonstop. 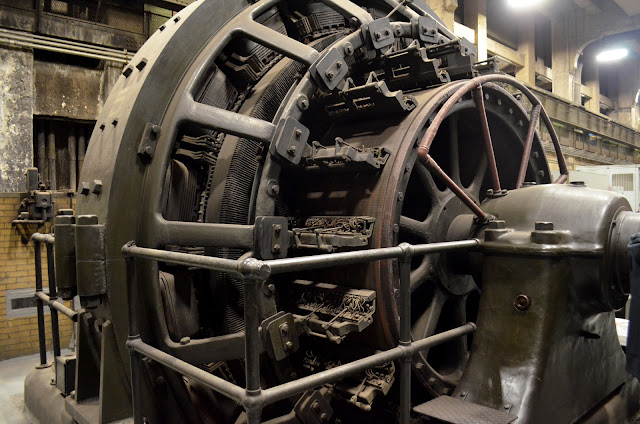 Because of that, the room isn't even on Terminal blueprints. Well, that, and fear of subterfuge.
You see, in June of 1942, the Germans launched "Operation Pastorius", where four Abwehr agents were dropped off by submarine off the coast of Amagansett in Long Island (another four landed in Ponte Vedra Beach, FL). They were to sneak into M-42 with explosives, and destroy it, as well as a list of bridges, water treatment plants, and other rail stations. 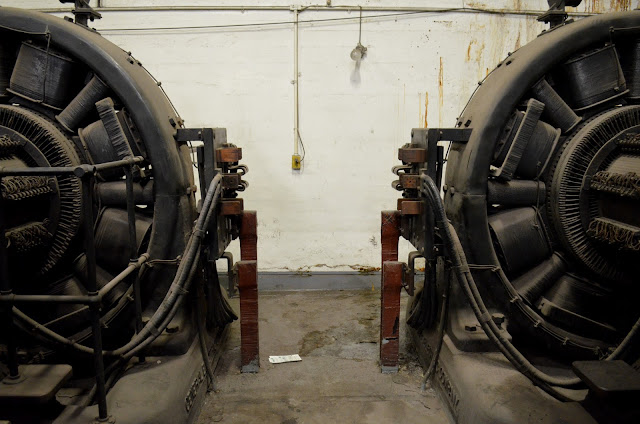 The plan failed after one of the crew, George John Dasch (who disagreed with Nazi policies), gave up the rest.
The room known as M-42 also has what is considered to be the world's first electronic computer. It was built by Westinghouse Electric Corporation, in 1913, to help the terminal find trains that had broken down in tunnels. It was run through the use of an electric cord a conductor could pull if stalled, causing a bell to ring. 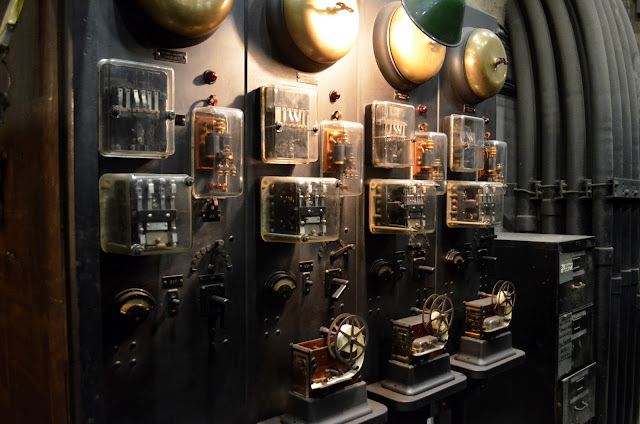 The system became obsolete by 1922, thanks to radio communication, but the computer is still on display, intact.
Last stop for this post is just under the Waldorf Astoria Hotel... 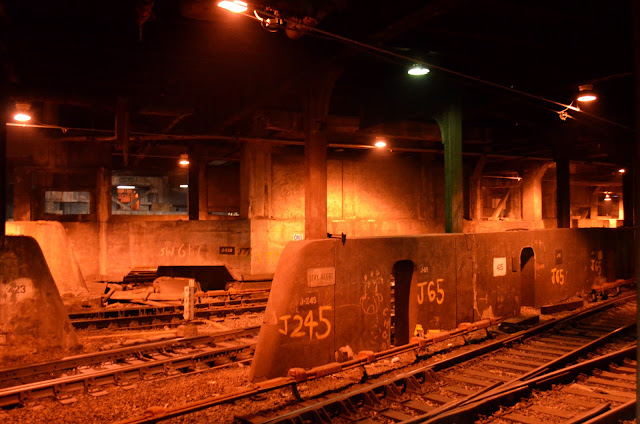 ...and is known as Roosevelt's Station, though officially titled Track 61. 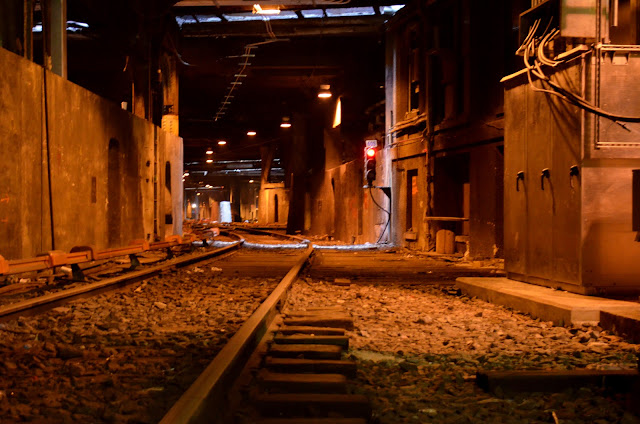 The abandoned train line was built in 1929 for all sorts of VIPs, with the first to use the track being General John "Black Jack" Pershing in 1938. It was made most famous by Franklin D. Roosevelt, and used to hide his disability due to polio.
The train that now sits there is said to be FDR's personal armored train car, but a simple internet search of the car's serial number shows it is an old Metro North Commuter baggage car parked there in 1985. 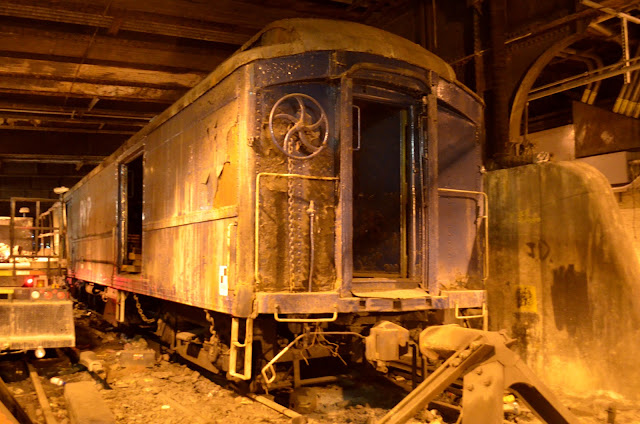 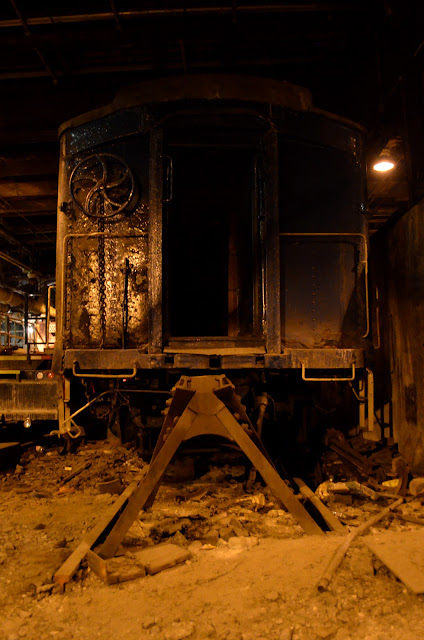 Still, the elevator that used to take FDR and other important folks up to the hotel is there, though - admittedly - not as exciting to see. 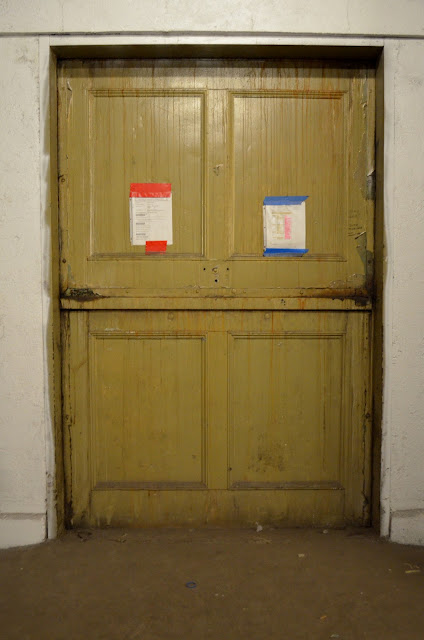 Thanks for coming with me this far, as I hope to continue to keep posting way past this anniversary.
Posted by A156