Continuing our walk in Midtown Manhattan head over to Fifth Avenue, and 42nd Street, to see the Main Branch of the New York Public Library, known as the Stephen A. Schwarzman Building. It holds a lot of inspirational material, both, works that will inspire you, and pieces which have inspired famous writers.
One collection the building holds is what influenced Alan Alexander Milne to write the children's favorites, Winnie-the-Pooh in 1926, and the 1928 follow-up, The House at Pooh Corner.
Passing through the main entrance, between the lions Patience & Fortitude (which were originally called Leo Astor, and Leo Lenox, after the library’s philanthropist founders, John Jacob Astor and James Lenox)... 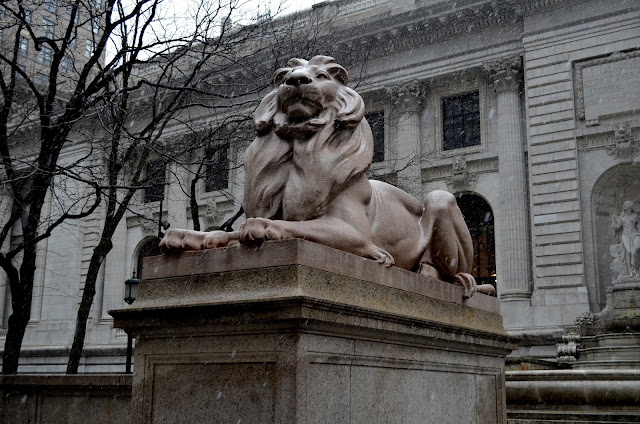 ...turn right, and then - at the end of the hall - left toward the Children's Room. There you will find a group of stuffed animals under glass. These toys belonged to Christopher Robin Milne, son of Pooh author A.A., and were what influenced him to take literary trips to The Wood. Within the casing you can see the original Eeyore, Tigger, Piglet, Kanga, and Edward Bear (later renamed "Winnie-the-Pooh"). 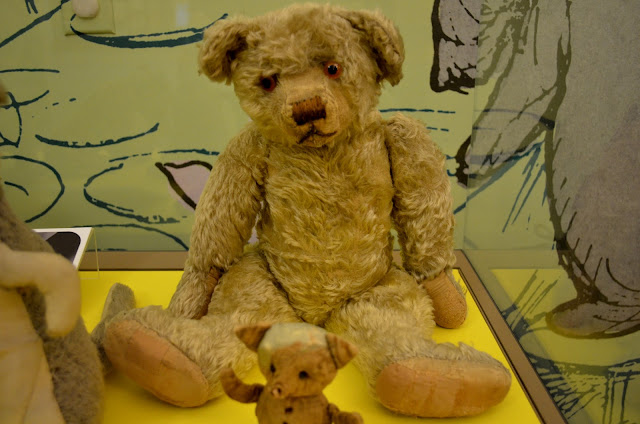 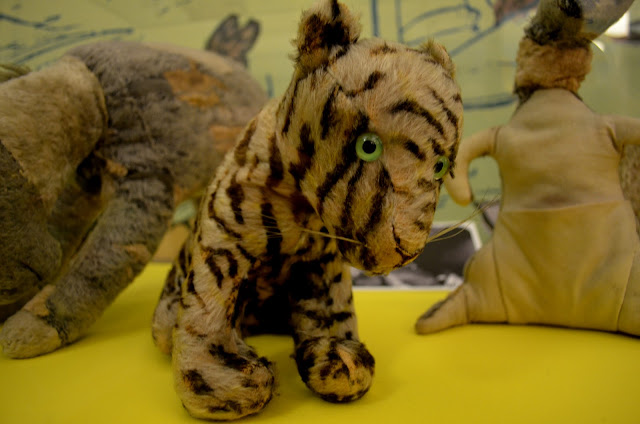 Sadly, Roo had been lost for some time, and is not with his friends. In 2009, Lottie the Otter, was added to the bunch to advertise the Disney book Return to Hundred Acre Wood, but has since been removed.
The doll assortment was purchased at action by Milne's U.S. publisher E.P. Dutton for $2500, and donated to the Main Branch of the NYPL in 1956. 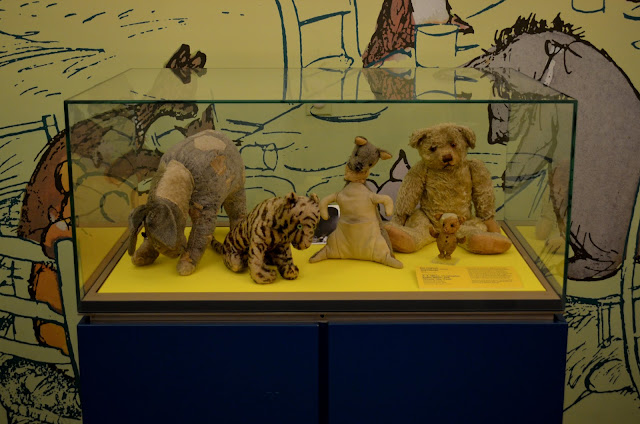 While the Pooh assemblage alone is a great reason to visit this branch of New York City's many libraries, there is so much more to see just at this one branch.
The building still holds parts of the original Croton Distributing Reservoir, which served as a basin for the city's drinking water from 1842 until 1899 (built after it was a potter's field)... 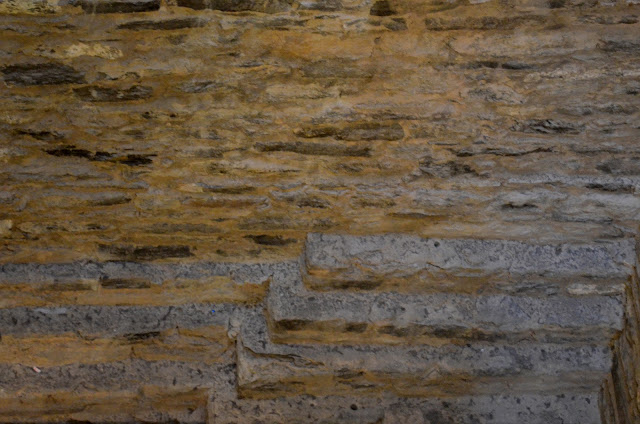 ...and beautiful pre-WWII swastikas, which adorn the marble walls. 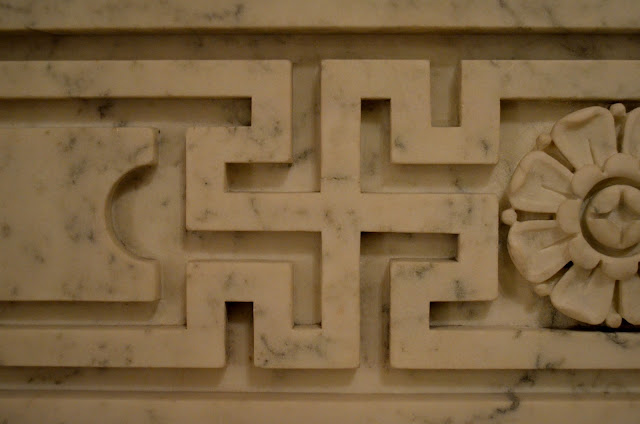 The Schwarzman Building holds many other oddities, such as a lock of hair from Frankenstein author Mary Shelley (in the Pforzheimer Collection), 40,000+ restaurant menus, cuneiform tablets dating from 2050 B.C. (within the Manuscripts and Archives Division), an 1820 letter from a dying John Keats to his sweetheart, a first print of the Declaration of Independence, Walt Whitman’s personal first edition copy of his book, Leaves of Grass, Charles Dickens' cats paw letter opener (in the Berg Collection room), an original copy of a Gutenberg bible... 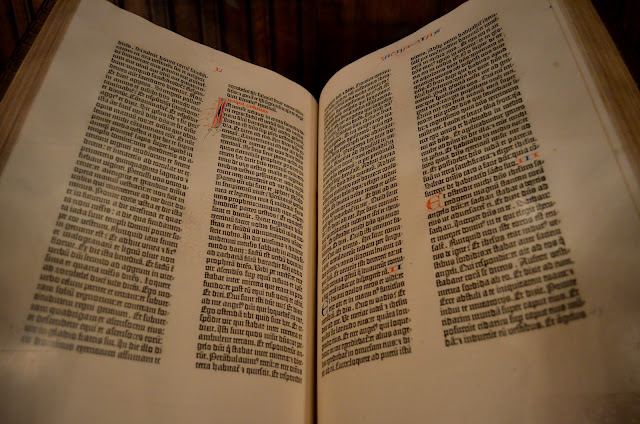 ...and quite a number of antique phone booths. 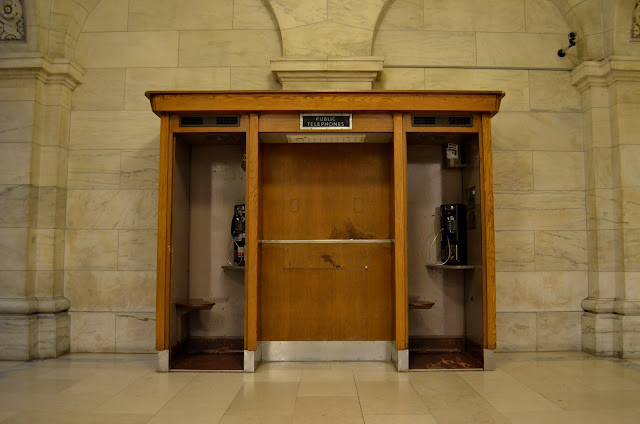 There are also plenty of free exhibits every so often (check their website here for events), but this library also contains wonderful permanent art adorning the halls, such as the ceiling of the McGraw Rotunda. 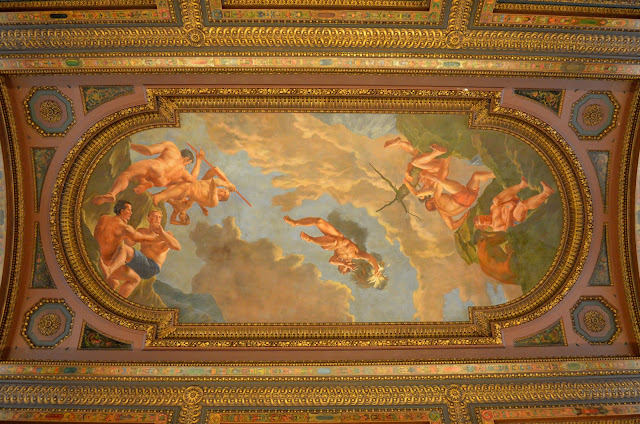 While one can visit their website for info, if you have a question - any question under the sun! - you can call their Answer Zone at 917-ASK-NYPL (917-275-6975), which has been in service since 1968.
When done indoors, head outside - behind the library - to Bryant Park. This area was designated a public space as far back as 1686 by New York's colonial governor, Thomas Dongan. In 1823, the location was turned into a potter's field (a burial place for the poor and undocumented) until 1840.
In 1980, Dan Biederman (chairman of Time, Inc.), and Andrew Heiskell (of the New York Public Library), founded the Bryant Park Restoration Corporation, and began to restore the land. Around this time the library built huge storage facilities under the park, as the public space was renovated above ground. Still, it's odd to find a merry-go-round spinning atop a graveyard, but this blog's all about the weird. 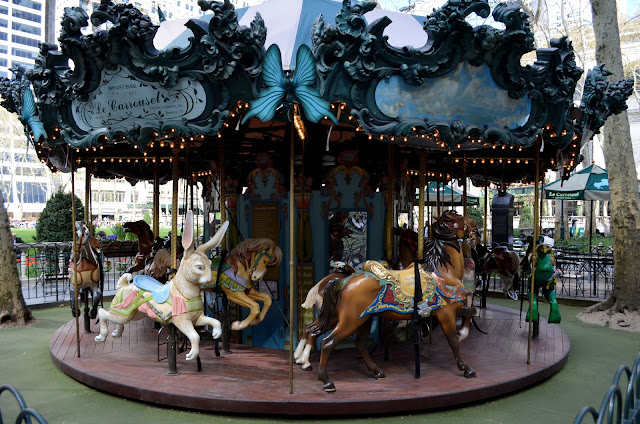 As you circle about, you can check out many of the statues in the park such as a bronze sculpture of Mexican president Benito Juárez (by Moises Cabrera Orozco), one of writer Gertrude Stein (by Jo Davidson), and a bust of German poet Johann Wolfgang von Goethe (by sculptor Karl Fischer). 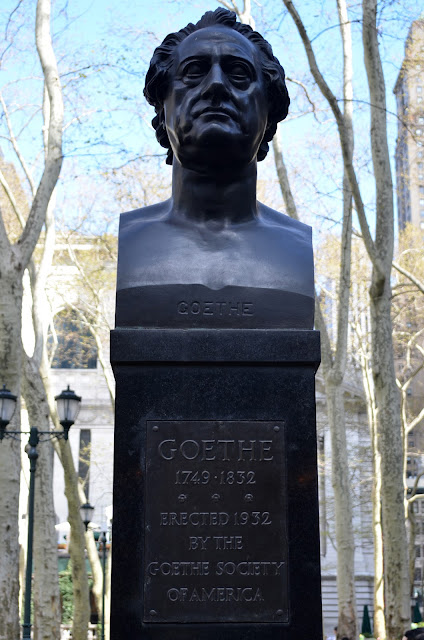 Placed on a Swedish, black, granite pedestal, the bronze statue was originally displayed at the Metropolitan Museum of Art, but was relocated to Bryant Park in 1932. 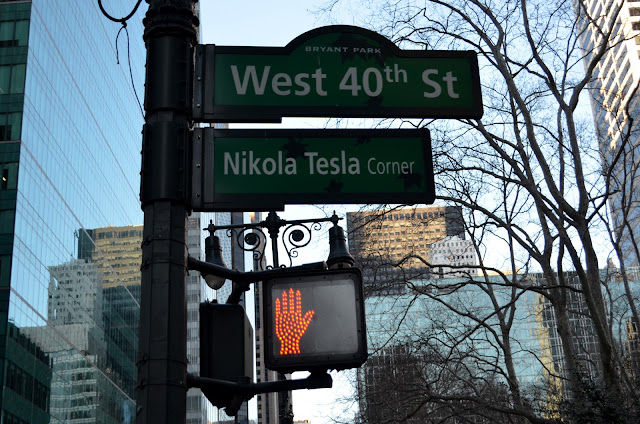 Lastly, one shouldn't forget that the SW corner of the park (W 40th Street and Avenue of the Americas) is Nikola Tesla Corner.
Posted by A156

The three main spots I'll be writing of this time around are all almost next to one another in Midtown Manhattan.
Starting at 154 W 55th Street, and - almost directly across from a very odd street sign - 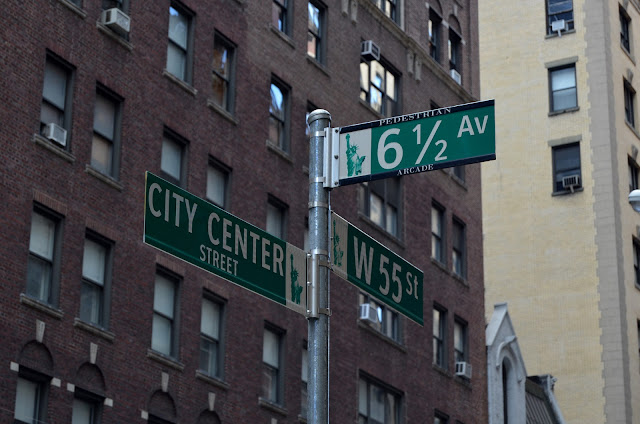 there is an old stable house that still stands. It is the last of a half-dozen that peppered the immediate area. 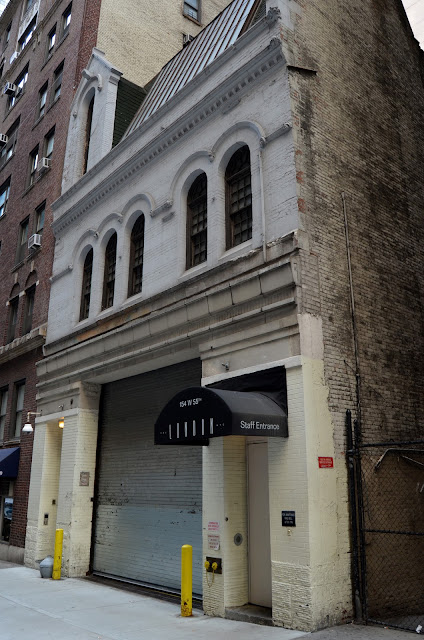 Built in 1888 by Charles T. Barney (president of the Knickerbocker Trust Company), the ground floor was for the horses of the area's wealthy. The second floor was for the stable workers' living quarters, but the top floor was rented out cheap to artists who could stand the smell. 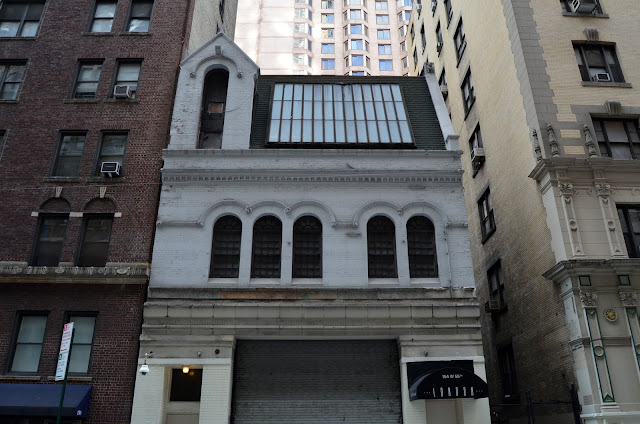 Known as the Holbein Studios they were home to art luminaries like impressionist Frederick Childe Hassam, Cecilia Beaux and John Singer Sargent (who was the leading portrait paint of the time).
Next is around the block, located two streets up, at 123 57th Street. There, one can see the only ATM in New York City that pays out in gold coins or bars. 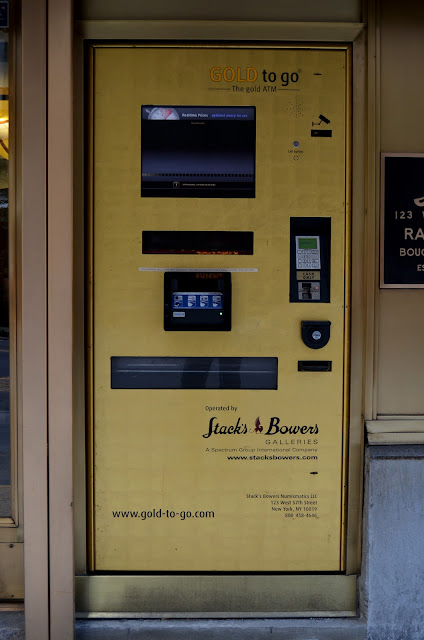 Installed in front of a coin store in 2012, it is currently still there, but out of commission. If it were working, I am curious as to how many people would actually use it? 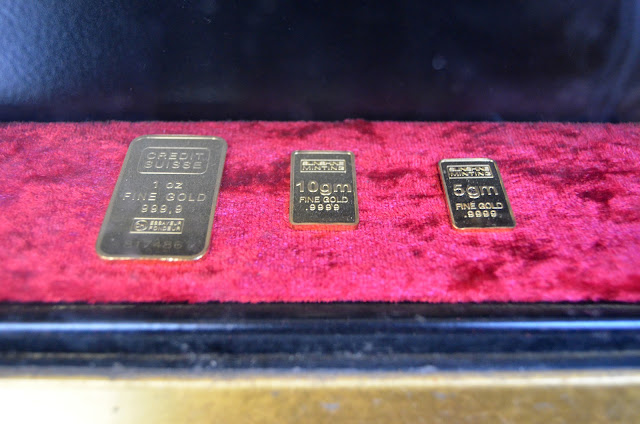 The only other ATMs in the U.S. that also distribute gold can be found at two Golden Nugget Casinos; one in Las Vegas, and the other in Atlantic City.
Lastly, march one block east to see a huge number nine in front of the Solow Building at Nine 57th Street. 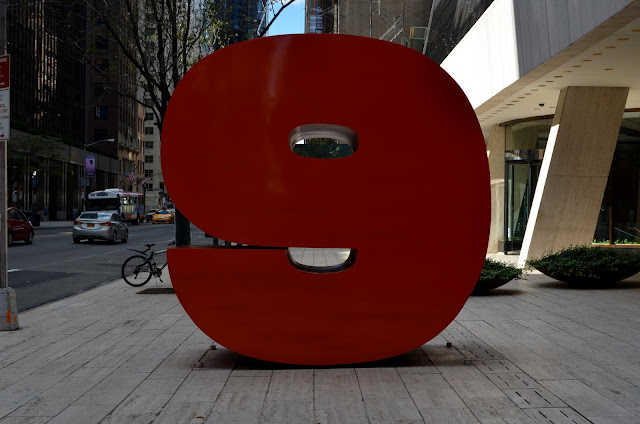 Weighing in at two tons (1.8 tonnes), the work was erected in 1974, and was designed by artist Ivan Chermayeff. The piece was created - believe it or not - to distract one's eye from the fact that the slope of the Solow Building reflects a poor view of the neighboring properties.
If you find yourself with time to kill, and you want to stay in the district, I have two more sites you must see. They are a bit of a walk from 57th, though I don't think chess fanatics will mind the trip down to 48th to see a giant chessboard.
While the official address of the board is 767 3rd Avenue, you will find it against the side of 212 E 48th Street. 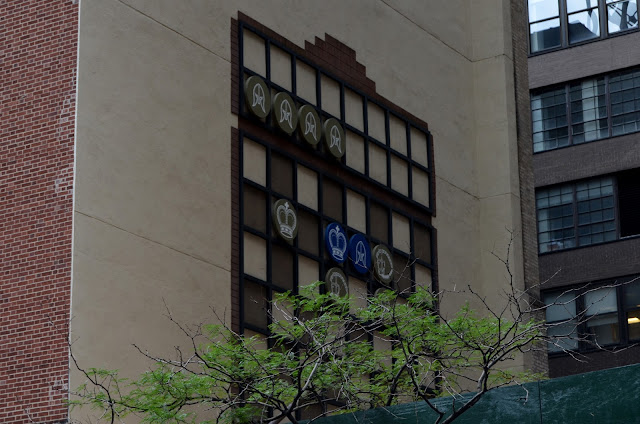 The four-storey high chessboard uses 2ft (0.3m) diameter pieces, in blue and beige, to recreate world famous matches. A flag indicates whose move is next, with the corresponding piece's action committed each Wednesday. The curious may enter the lobby of the board's address to ask the concierge for a pamphlet on the current game in progress.
The second stop is one which you'll need a few hours to completely take in, so I'll save it for a post of its own. Tune in later this month.
Posted by A156