In 1991, a $275 million project began for the construction of a federal office building at 290 Broadway in the Civic Center section of Lower Manhattan. In October of that year, the General Services Administration announced that intact burials from the largest colonial-era cemetery for freed and enslaved Africans had been discovered during excavations. Though an Environmental Impact Statement was commissioned upon purchase of the site, archaeological surveys predicted no remains would be found, due to the long history of development in the area.
As the GSA attempted construction and excavation at the same time, the African-American community felt the graves were not receiving proper respect, and the area required a more thorough archaeological study, as well as a plan to protect the remains.
In 1992, they halted construction, and a fund was set up to handle further excavations. In total, 420 burials were found, but historians estimate 15,000 to 20,000 were buried during the 1700s, in what was called the "Negroes Burial Ground", which is New York's earliest known African-American cemetery.
While the site became a National Historic Landmark in 1993, and the Ted Weiss Federal Building was soon finished, an area was set aside to rebury the remains. Congress approved the funds for a memorial in 2003, and it was made a National Monument in 2006, though the monument was not completed until 2007. 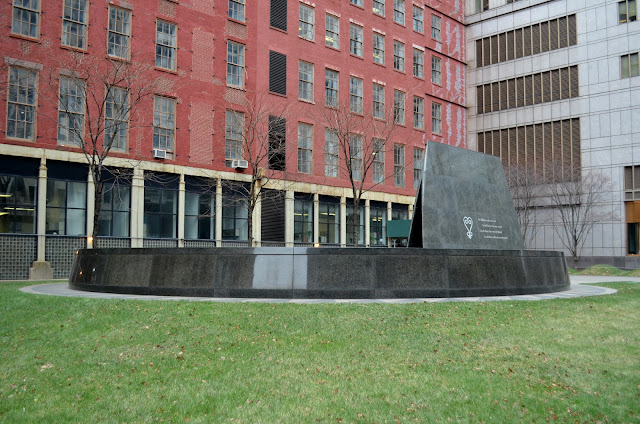 Made of granite, from South Africa and the United States to symbolize both coming together, the 25 ft (8 m) shrine holds, within an area named the "Circle of Diaspora", a map of the Atlantic ocean known as the Middle Passage, where slaves were transported from Africa to North America. One may enter the circle via the Ancestral Libation Chamber, through "The Door of Return", which is in reference to "The Door of No Return" (a name given to West African ports involved in the slave trade). The mounds located before the monument's door are where the remains were reinterred . 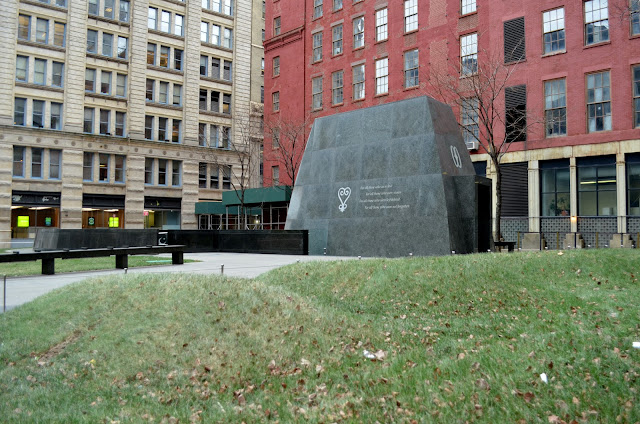 In 2010, a museum was opened inside the Ted Weiss Federal Building, to give visitors a history of the finds, as well as of the site. Within the permanent exhibit, "Reclaiming Our History", Amaze Design and Studio EIS created a life-size depiction of African immigrants performing a funeral for an adult and child. There is also a wall with all 420 photos of the remains found... 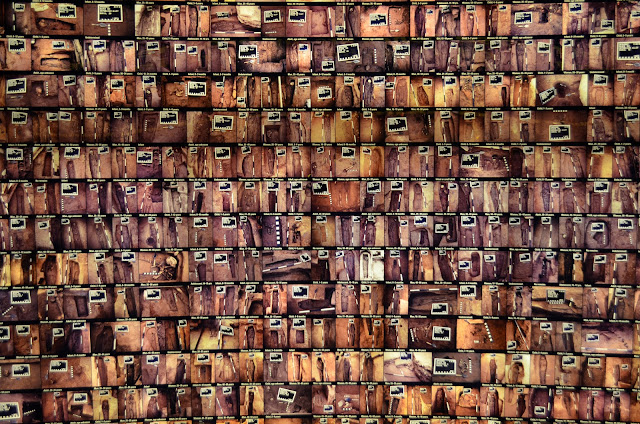 ...as well as artifacts of those inhumed, including money, jewelry, clothing and tools, plus a replica of the wooden Ghana reburial coffins where the deceased were re-entombed. 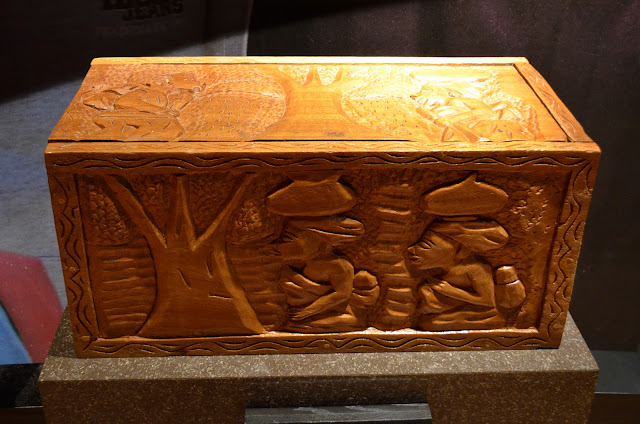 Once done with your visit there, you can walk a few blocks over, just behind 1 Police Plaza, to also see the last remnant of the Rhinelader Sugar House that was believed to have once been used as a prison by British forces during the American Revolutionary War. 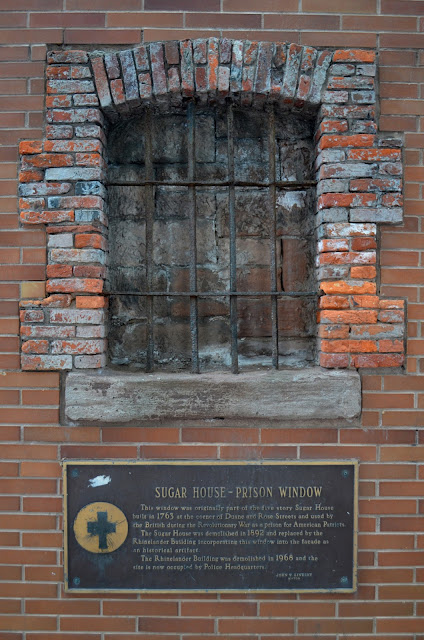 Just off Duane Street, the window is embedded into a wall of a small utility building behind the New York Police Department Headquarters, and dates to 1763. The sugar shack / sap house was replaced by an eleven-storey loft building called Rhinelander Building in 1892. That multi-unit home was demolished in 1968 to make way for the NYPD HQ.
If you'd like to see more of the old Rhinelader Sugar House you'll have to visit Van Cortlandt Park in the Bronx, which holds a large section of the building, but I'm saving more on that stop for another post.
Posted by A156

The Rarely Seen of Central Park

I don't often cover highly trafficked spots here, but if you're stuck with a group who wants to go to Central Park, why not show them to what often goes unnoticed in Manhattan's largest natural ground?
With over 40 million visitors per year, there are a few areas often not trampled by tourists, though sites like the Alice In Wonderland statue are definitely a sight to see. 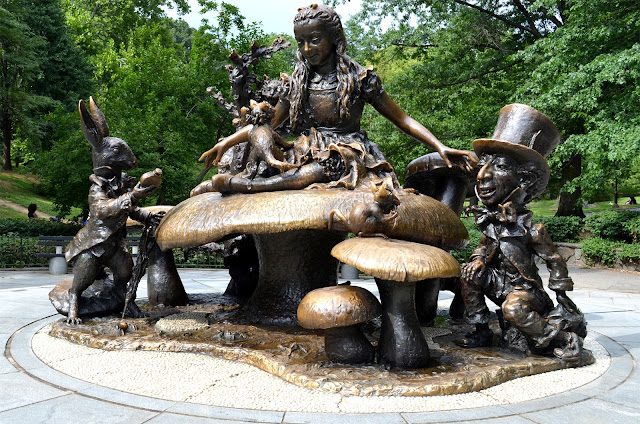 Commissioned by philanthropist George Delacorte, created by Spanish sculptor José de Creeft, and cast by Modern Art Foundry of Long Island City, the bronze statue was dedicated in 1959, and contains seven bronze plaques with the lines from the poem The Jabberwocky.
Otherwise, we'll begin in the northwestern section of the grounds, and work our way around, starting with Blockhouse No. 1, which is the second oldest structure in Central Park. 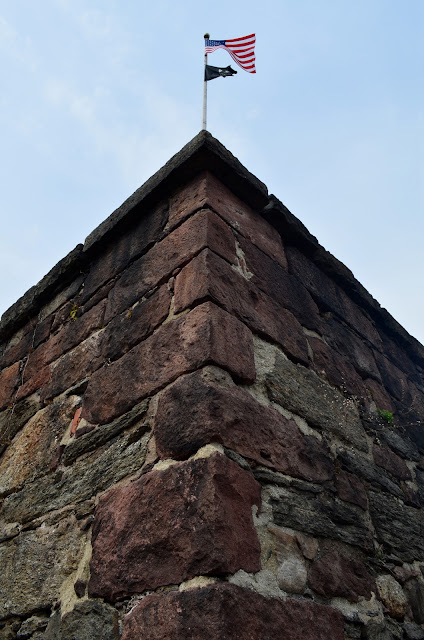 While the foundation dates back to the time of British occupation, the fort that now stands there was finished in 1814, for the War of 1812, two days before the Treaty of Ghent was signed. 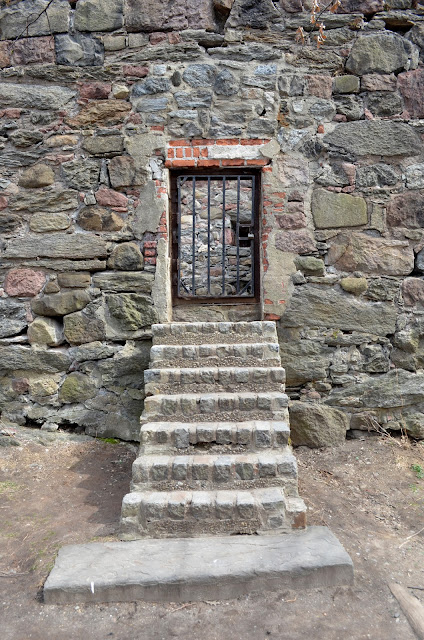 Assembled by volunteers out of red sandstone blocks carved from the Manhattan bedrock, under the direction of General Joseph Gardner Swift, the station was built awaiting a British invasion that never came. It was later used for storing ammunition, and then as a location to celebrate patriotic holidays.
While continuing south, one can stroll through the North Woods for some bird-watching, and find themselves in The Ravine, which holds many wonderful man-made waterfalls that flow from the stream known as The Loch. Created by Frederick Law Olmsted and Calvert Vaux, the area was planned as an escape from the urban environment, and is one of the few spots in the park where you cannot see the city. 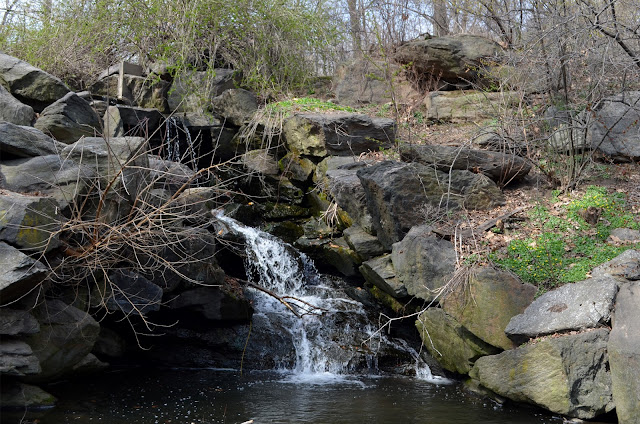 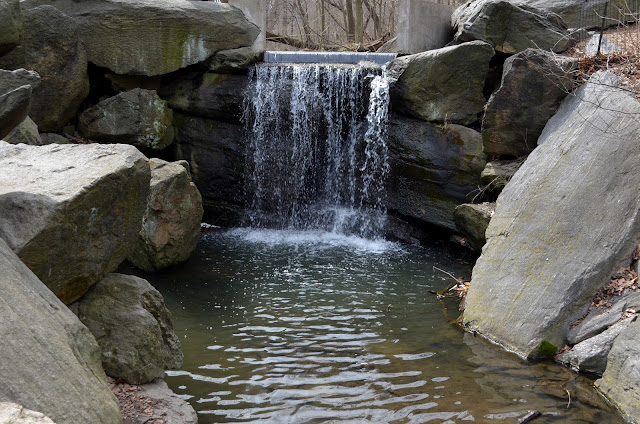 The area also has Huddlestone Arch... 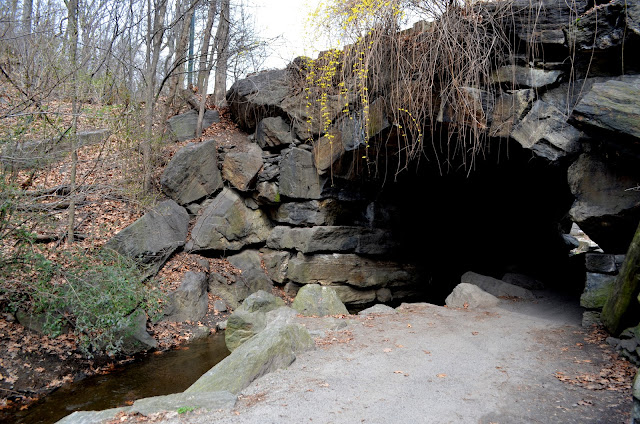 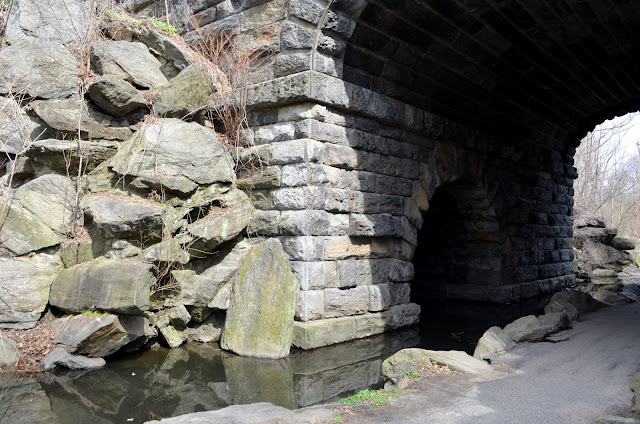 Walking the  west side of the park, the next stop stems from 89th to 81st Street, and is called Seneca Village.
Nearly 200 years ago, it was the largest community of free African-American property owners in New York City, after Andrew Williams and Epiphany Davis purchased land there in 1825. By 1855 the area had 250 residents, and held 70 houses, but public acquisition of the land began the following year. The New York State legislature authorized the use of eminent domain, and moved out the close to 1,600 people who lived within the range zoned for the creation of Central Park.
After public interest grew, archaeologists and scholars began excavation of the site in the late 90s, with the founding of The Institute for the Exploration of Seneca Village History in 1998. One of the foundations of the homes can be seen just south of Mariner's Gate Playground, near West 84th Street. 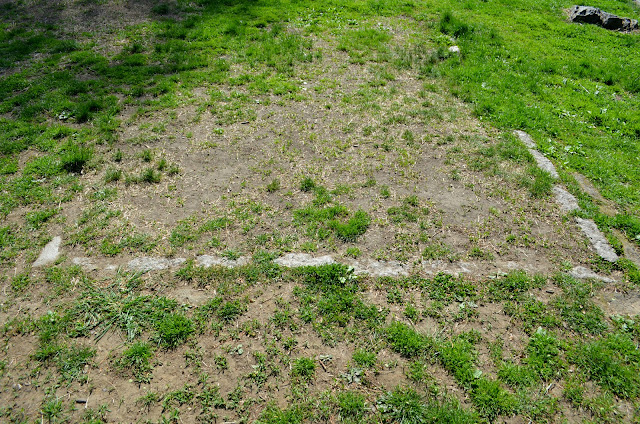 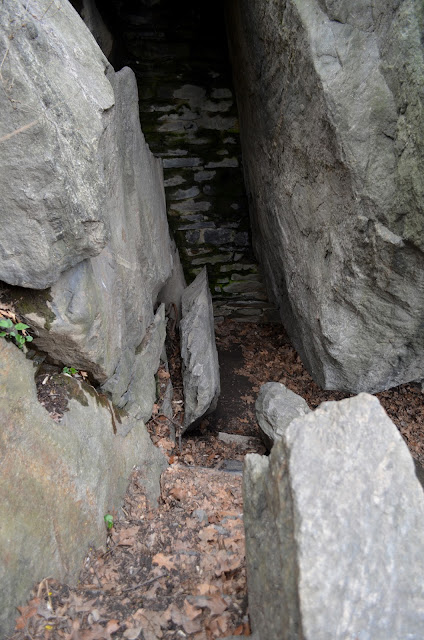 Originally discovered filled with fertile soil, the cave was soon emptied. Though opened as a popular attraction near the Ramble Arch, the entrance was sealed off in the 1930s. Along the public path, one can still see the steps leading to the cave's opening. 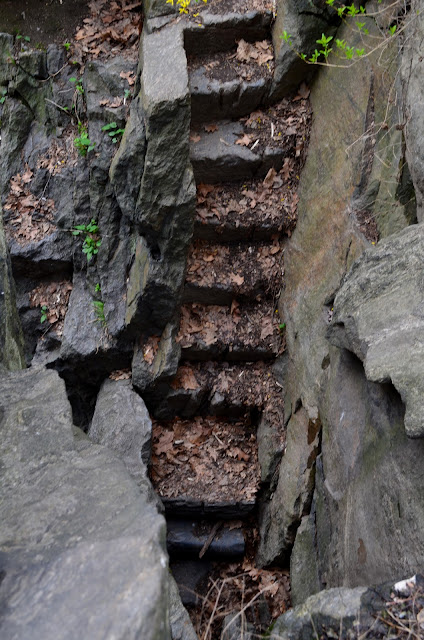 Throughout The Ramble (as well as much of the park), you can also see many of the 450 million-year-old boulders pushed here by the Wisconsin glacier about 12,000 years ago. 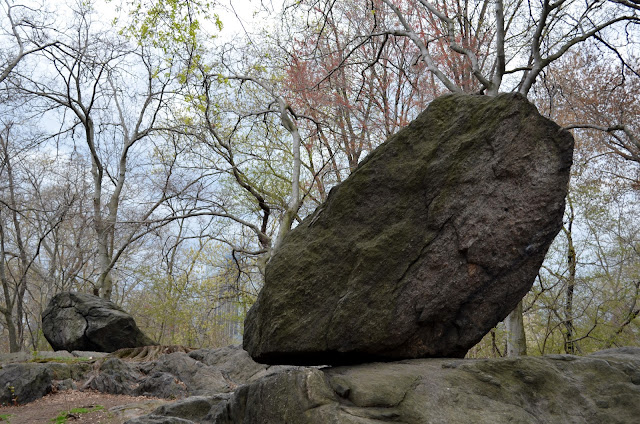 The next location is normally kept secret, so it's for serious hunters only: the Central Park Bolt. 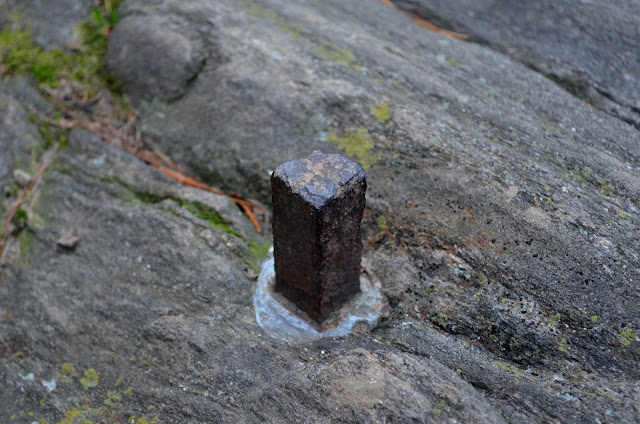 Found north of 65th Street, in line with The Dairy, the survey bolt is believed to be one of the only left from John Randel's city grid, known as The Commissioners’ Plan of 1811.
Heading back north, and on the eastern side of the park, we come across the King Jagiello Monument. 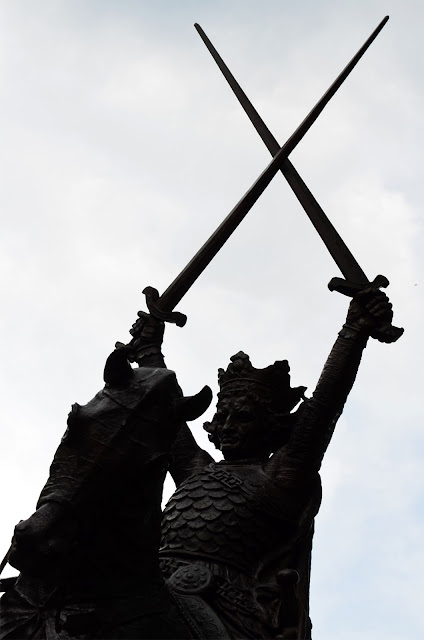 This statue is of of king of Poland and Grand Duke of Lithuania, Władysław II Jagiełło. Built for the 1939 New York World's Fair, by Polish sculptor Stanisław K. Ostrowski (commemorating the Battle of Grunwald in 1410), it originally stood at the Fair's entrance. The bronze monument was a replica of a memorial in Warsaw, but that one was converted into bullets by Germans after the occupation of their capital during World War II. The replica was moved to Central Park in July of 1945, and unveiled by Polish Count Józef Kazimierz Krasicki.
Just a few steps north, and behind the Metropolitan Museum of Art is an obelisk from Heliopolis, Egypt. It dates to the time of the 18th Dynasty of Thutmose III (1479 - 1425 BCE), and actually has nothing to do with the reign of Cleopatra. 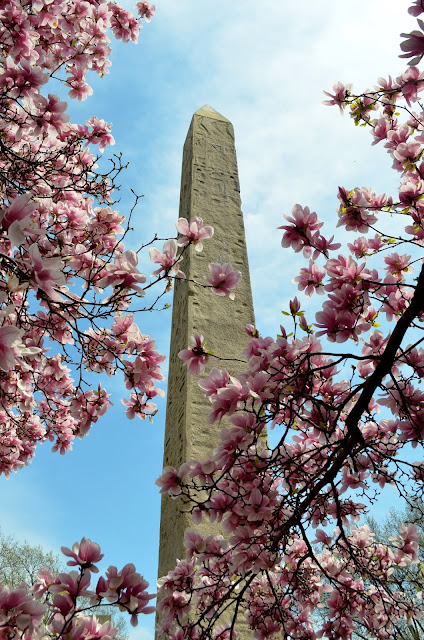 You can read more about the oldest, man-made object, found outdoors in New York City, as well as see other photos, in an earlier This Hidden City post here.
Keep walking north on the park's east side, and you will come to the Conservatory Garden, designed by Gilmore D. Clarke, landscape architect for Robert Moses. The entrance is the old Vanderbilt Gate, that previously allowed access to the courtyard of Cornelius Vanderbilt II's chateau on 58th Street and 5th Avenue. While this is a nice break on this walk, I'm more interested in letting you know about the remains of the 1842 Academy of Mount St. Vincent, now known as McGowan’s Pass. 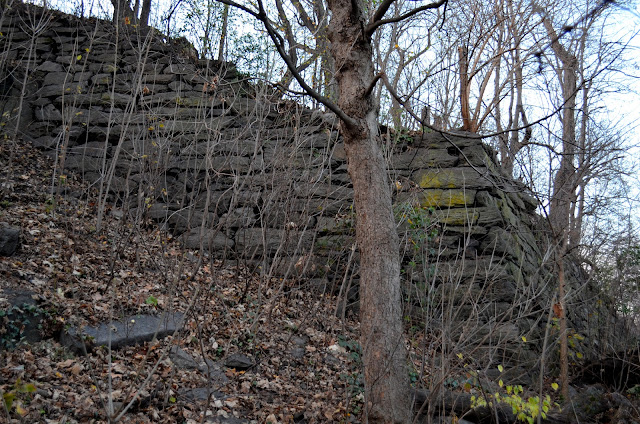 The Academy closed in 1850, and was replace by a hotel, as well as a museum, and a tavern. The first tavern burned down in 1881, and another (McGown’s Pass Tavern) was built in its place. While torn down in 1917, the original foundations are still there, but Central Park Conservancy uses much of the field for the production of mulch and compost.
Right nearby is Fort Clinton, and its two cannons - one of which is 230 years old, and was recently (2013) found to be fully loaded. 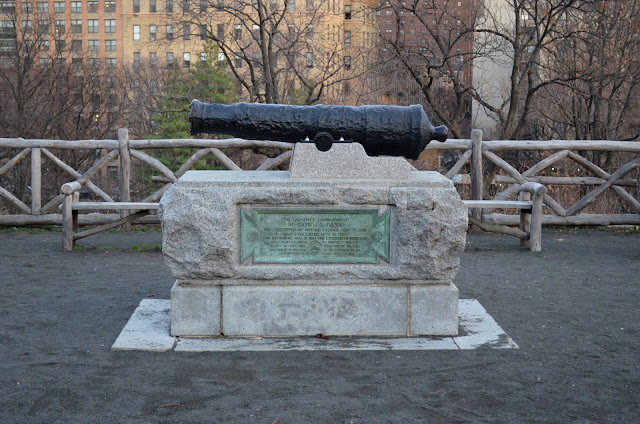 The once-armed weapon was from a sunken British ship in the East River. It was donated to the park in 1865, and moved around, until finally installed at Fort Clinton in 1905. Removed in 1996 by the Central Park Conservancy to protect it from vandalism, workers cleaning it found it was still loaded. The gunpowder has since been removed, but the cannonball is still within the chamber.
For jazz fans, the last item of note is for you, and while it may seem outside the boundaries of Central Park, it is considered part of it. It's a small circle plot on the very northeast corner, known as Duke Ellington Circle (formerly named Frawley Circle), at 110th Street and Fifth Avenue, and it holds a 25 ft (7.6 m) tall, bronze statute of Edward Kennedy "Duke" Ellington, and his piano, held up by nine nude caryatids. 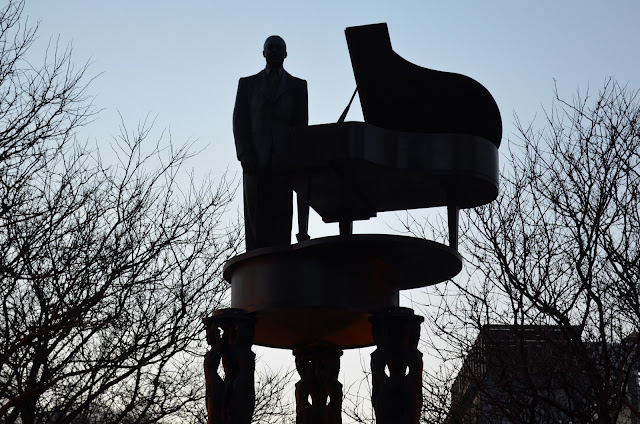 The memorial was created by Mexican sculptor Robert Graham, and erected in 1997, thanks to the Duke Ellington Memorial Fund.
Posted by A156