A Walk Through Bed-Stuy

If you find yourself near where I live, Brooklyn's Bed-Stuy neighborhood, this is a tour of the interesting things in the area, that is so short (2.5m / 4k), it will only take about an hour of your time.
We begin at the enclave of Weeksville in Crown Heights. The village was founded a little after its namesake, freed Virginian slave James Weeks, bought a plot of land in central Brooklyn's Ninth Ward from another free African-American, Henry C. Thompson, in 1838 (eleven years after New York abolished slavery). At the time, black businessmen and investors purchased land in the surrounding borough's then-called Bedford Hills area, creating  one of the nations first freemen villages, with more than 500 residents by 1850. 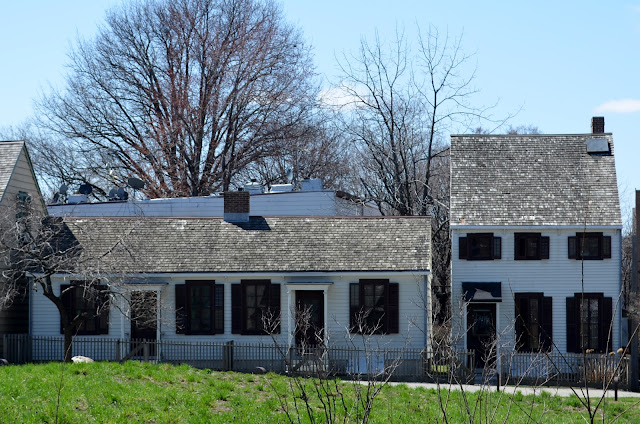 On Buffalo Ave, between Bergen St and St Marks Ave, you can take tours of some of the original homes at the Weeksville Heritage Center (every Wed & Fri @ 3pm - click here for more info), and that includes seeing the Hunterfly Road House, which was built around 1840. 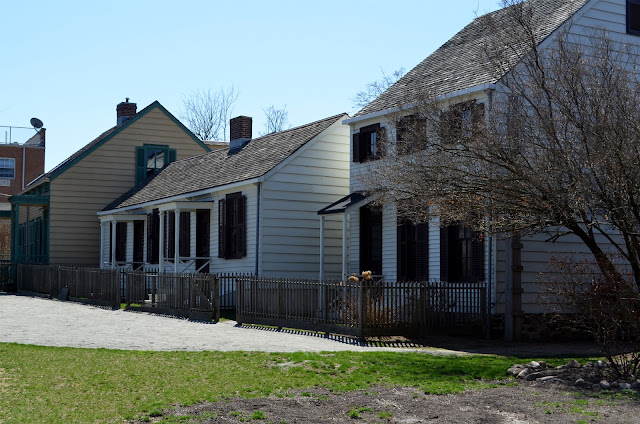 Heading west, we zigzag through Bed-Stuy to see the "Queen of Hancock Street", the Moran Victorian Mansion, at 247 Hancock Street. 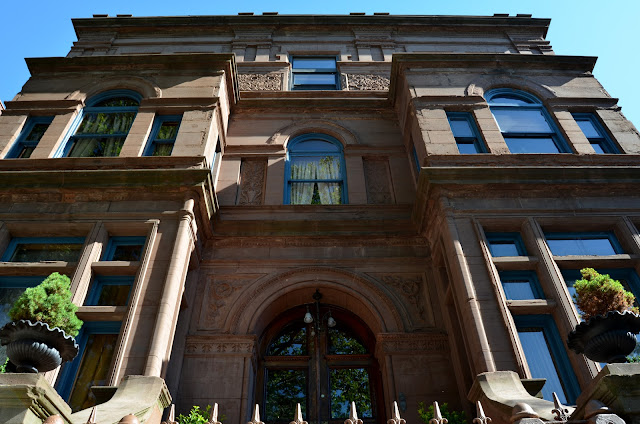 This huge home was constructed for water-meter magnate, John C. Kelley, in 1887, by the then-still-very-young Montrose W. Morris, who modeled the home after Vanderbilt's Fifth Ave estate. 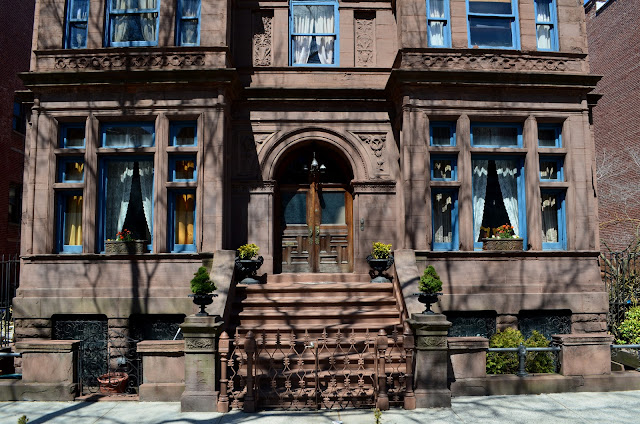 When headed to the next stop, you can see two other Morris-developed beauties - Renaissance Apartments (on corner of Hancock), and The Alhambra (two blocks south on the corner of Macon St) - on Nostrand Avenue. Of course, Morris' creations make up only a small part of the 577 buildings landmarked within the Stuyvesant Heights Historic District.
Before the last stop, two blocks west of Nostrand, we have the infamous mural of Ol' Dirty Bastard's 1995 debut LP, on the corner of Franklin and Putnam Aves. 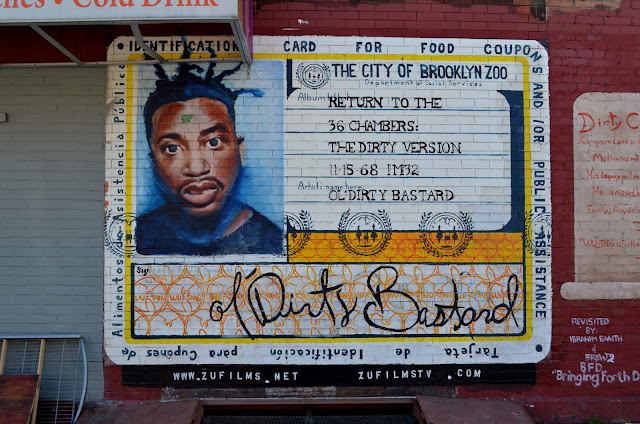 It was first painted by Vic Goldfeld (see original here) in 2006 for a documentary, but later repainted by Ibrahim Yaqut in 2010. The owners of the storefront holding the work claim visitors as far as France have come just to photograph the scene.
This trip ends in the Clinton Hill neighborhood, on the corner of Gates and Grand Aves, at The Vendome. 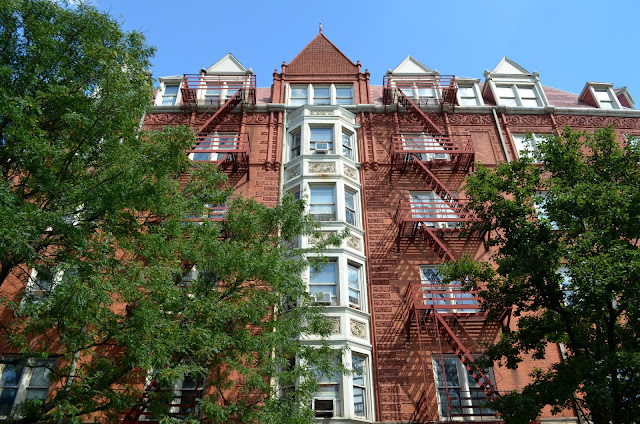 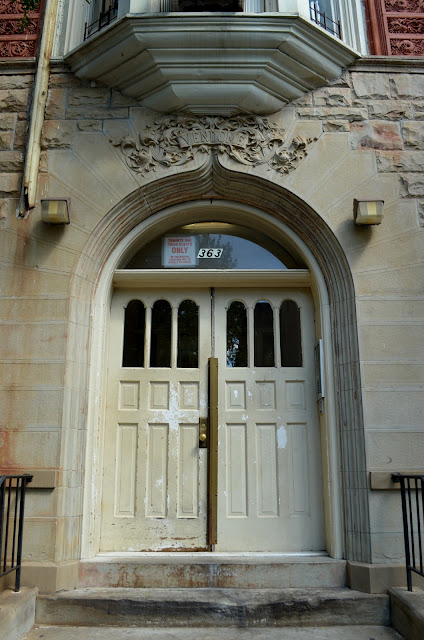 The six-story structure was seized in 1982 over taxes, after it sat in disrepair since a fire left it a mere shell in 1980. It was to be demolished in 1987, but many in the area fought to save The Vendome from destruction. 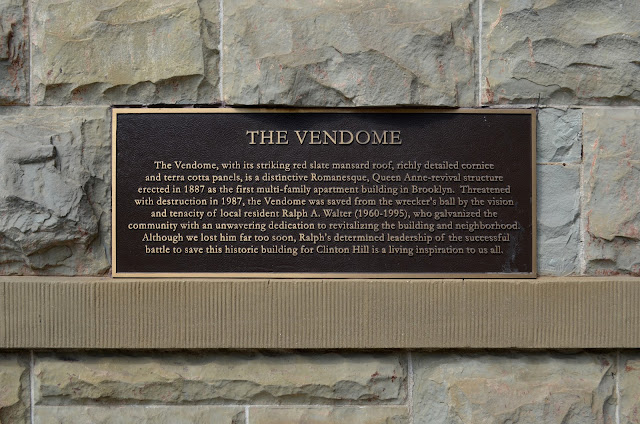 It was finally given a grant the following year by the Office of Parks, Recreation and Historic Preservation to repair and restore the 24-unit home.
Posted by A156

If you find yourself passing through Manhattan's 4th busiest subway station, Union Square, be sure to look all around for what's outlined in red. 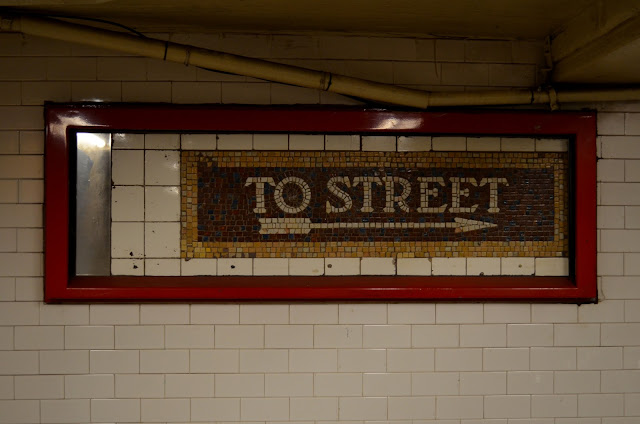 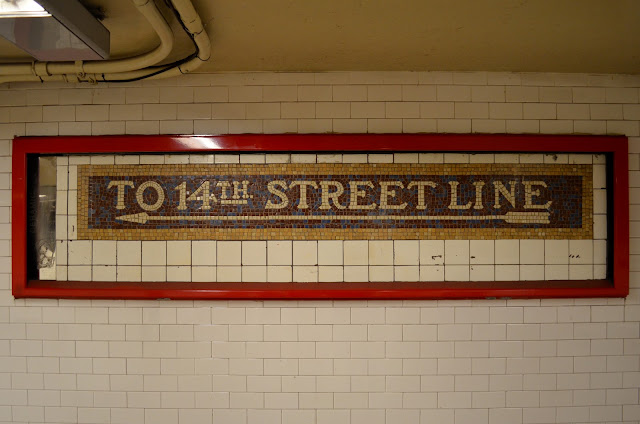 It is all one art project, titled Framing Union Square, by artist Mary Miss (and architect Lee Harris Pomeroy), which was installed in 1998 on 115 locations within the station, asking the public to "look below the surface, to see a slice of the station, its structure, its history." 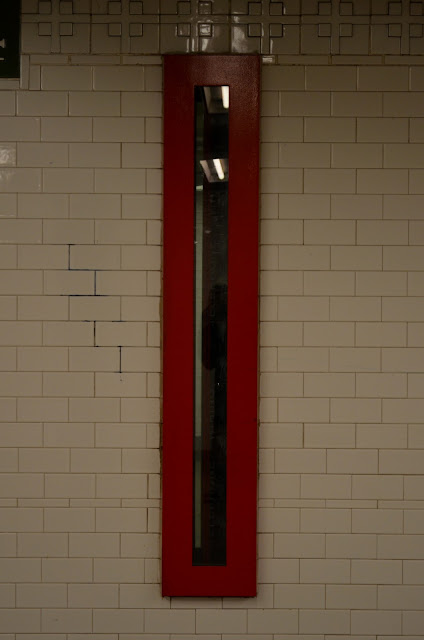 The red metal borders surround old mosaics, steel work, even rivets and wiring, as well as six large pieces of the original 1904 wall from when the station was built. 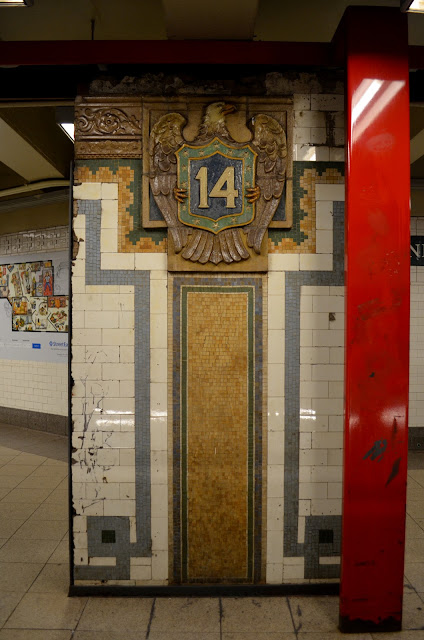 If you have time to make it above ground to Union Square Park, head to the north side, and see a memorial that may upset members of the Turkish government.
Planted in April of 1985, the row of trees on the north end of the plaza are to commemorate the 1.5 million Armenian lives lost in the genocide of 1915 to 1923. On the northeast corner - where the trees end - there is also a plaque, which was then installed by the soon-gone Armenian population of the Murray Hill area (once called "Little Armenia"). 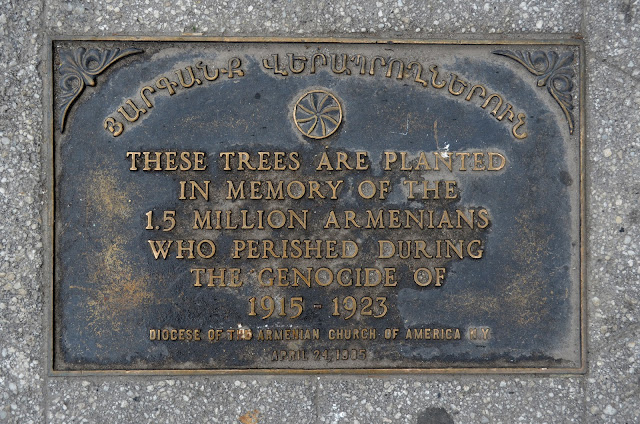 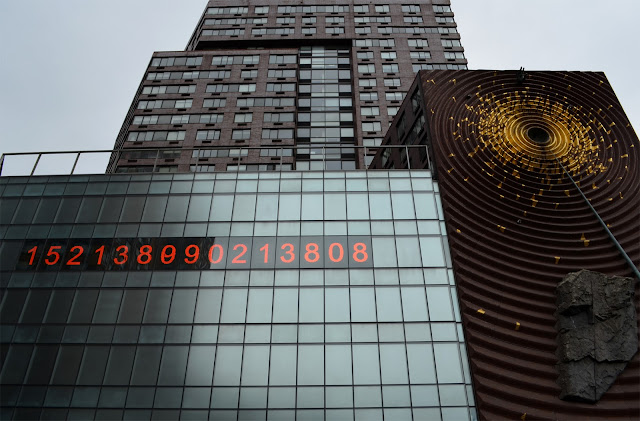 At a cost of 4.2 million, and paid for by the NYC real estate firm The Related Companies, the installation is considered one of the largest private commissions in public art.
Built from February to October of 1999, the artists released a statement that the piece was to be an "investigation into the nature of time".
The work consists of "The Passage", the most eastern portion, which displays the time in a 24-hour format through 15 LED digits. The time below reads: "152047861123908", it means that the time is 15:20 (3:20 PM) and 47.86 seconds, and that there are 8 hours, 39 minutes, and 12 seconds left in the day. 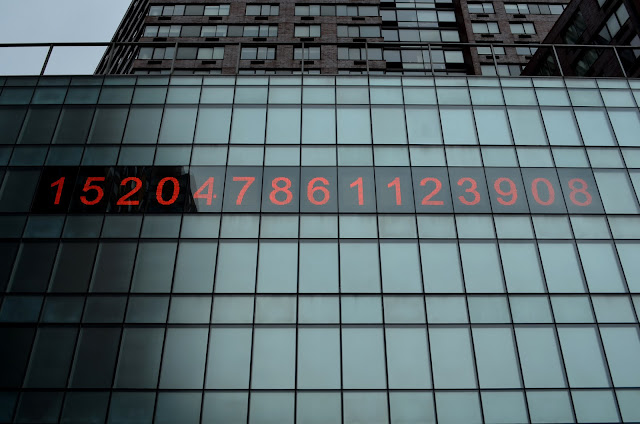 There is also the much more esoteric center triptych, consisting of "The Relic" (a bronze hand), "The Infinity" (a circular wave pattern), and "The Source" (a golden emanation from a black hole, which pours out white steam at noon and midnight). 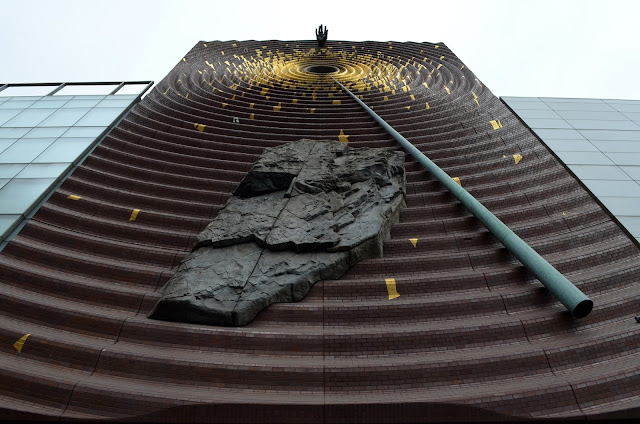 The third, seemingly-untitled section, was not photographed, as it's simply a rotating sphere near the corner of a large grid of metal.
After seeing what the artist themselves call "the most unloved piece of public art in the city", and you are still up for more in the park, there is a nice bronze statue of Mohandas Gandhi somewhere in the southwest section. It was installed on the 117th birthday (1986) of India's champion of nonviolent protest, and placed there by the Gandhi Memorial International Foundation.
Posted by A156

Between Greene and Wooster, at 129 Spring Street, sits a hip clothing store one would normally expect to find in Manhattan's SoHo neighborhood.
A little more unexpectedly is that the fashion house holds a haunted well in the men's department - just head downstairs. 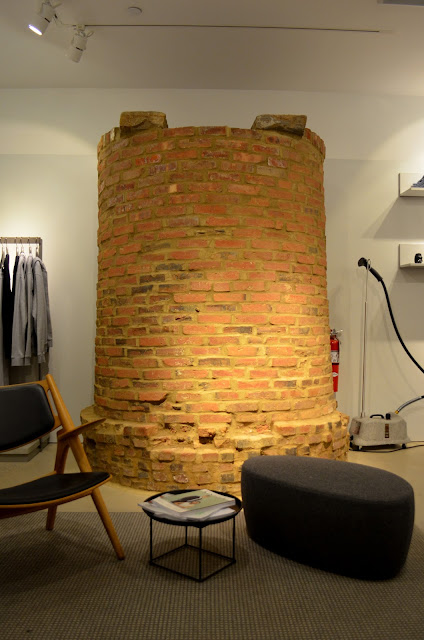 The story goes that, in 1799, Gulielma Elmore Sands was having a secret affair with 22-year-old carpenter Levi Weeks, who lived at the same boarding home. On December 22nd, she left to meet her paramour, but hadn't returned. Her dead body was found almost two weeks later, in the infamous Lispenard’s Meadow Well, which has been standing in every business that has made the spot its home. 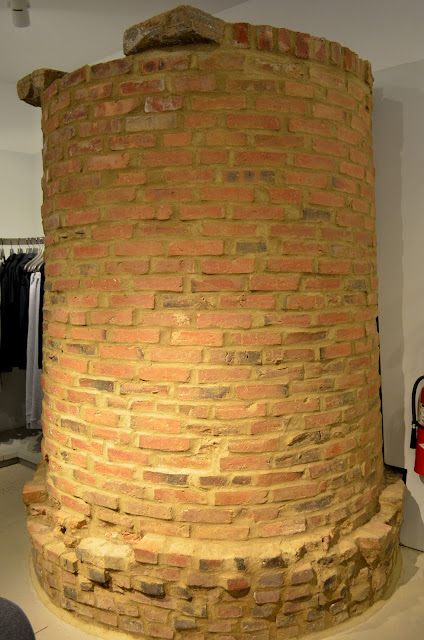 Though known in the press as the Manhattan Well Murder, Weeks was acquitted, and set free. Even though the prosecutor was the future Mayor of New York, Cadwallader D. Colden, Weeks was probably cleared thanks to a dream team of lawyers (Henry Livingston, Aaron Burr, and Alexander Hamilton) paid for by his well-to-do brother in the construction trade, Ezra.
Since 1860, it has been said that Sand's ghost was seen hanging around more than once, appearing as either a white-shrouded figure, or flashes of light above the well's opening.

After gawking at such a sight, just turn the corner on Greene, and head north until building number 110, the SoHo Building, to find Belgian artist Francoise Schein 's Subway Map Floating on a NY Sidewalk. Similar works of her's can be found in Paris, Stockholm, and Berlin. 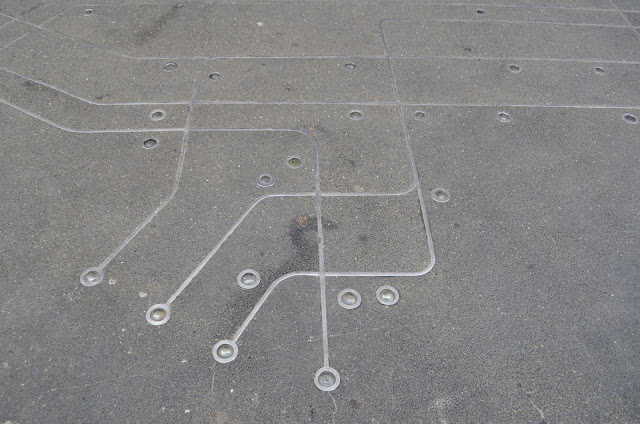 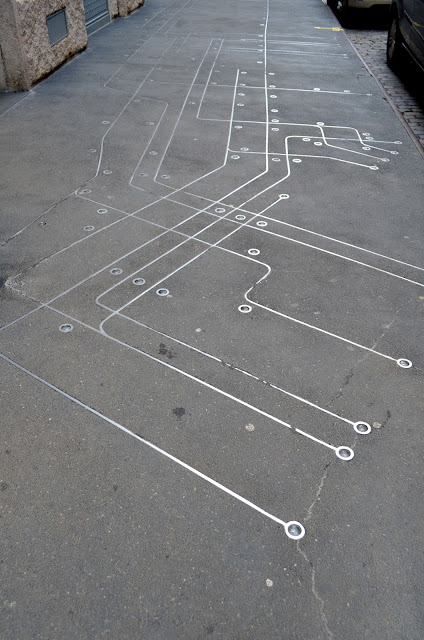 The installation cost Goldman Properties $30,000, and ran along the entire length of the front of the building, but won them the 1986 City Art Commission award for that year's best art project.
Posted by A156