Just like my "West Village Weird" pieces (see part one here, and two here), I'm setting this up as a walk through parts of the East Village, as well as a bit of the Lower East Side, in Manhattan.
Unlike the West Village, the east side has less outlandish spots to see, but there are still quite a few interesting things about the area.
We'll start out on an odd little lane, Stuyvesant Street, near the corner of 10th Street, where stands the oldest house in the Village. 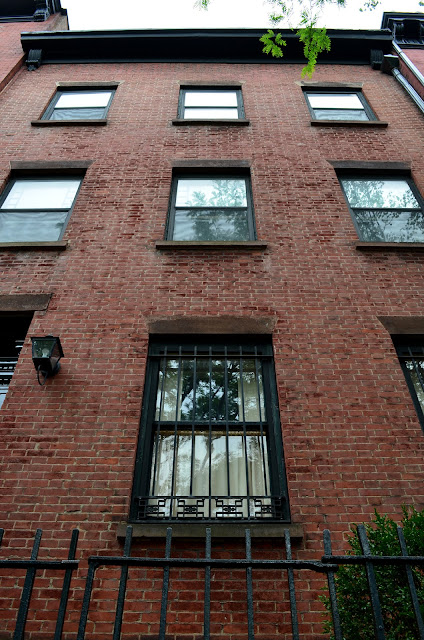 Built for Nicholas William Stuyvesant in 1795, the building was made a landmark as part of the St. Mark’s Historic District in 1969. It is thought to be the third oldest residential home on the island of Manhattan. On the same block is No. 21, which was built in 1803, by Petrus Stuyvesant for his daughter Elizabeth. After she married Nicholas Fish, the property became known as the Stuyvesant Fish House.
Walking a block over to the southeast corner of 2nd Avenue and 10th Street, we have the Yiddish Walk of Fame. 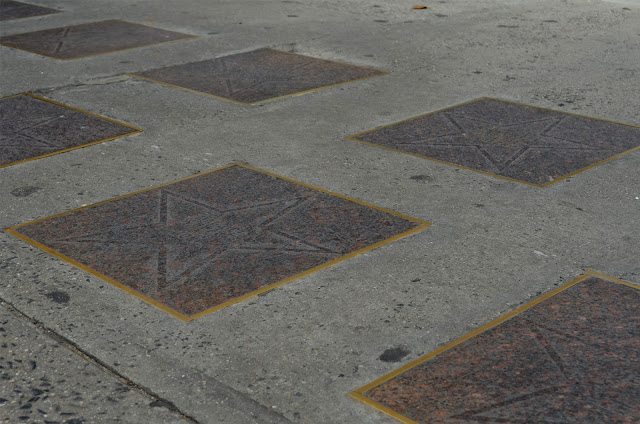 2nd Avenue was known as "Jewish Broadway" from 1890 through 1930, and when the owners of Second Avenue Deli thought to honor the local Yiddish community in 1985, they figured something similar to Hollywood's Walk of Fame in front of the restaurant might work. Though the names may be unfamiliar to most, the biggest celebrity on the sidewalk is Paul Muni (born: Meshilem Meier Weisenfreund) who played in I Was a Fugitive From a Chain Gang. In 1996, the owner, Abe Lebewohl, was murdered, and years later a dispute with his brother and the landlord closed the deli for good - it's now a bank.
If you're into history, or just old buildings, and continue east on 10th Street, until you reach Avenue D, you have the old Dry Dock Banking House, at 145 Avenue D. 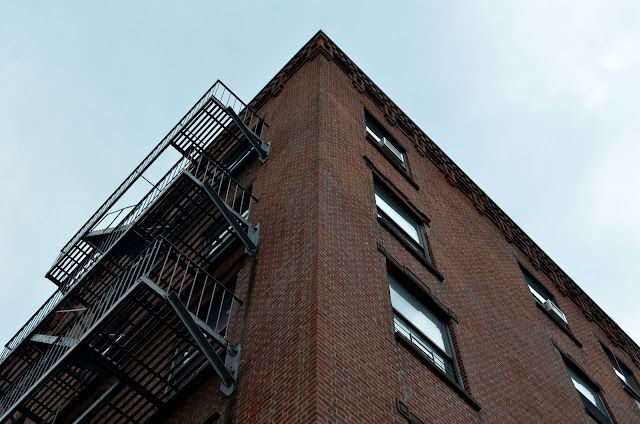 It is the third oldest building in the Village (and oldest in its Alphabet City section), as it was constructed in 1825. The place used to only house those working at the docks along the East River, but after the property was sold by the company, it became a boarding house up until 2005.
Heading down, and west a bit, we come to Tompkins Square Park, as well as St Mark's Place - both having so many wonderfully weird things about them, that I wrote a whole piece last year (read that here).
One place I didn't mention in that article is the Museum of the American Gangster. Located in the downstairs parlor of a building originally once owned by mobster Frank Hoffman, the spot was a jazz club in the 60s, where greats like John Coltrane played. After a few years as a theater run by Howard Otway, his son Lorcan turned it into what it is today. Though a bit steep in price, visitors can see crime-related items such as the bullet which killed Pretty Boyd Floyd, John Dillinger's death masks, and casings from the final shootout between the cops and Bonnie and Clyde.
Back on 2nd Avenue, just north of St Mark's Place, one can see what many believe to be the most beautiful building in all the East Village: the Stuyvesant Polyclinic. 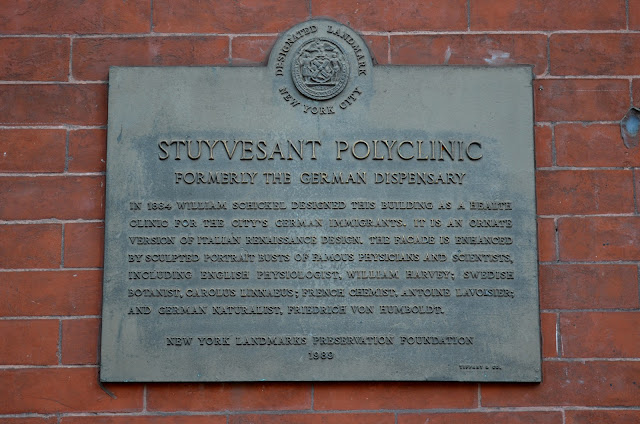 Constructed in 1884, in a neo-Italian Renaissance style (by German architect William Schickel), the facade of the building holds a number of terra cotta busts of philosophers, and scientists, such as Hippocrates, Linnaeus, Alexander von Humboldt, and Anders Celsius, 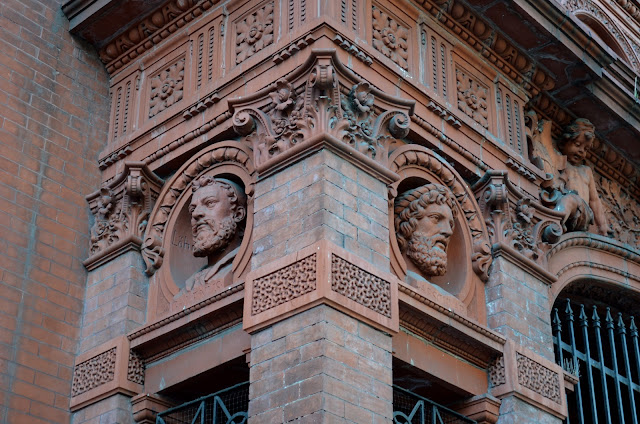 Known as the German Dispensary, they offered free medical care to the poor German Americans of what what then known as "Little Germany". During WWI's anti-German attitude, the clinic changed its name to Stuyvesant Polyclinic of the City of New York. By 1954, the hospital had treated its 6-millionth patient. Soon after the building was designated a landmark (1976), the clinic was bought out by the Cabrini Medical Center. Though closed in 2007, the Cabrini Center was founded by the first U.S. saint, Mother Cabrini, whose mummy lays in Washington Heights (see my post about her here).
Further south, one can visit the Merchant's House Museum, also known as the Seabury Tredwell House. Located at 29 East Fourth Street, it is the only 19th Century home in the area that is completely left intact, inside and out. Built in 1832, by hat-maker Joseph Brewster, philanthropist, and cousin to the owning family, George Chapman, thought to make it a museum in 1936. With its well-preserved period rooms, the old home is known as "the most haunted building in Manhattan".
Still on 2nd Avenue, but now between 2nd and 3rd Street is the New York Marble Cemetery. 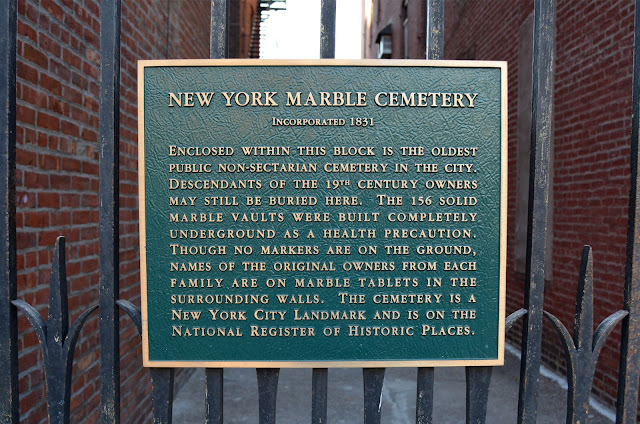 Founded in 1830, it is Manhattan's oldest non-sectarian burial place, and it is believed that about 2,100 early New Yorkers have been interred on these grounds. Burials of note consist of Chief Engineer for the Erie Canal, Benjamin Wright; Stevens T. Mason, first governor of Michigan; and 1937 Whig mayor of NYC, Aaron Clark.
The second oldest non-sectarian burial place in Manhattan is just one block west, at 52-74 East 2nd Street, with the similarly named New York City Marble Cemetery. 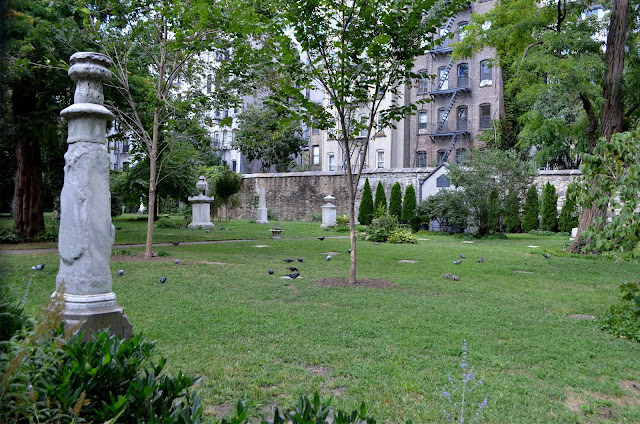 Establish as year after the New York Marble Cemetery, the graveyard holds 258 vaults made of Tuckahoe marble. 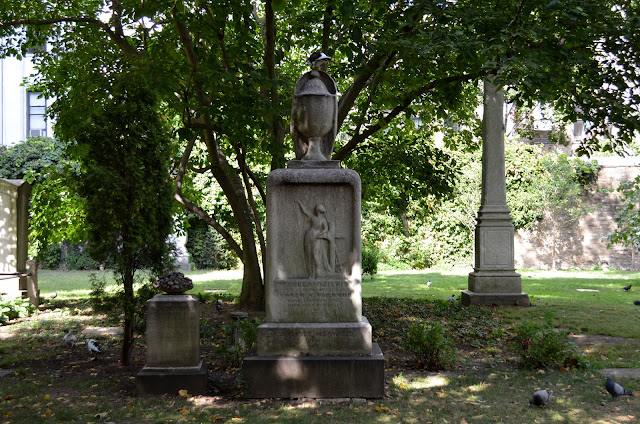 Designated a NYC landmark in 1969, notable burials include James Lenox (who helped form the New York Public Library) and Mayan archaeologist John Lloyd Stephens.
If you're still looking to walk about, there are another handful of curious features nearby, though outside the East Village.
In Little Italy, there is the marble plaque for Peter Caesar Alberti (who also has a marker in The Battery), out front of the Italian American Museum at 155 Mulberry St. 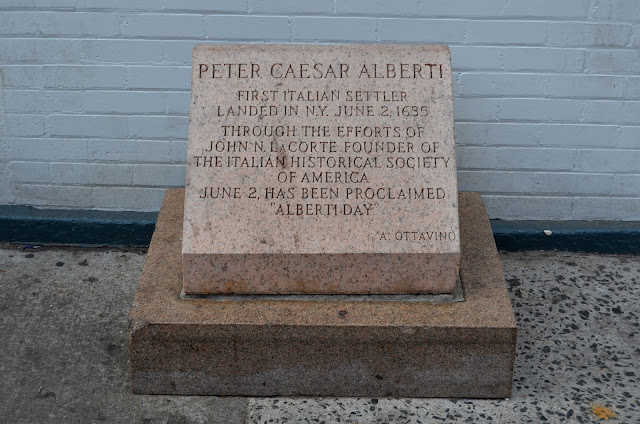 Alberti was a Venetian immigrant within the Dutch colony of New Amsterdam, and is seen by many as the first Italian settler in the area.
A few blocks northeast is the Mott Hardware Key at the entrance of 52 Kenmare Street. 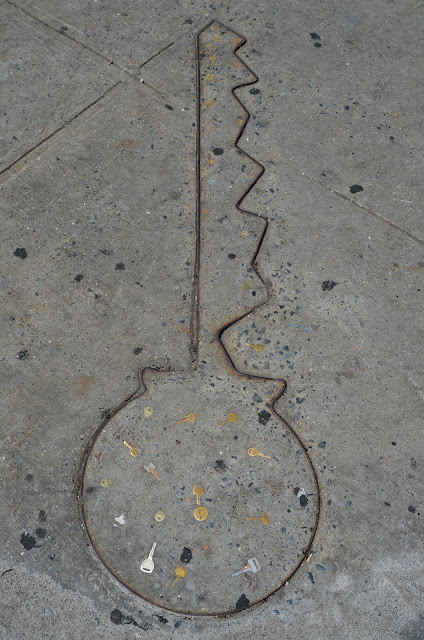 The owner of Mott Hardware told me he installed the large work of art in the early 80s, so it's been there for over thirty years now.
Lastly on this trip, one will head further east to Essex Street, just south of Delancey Street, where there is a plaque to commemorate the founding of the very first Jewish service organization, and quasi-Masonic lodge known as B'nai B'rith. 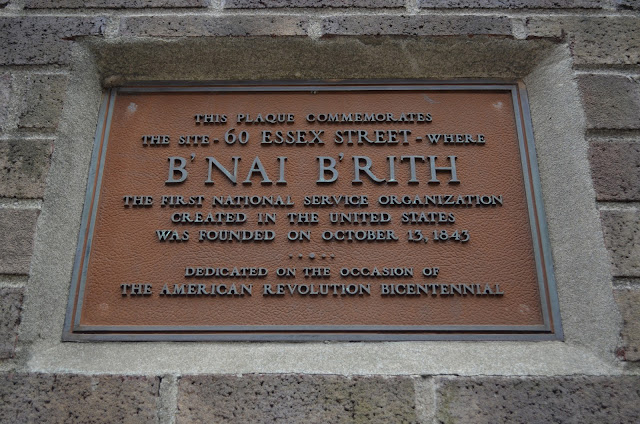 Led by Henry Jones, and eleven other German-Jewish immigrants, the group was founded at Aaron Sinsheimer's café (which used to be at 60 Essex Street) in October of 1843. Originally called Söhne des Bundes (translated: Sons of the Covenant), they formed to take on "the deplorable condition of Jews in this, our newly adopted country", according to fellow-founder Isaac Rosenbourg. Soon after forming, B'nai B'rith used its growing membership to gain political leverage, and were thanked with the curse of being forever listed by some conspiracy theorists as one of the many masks of the Illuminati.
I'm unaware of anything else one should really take notice of in the immediate stretch, but by all  means: if I missed anything, fill me in, as I'd love to take heed.
Posted by A156