The Toynbee Tiles of NYC

First some history for those not familiar with what a Toynbee Tile is.
Though no one really knows who created, or exactly why this strange form of street art exists, many believe the mystery has been solved by Justin Duerr, and his amazing documentary Ressurect Dead.
The story goes that, for over 30 years, one Philadelphia man has used linoleum tiles, and an asphalt compound, to spread his near-schizophrenic message of life-after-death, through a hole in the floor of his car. By placing the tiles onto the street to be constantly run over, the tiles would be pushed into the road to create an almost permanent display of his ideas.
Staring in Philadelphia in the early 1980s, and spreading throughout the Northeast in the 90s (as far south as Washington D.C., and as north as Boston, MA), a few have also been spotted in the Midwest (such as Missouri), and even one in South America - with New York having the largest collection outside of Pennsylvania.
The messages, though brief, are thought to originally stem from the book, Experiences, by British philosopher Arnold J. Toynbee, and mixed with some sci-fi from the 1968 movie 2001: A Space Odyssey, which was written by Stanley Kubrick and Arthur C. Clarke. Nevertheless, the information contained in the tiles has been known to change from time to time, and some even include stories of secret government attacks on the "artist".
It is now accepted that whoever placed the tiles thinks we can colonize the planet Jupiter with the souls of all human life that have died so far.
There is a wonderful interactive map of all the so-far-discovered pieces (link here), which I used to catalog those in New York City.
While there are many spread throughout Manhattan, like the one on the corner of Church and Warren Streets in Downtown... 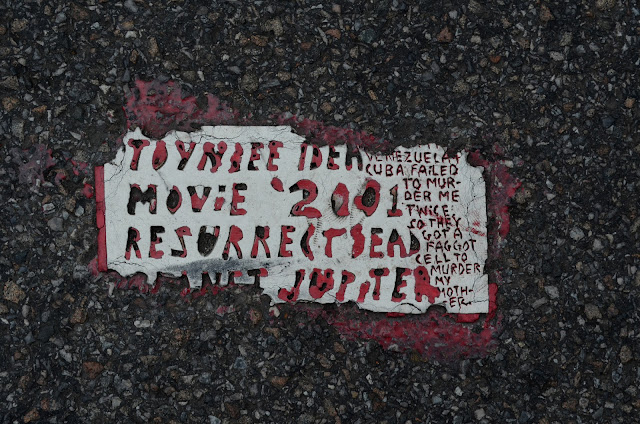 ...most can be found in the Midtown area.
By taking a walk south on Broadway, starting at 42nd Street, then a left on 35th, heading south again on 6th Avenue to 27th Street, and then north on 5th Avenue from 31st to 38th Street, one can find all those pictured below. 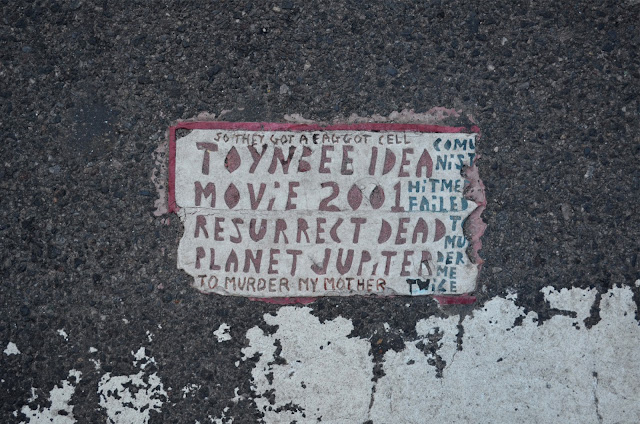 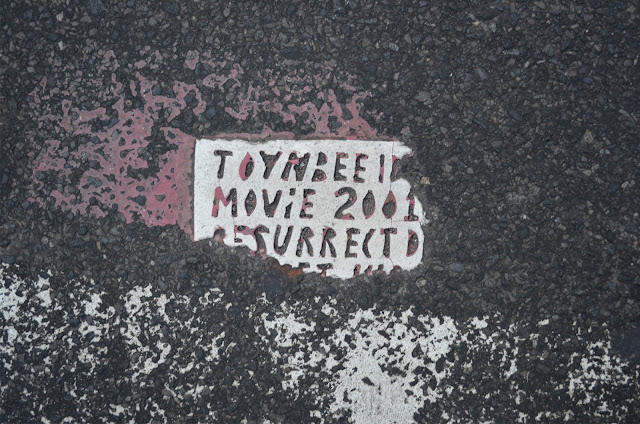 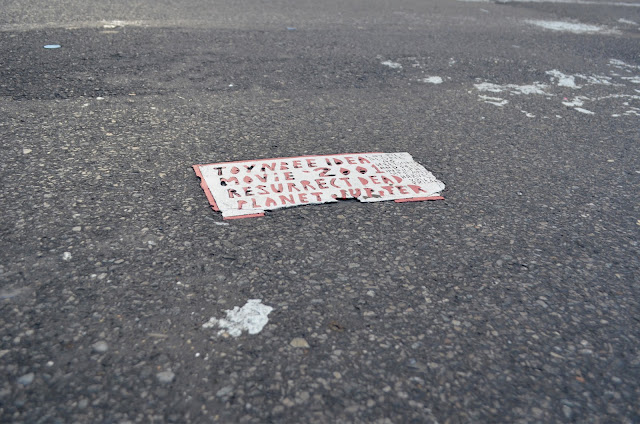 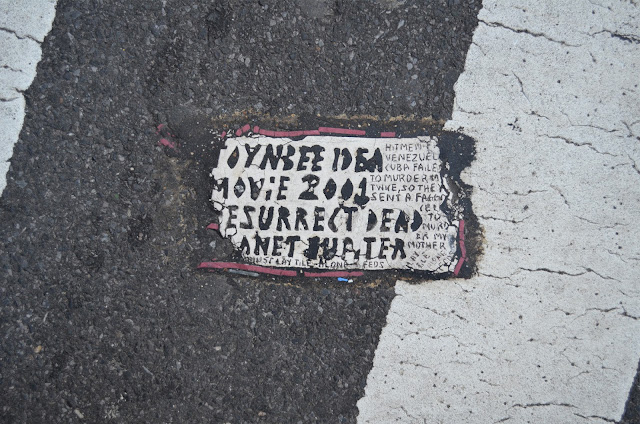 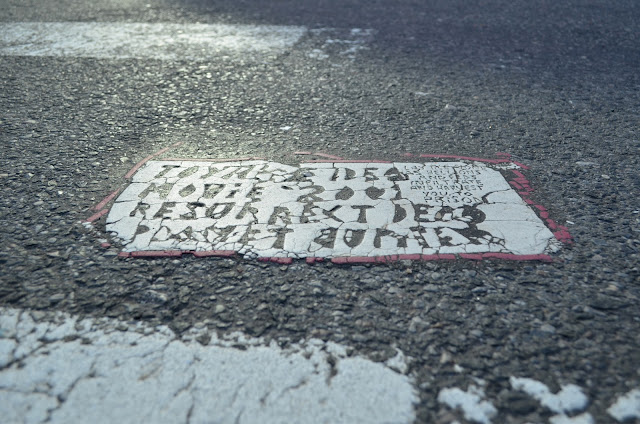 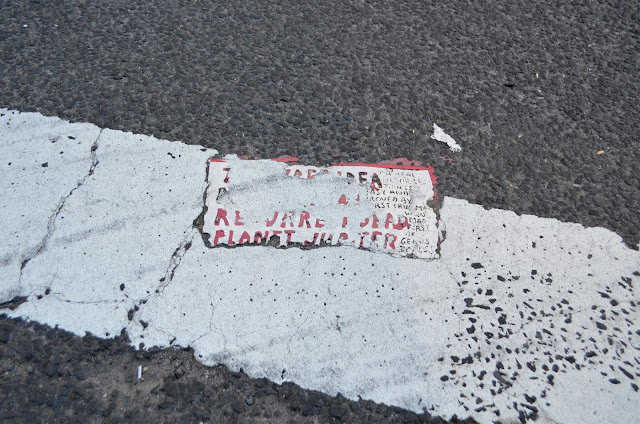 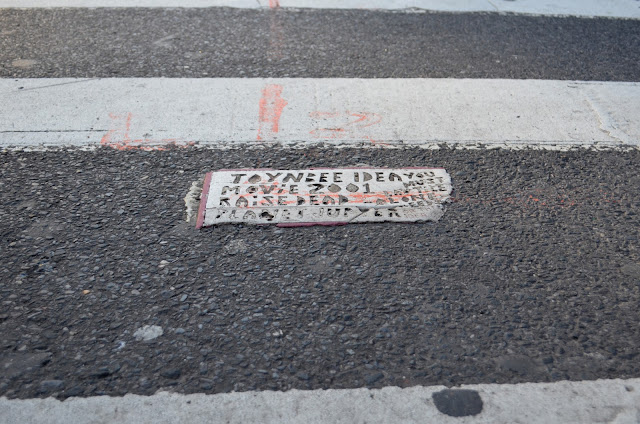 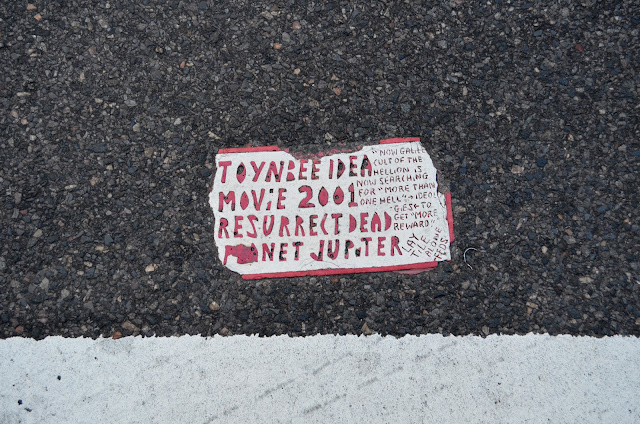 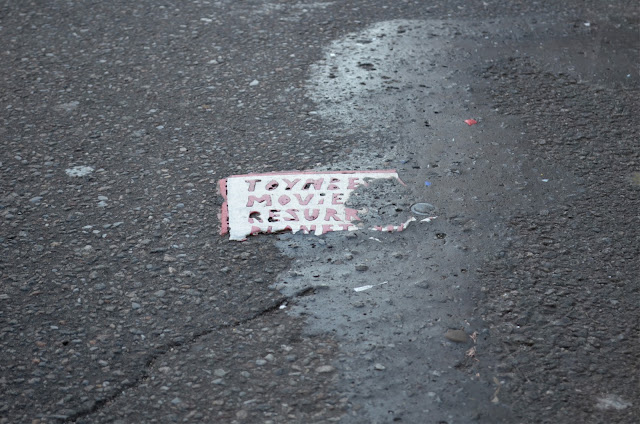 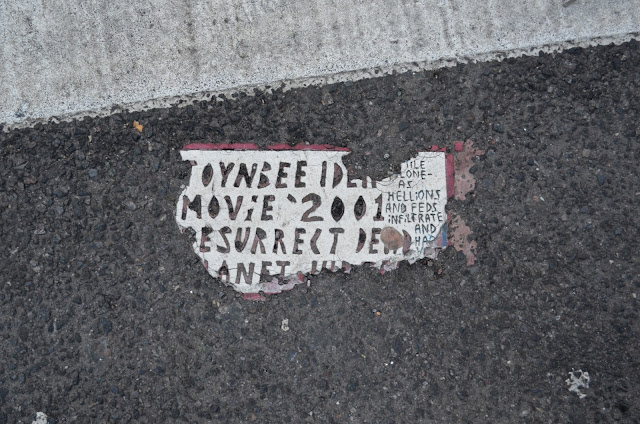 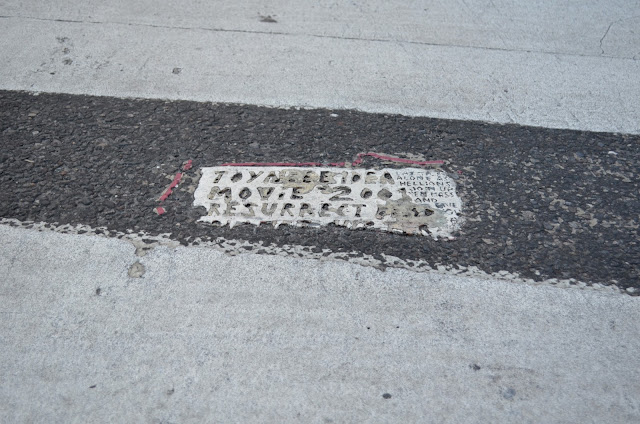 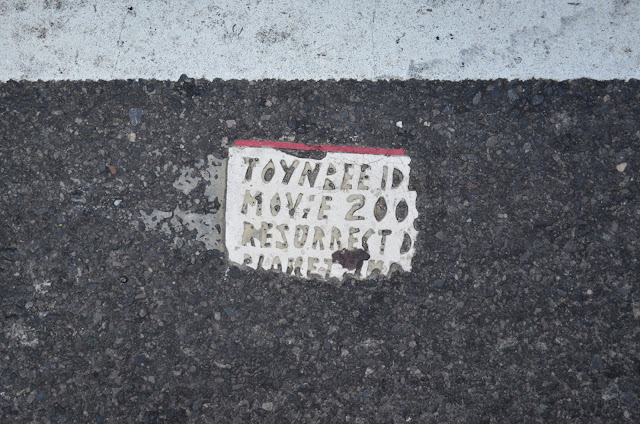 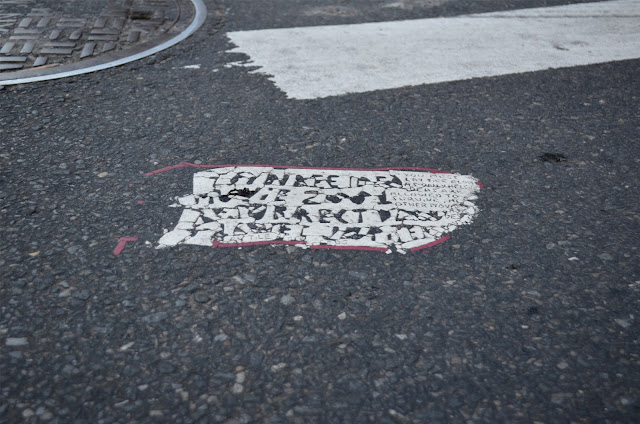 Try seeing how many you can spot along your way.
Since the tile work has garnered a bit of infamy, there are quite a few fakes, with varying degrees of competence in the original method. 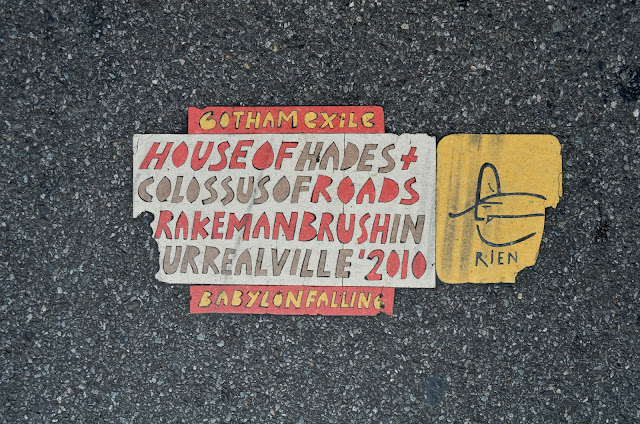 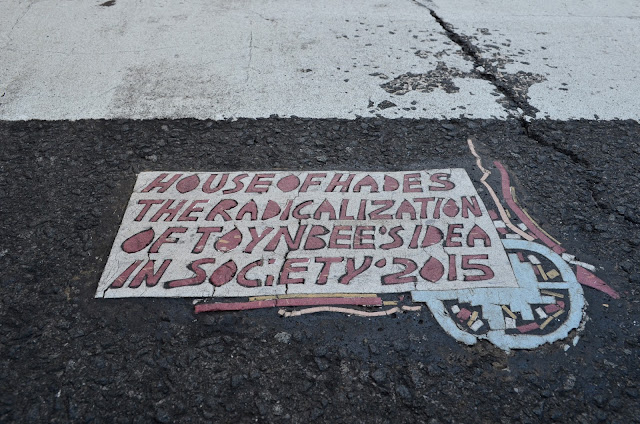 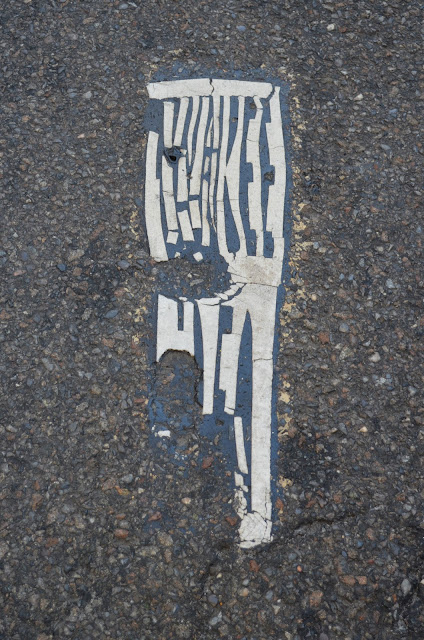 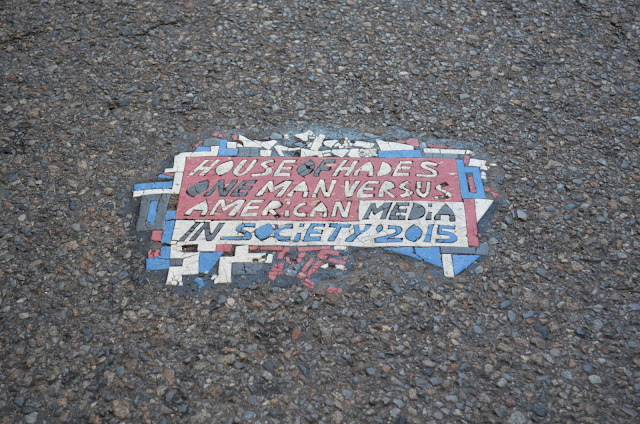 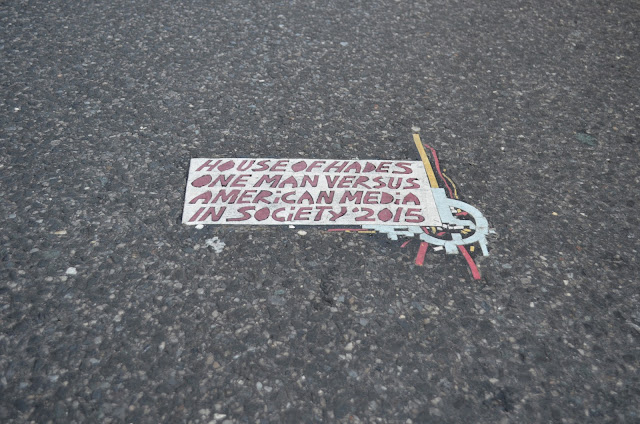 Happy hunting, and I look forward to someone turning this into some kind of scavenger hunt.
Posted by A156

Many are going to ask, "What's so weird about this one corner?" and I'm here to answer.
The end of Irving Avenue, where it meets Moffat Street, in Ridgewood, Queens, is the most radioactive spot in the entire state of New York, and would be the northeast's if not for NJ's McGuire Air Force Base in Burlington County (called "the most contaminated base" in 2007 by the United States Environmental Protection Agency). 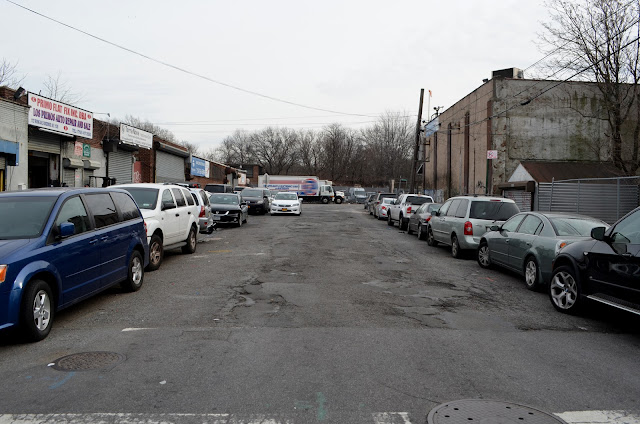 In 1918, chemical engineer Alcan Hirsch, and his brother, mining chief Marx Hirsch, opened a chemical plant where today sits most of the businesses on Irving Ave's north side. In 1920, they christen it Hirsch Laboratories, and later added the mining company Molybdenum Corporation (aka Molycorp). The Hirsch brothers sold the lab in 1923 to Harry Wolff and Max Alport, who renamed it Wolff-Alport Chemical Company, but continued their mining operations, and supplied W-A Chemical with the rare-earth metals needed to produce a huge list of products.
The plant processed Monazite sand, which, when treated with Sulfuric Acid, separates into the rare-earth Sodium Sulfate, but also the radioactive waste known as Thorium Pyrophosphate.
It wasn't till the United States’ nuclear weapons program in 1942, known as the Manhattan Project, that Thorium became useful. Until 1947, when the Atomic Energy Commission began to purchase the fertile heavy element from Wolff-Alport, and for the full 20-years prior, the Thorium waste was simply dumped into the area's sewers.
In 1974, the Department of Energy created the FUSRAP initiative, which stands for "Formerly Utilized Sites Remedial Action Program", in an attempt to clean up environmental contamination, but it wasn't until 1987 that they notified New York City officials about the dangerous pollutants that stemmed from the Wolff-Alport plant. From 1988 to 2006, tests claimed the levels of radiation in the area were below regulatory limits, but broader tests in 2010 proved this was untrue. 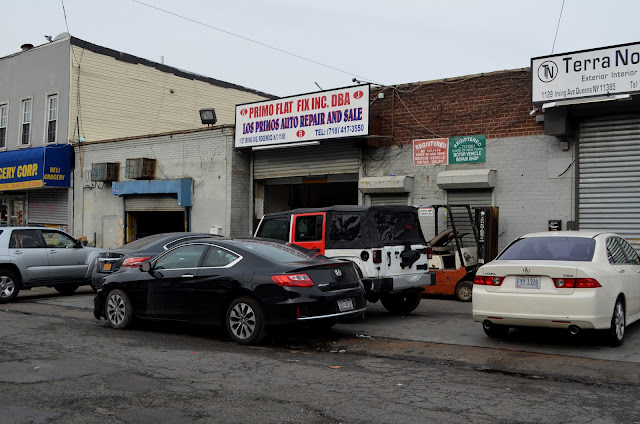 The land where the chemical depot once stood is now Los Primos Auto Repair and Sale (1127 Irving Ave), and - if you ask nicely - the owner may show you the arches where the kilns once scorched apart the Monazite sand.
While a single X-ray may subject someone to 10 millirem of radiation, a worker at Los Primos is exposed to about 300 millirem per year (100 per year is deemed the highest "safe" dose).
It is said the site is not a danger to those who visit once or twice, but it's so bad within the auto-body shop, the Environmental Protection Agency has asked that no employee rest on their back within the premises, even though a sandwich of 2 inches (5 cm) of steel, 2 inches of lead, and another 2 inches of steel has been laid down under almost the entire block, by the E.P.A., to prevent further spoliation from gamma radiation.
Posted by A156