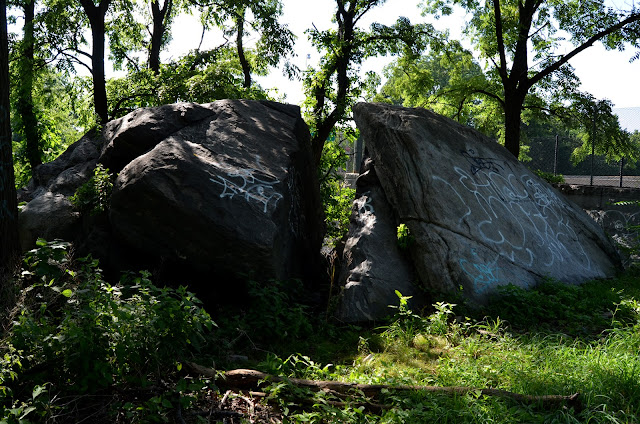 There are two ways to visit: one legal, the other, not so much.
One can use the pedestrian trail that begins on Eastchester Place - crossing under I-95, following the trail beside the northbound lanes of 95, and then rising to share the overpass (crossing over the Hutchinson River Parkway), and ending at the boulder.
The other way is a little more exciting, and - even though you can see a lot of local wildlife - is discouraged. 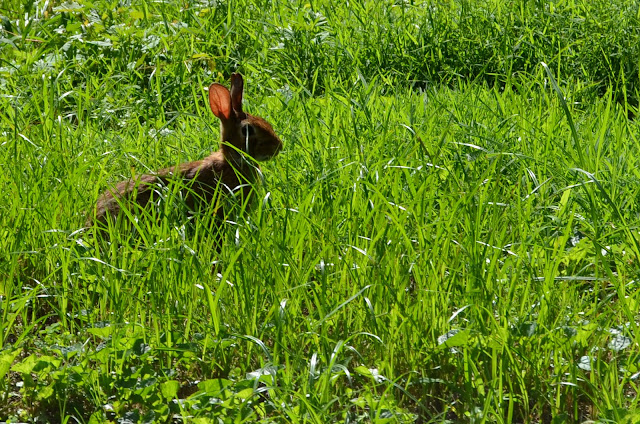 Parking at Split Rock Golf Course, you head to the west end of the course (under the railroad overpass), and follow the horse bridle trail northward. About 1 mile in (1.6 km), you will notice the northward fence of the golf range meets a westward fence. That chain-linked fence corner points to Split Rock, but you’ll have to illegally cross the entrance ramp to I-95 to get there. 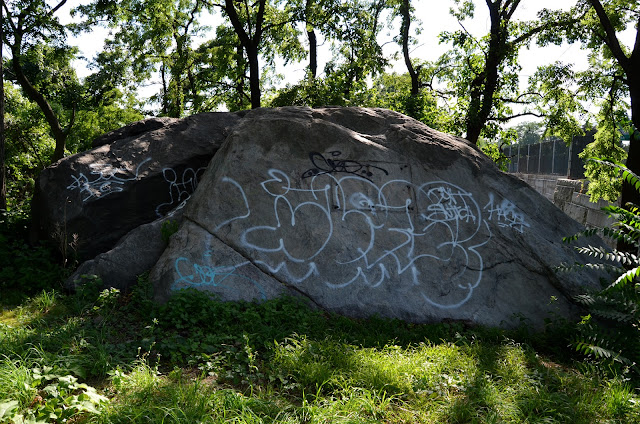 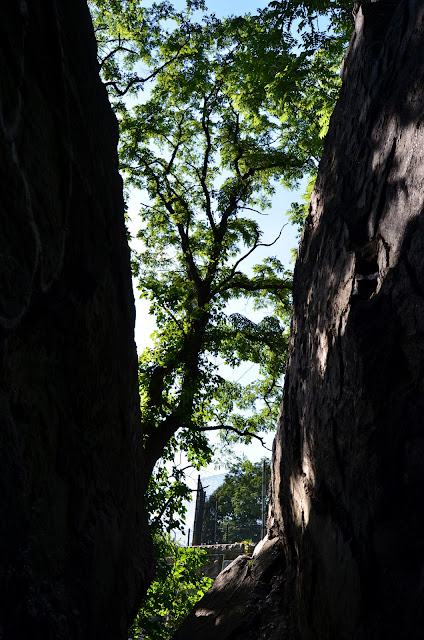 A bronze plaque, which is now gone, was placed there in 1911, reading:


ANNE HUTCHINSON
Banished from the Massachusetts Bay Colony in 1638, because of her Devotion to Religious Liberty. This Courageous Woman sought Freedom from persecution in New Netherland. Near this Rock in 1643 She and her Household were Massacred by Indians. This Tablet is placed here by the Colonial Dames of the State of New York.
ANNO DOMINI MCMXI Virtutes Majorurn Filiae Conservant 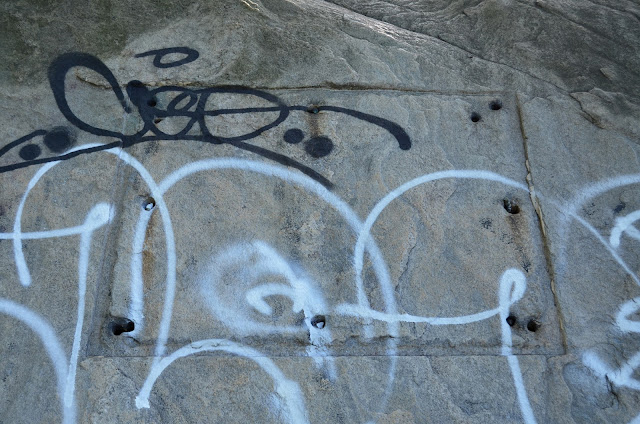 Though the plaque has been removed due to vandalism, the rock, pushed there thousands of years ago, will probably stay there, split as it is, forever - dual and eternal - like Anne’s legacy. 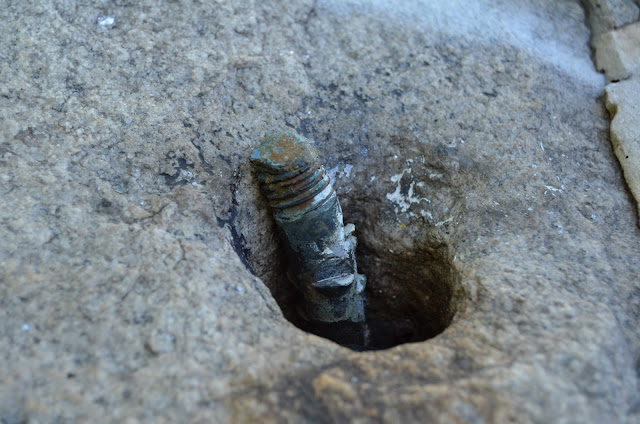 If you’ve headed there by car, and are still in the mood to see large rocks, check out Glover’s Rock on Orchard Beach Road, just before it meets Park Drive. 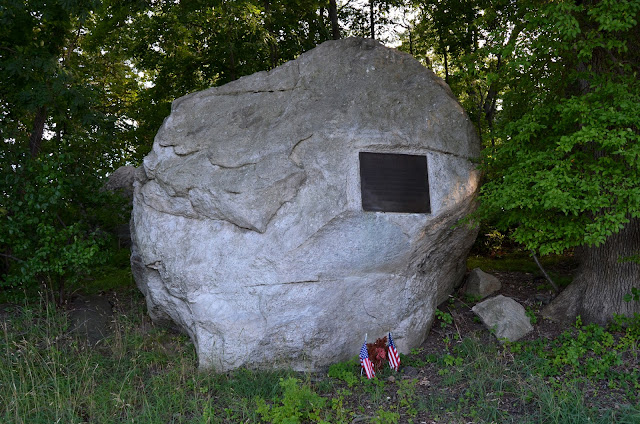 A rare white-granite glacial boulder, it is the spot where, during the American Revolutionary War Battle of Pell's Point, Colonel John Glover reputedly stood to watch the British forces. On October 18, 1776, he and 600 patriots held off advancing troops, so General George Washington could regroup, and lead his troops to victory.
Posted by A156

Unlike Bryant Park, or Washington Square Park, the locals have always used the lot known as Tompkins Square as a public meeting place. It was previously just a small section of Stuyvesant Meadows' salt marsh, until 1829 when it was accepted by Manhattan as a gift from Peter Gerard Stuyvesant (1778 - 1847) for a tax break, with the agreement that the land would always be used as a park open to all.
Tompkins Square (named after U.S. Vice President under President James Monroe, Daniel D. Tompkins [1774–1825]) was established in 1834, and its cast-iron fence was added the following year. Thought to be set in an ideal part of the city that would boom, the Panic of 1837 brought the city's expansion to an end, and the area was considered a haven for immigrant communities by some, and a slum by others. 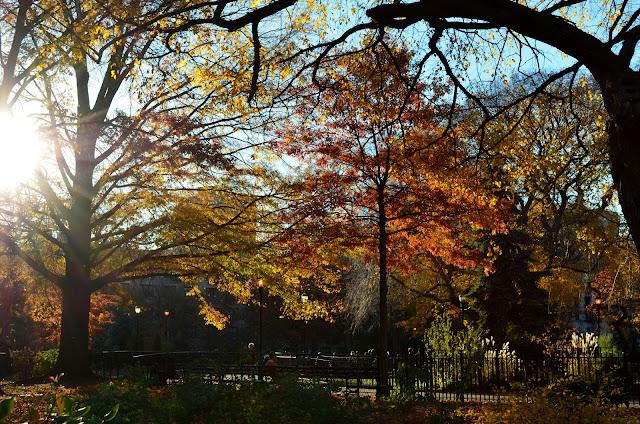 The public square was later deemed a park, reopened in 1850, and it soon became the local meeting ground for those unhappy with the trappings of the Industrial Age.
In 1857, police attacked the locals in the park protesting unemployment and food shortages. In July of 1863, laws passed by Congress to draft men into the ongoing American Civil War, sparked the Draft Riots within the park. In January, 1874, the Tompkins Square Riot occurred, then, in 1877, 5,000 people fought the National Guard as they attempted to listen to Communist speeches.
In short, the area is a historical hotbed for political activism, but it also holds some interesting curiosities you might want to see, besides the crust punks, and chess wizards.
While the park contains a handful of monuments, the one with the most tragic background would have to be the tribute to the General Slocum boating disaster of 1904. 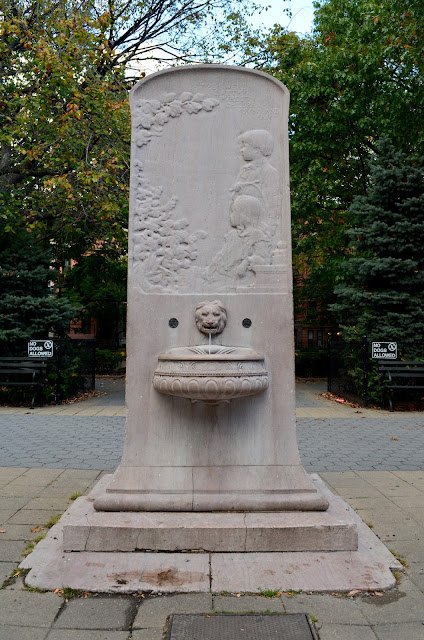 A few locals, and even some visitors, have asked, "If there is a Little You-Name-It, why no Little Germany?" There was, Kleindeutschland, until June of 1904, when 1342 of Little Germany's residents (including the entire congregation of St. Mark's Evangelical Lutheran Church) were crossing the east river to an annual picnic. The steamship they were on, the PS General Slocum, caught fire, and sank off North Brother Island, near the Bronx shore, killing 1021.
While there is a monument of statues over the mass grave of the victims, the Sympathy Society of German Ladies asked to also set one up in the neighborhood that lost so many of its citizens. The pink Tennessee marble stele was erected in the north side of the park in 1906.
On a lighter note, Tompkins Square Park's Dog Run was the first in New York City, and many think in the country. Opening in 1990, it has been a place for tourists, and locals alike, to take a moment and smile.
Sometime in the mid-90s, a tree in the center of the run fell over, and a local chainsaw artist created a bone-shaped plaque, which many began to add the dog tags of little ones who had passed. The original "bone memorial" had weathered into bits, but a new, double-sided one replaced it during park renovations in 2008. You can still add your pet's old tags, or - as most do now - purchase memorial plates. 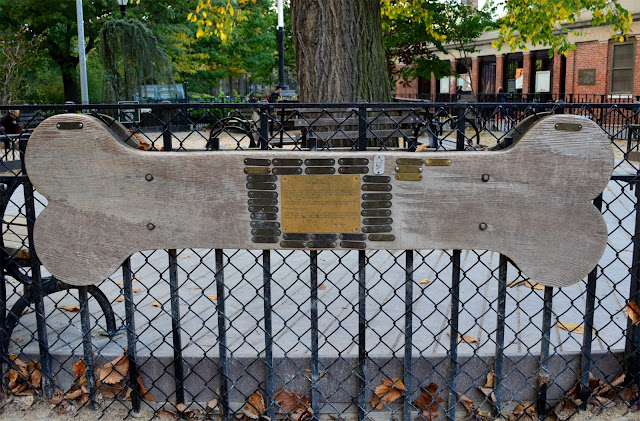 Be sure to drop by in October, as the park holds the Annual Tompkins Square Halloween Dog Parade, known as the biggest dog Halloween party in the U.S., with an attendance of over 400 dogs in costume.
Lastly, there are many awesome trees in Tompkins Square, but none are as "blessed" as the American Elm (Ulmus americana) in the near center of the park. 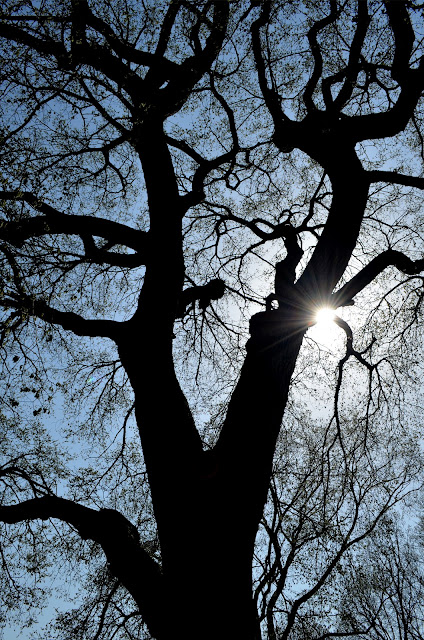 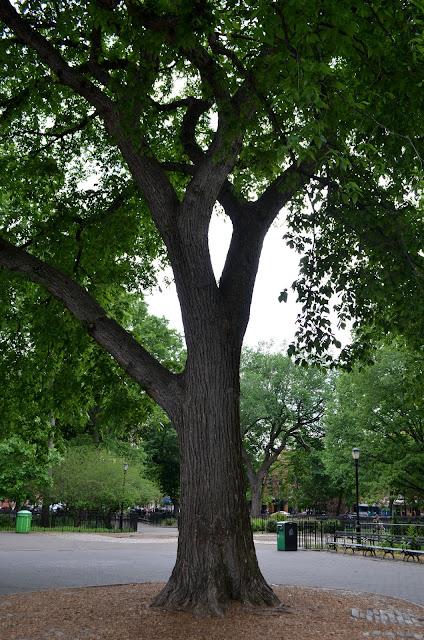 Known as "the Hare Krishna Tree", it is at the base of its trunk, where, on October 9, 1966, A.C. Bhaktivedanta Swami Prabhupada (1896 - 1977), founded the International Society for Krishna Consciousness, with the first chanting session of the Hare Krishna mantra outside of India (creepy pedophile, but great Beat poet Allen Ginsberg was present to document the event).
If you enjoy just walking around and looking up in trees, you'll be in for a treat, as the park has a small population of red-tailed hawks (last numbered at two juveniles, and an adult male). 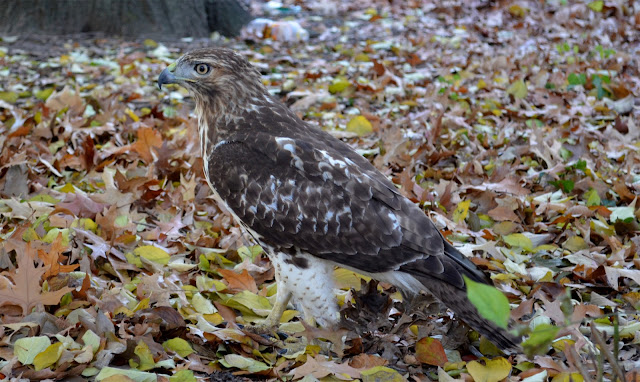 Please don't disturb or taunt the birds if you see them, as they are already so used to humans, they will often swoop right by park-goers to catch a mouse nearby. 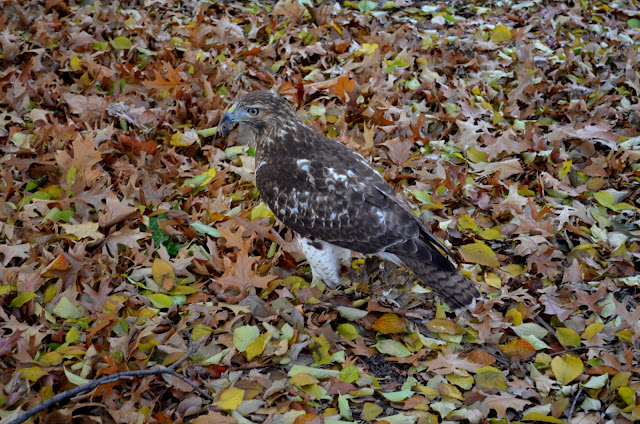 If you aren't in the area for the October dog fun, the spring and summer here are also wild times, as there are punk, and art, shows within the park, such as this past weekend's 27th Annual Tompkins Square Park Riot Punk Show. Two days of punk bands shouting bad words at the Boys In Blue for their 1988 trespass against the park's homeless. 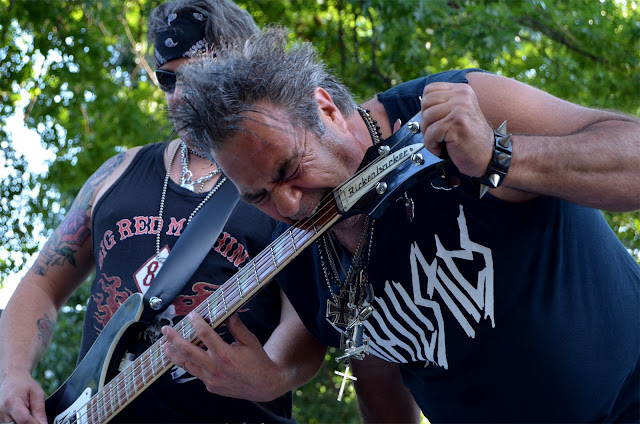 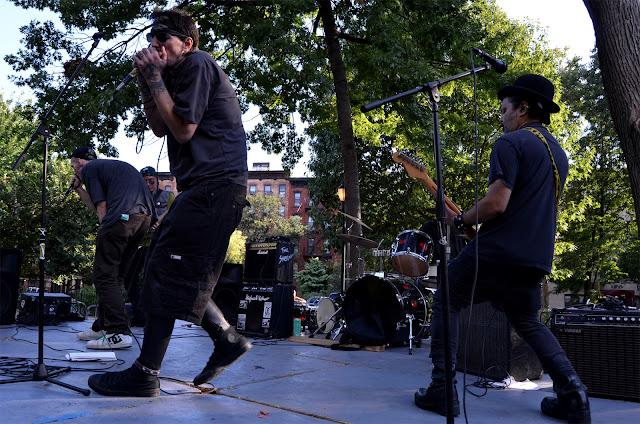 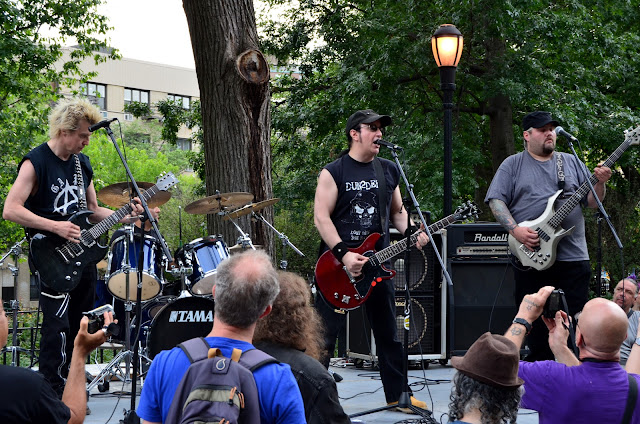 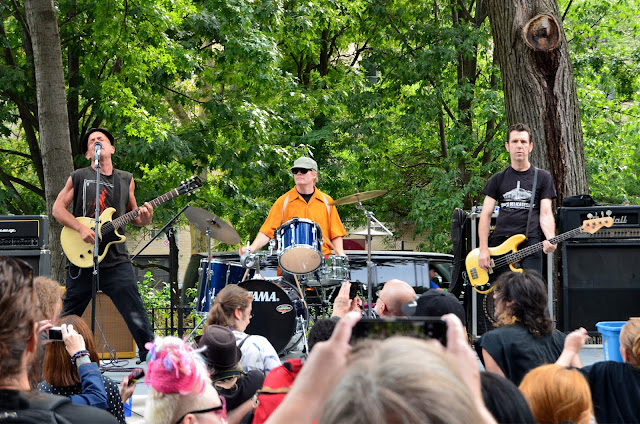 If you can't find the secret spot in the park where Daniel Rakowitz once set up a food stand in 1989, and fed the homeless the remains of poor Monika Beerle, but are still up for hanging around the area to find more weirdness, take a walk west down St. Marks Place.
You'll come across 96 - 98 St Marks Place, which are the two tenement buildings used by Peter Corriston for the cover of Led Zeppelin's 1975 LP, Physical Graffiti. 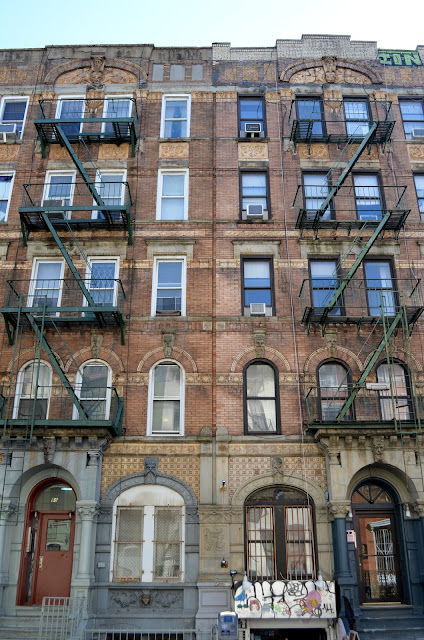 Further down the street is a speakeasy-turned-theater, Theater 80, at 80 St Marks Place.
Opening in 1960, owner Howard Otway refurbished the house and hall in 1971, and had Hollywood stars come out to the opening party, so they could leave their prints in the cement just outside.
Some of the originals on the sidewalk include Joan Crawford, Kitty Carlisle, and Gloria Swanson, with the addition of Dom DeLuise in 1983... 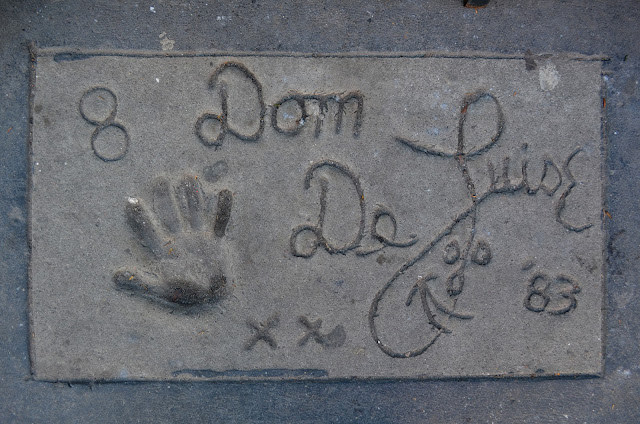 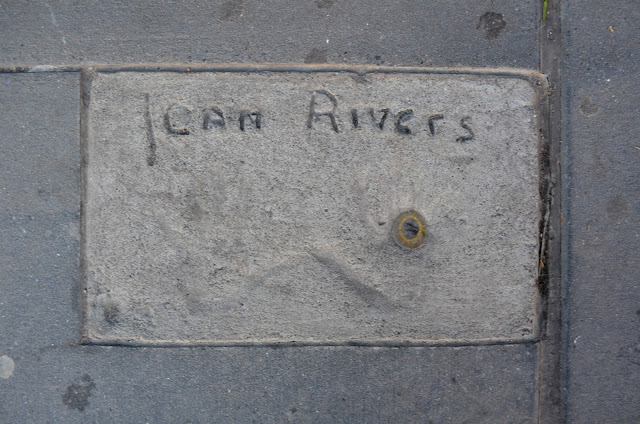