The oldest city hall in the United States stands in Manhattan's Civic Center district, between Broadway, Chambers Street, and Park Way. While it is the nations longest continuously-operating government building, it is actually the city's third city hall. 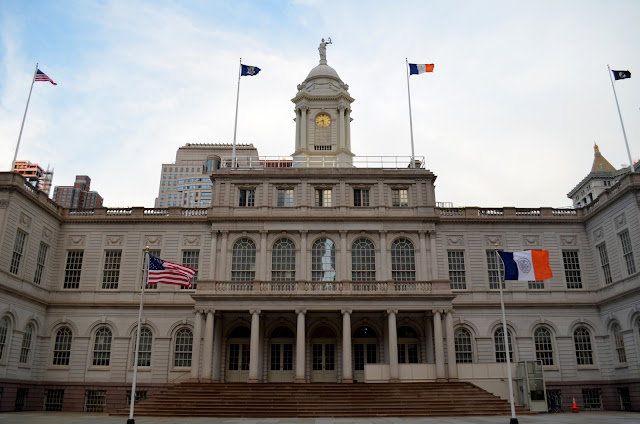 The architects who won the 1802 design competition, are a true testament to New York City's multiculturalism: U.S. architect John McComb, Jr., and freed slave Joseph-François Mangin (some accounts say he was born in Haiti, others France). Mangin, who designed St. Patrick's Old Cathedral on Mulberry Street, and McComb, who designed Castle Clinton, were jointly awarded a prize of $350.
Under construction from 1803 to 1812 (delayed due to City Council's objection that the design was excessive), it was built in a Federalist style, emulating much of what was being built in Paris at that time.
New York City Hall is listed as a National Historic Landmark, and is on the National Register of Historic Places, with landmark designation in 1966 for its exterior, and again in 1976 for the interior.
Before ascending the steps to enter, there is a large plaque on the ground, which commemorates the first excavations for the city's subway system. 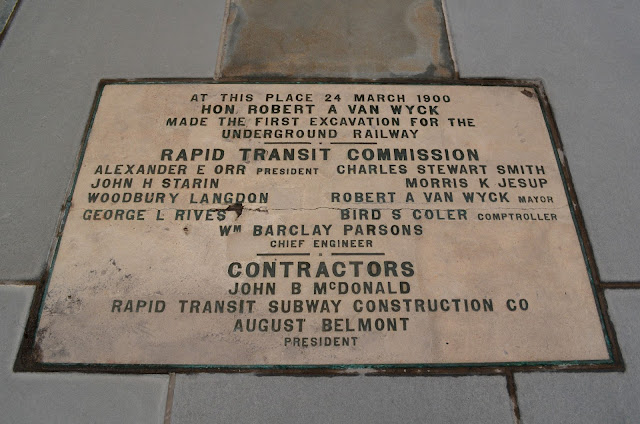 After entering, one will notice the amazing American-Georgian interior design of marble, sandstone, limestone, and painted wood... 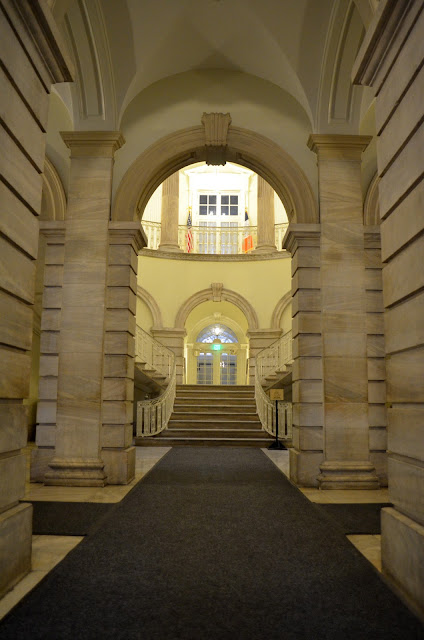 ...which leads to one of the United States' largest floating marble stairways. 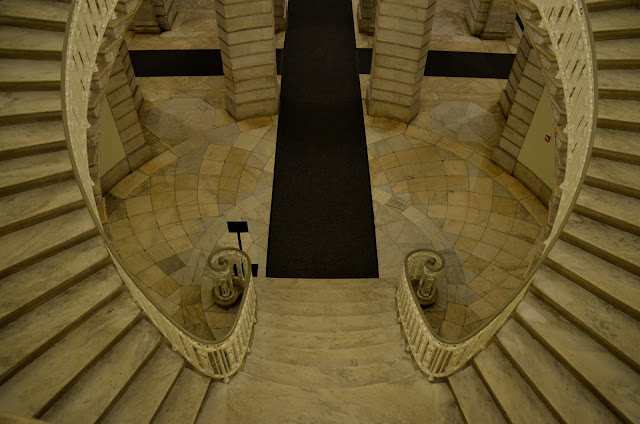 Before heading up the stairs to the second floor, take a look up to see the rotunda's dome. 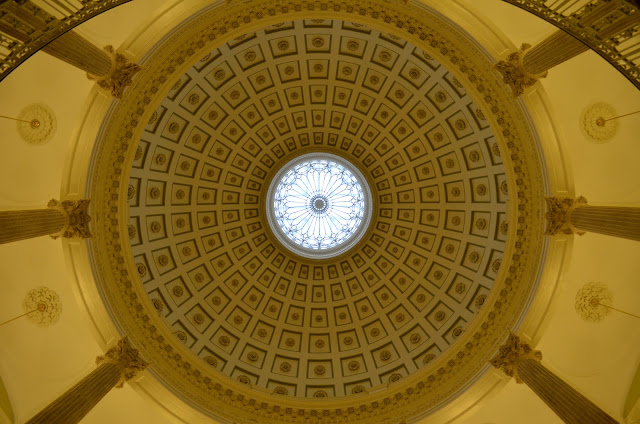 Sadly, it is the second dome, as the first burned down during a 1858 firework show for the celebration of the laying of the Transatlantic cable. The copper statue of Justice, atop the outside of the dome, is also a replica of the first that came crashing down with the dome, and, strangely, is one of the few in the U.S. to not be blindfolded.
Most rooms within the Hall are not locked, except for one, the Governor's Room, which is normally opened only for tours, or special guests. 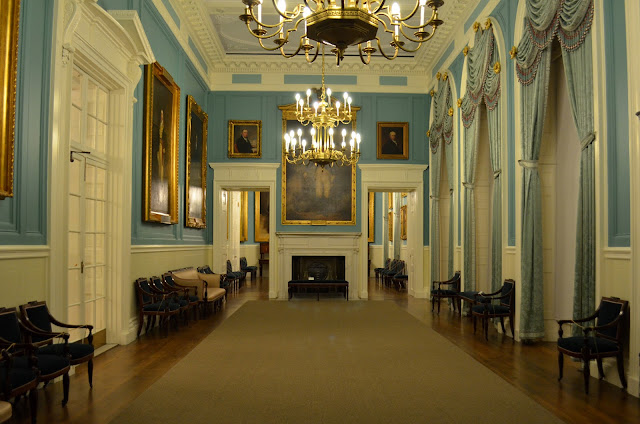 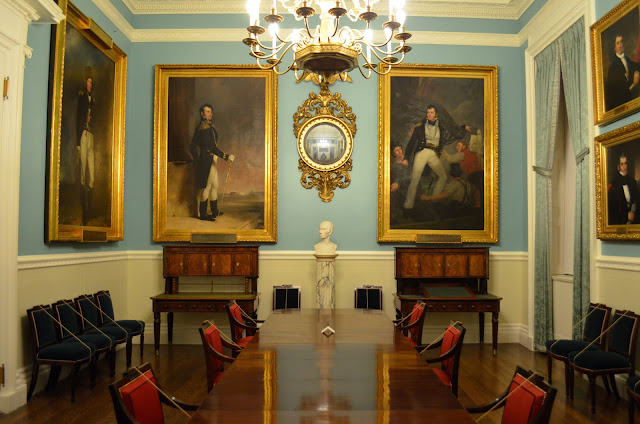 The room holds a large portion of the of the building's oil portrait collection (which is estimated to be worth a total of $100 million), as well as George Washington's desk (seen below at the center of the room). 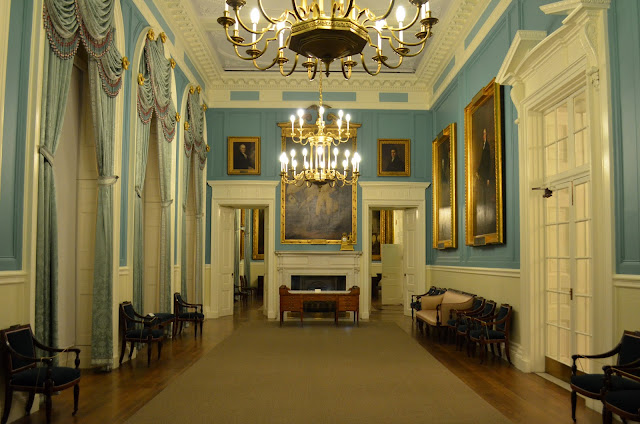 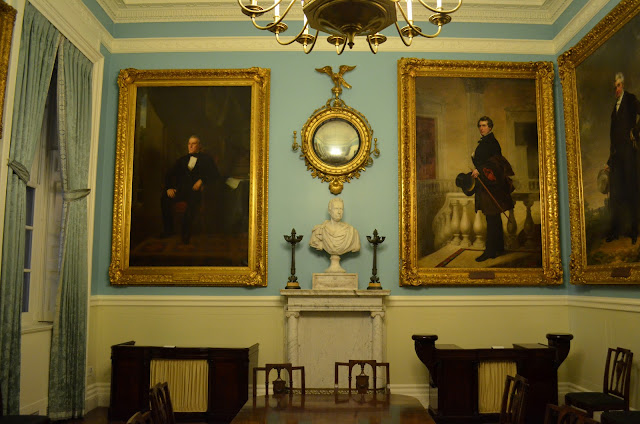 Also, if one feels politically motivated, you may take part in Council meetings in the Hall's Council Chambers. 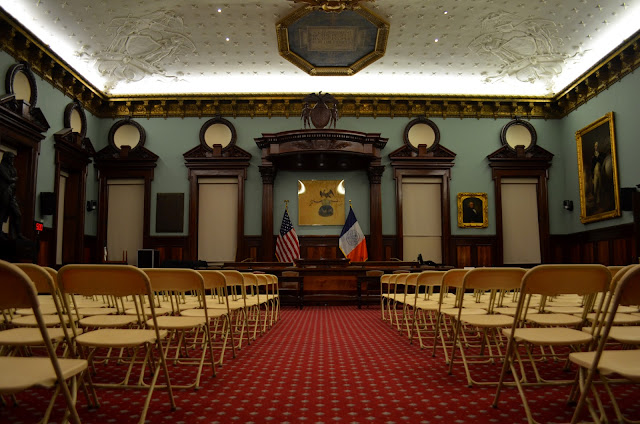 One may attend Committee, and Stated Meetings to voice your opinion on public matters, which are held twice a month, and are a proud distinction to our admirable democracy. A full listing of public meetings is available at this link.
On a morbid side note, this room's balcony was also the scene of a murder. 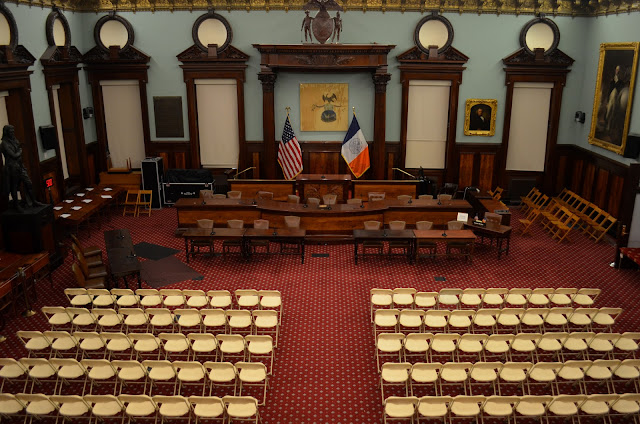 While New York City Hall briefly held the bodies of Abraham Lincoln, as well as Ulysses S. Grant, and Colonel Elmer Ephraim Ellsworth (the first Union officer killed in the Civil War), the first to lay in state, due to political assassination within the grounds, was Brooklyn Councilman James E. Davis. In 2003, Othniel B. Askew shot and killed Davis on the balcony of the Council Chamber. A plainclothes policeman, Richard Burt, then shot Askew from the ground floor, hitting him five times, and he later died at Beekman Downtown Hospital.
Anyhow, whether you visit to let your civic voice be heard, or just to see a piece if this city's history, I highly recommend it, and there are groups (such as New York Adventure Club - link here), that hold after-hours tours of the building.
Posted by A156

One of the older cemeteries in New York City sits in a crowded section of Woodside, Queens.
The Moore-Jackson Cemetery was first established a little before 1733 on the farmland of Samuel Moore. Samuel was the son of the first reverend of Newtown, Long Island, John Moore, whose family settled the area in 1652. It is thought that Newtown Pippen apples originated from this farm.
While the cemetery's address is "officially" between 31-30 to 31-36 on 54th Street (as the grave markers are visible from there), the entrance is on 51st Street.
One can walk through the graveyard, to view - up close - some of the memorials, such as the well-preserved tombstone of  Augustine Moore... 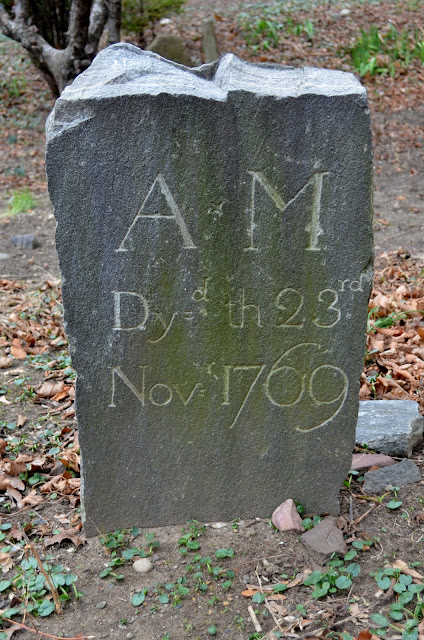 ...as well as other headstones that haven't stood the test of time very well. 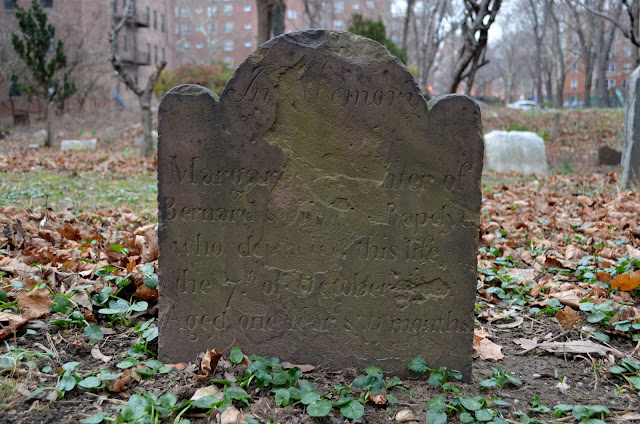 The vacant farmhouse was dismantled in 1901, and during excavations in 1919, it was discovered that the grave site held a total of 42 burials, with surnames including: Jackson, Hallet, Rapelye, Fish, Berrian, and Mecke.
The Works Progress Administration reburied the remains, along with arranging the remaining gravestones in 1936. The area was finally acknowledged as a New York City landmark in 1997, and is now managed by the Queens Historical Society.
If you are still looking for something somewhat nearby, check out Athens Square Park, which is on 30th Avenue, between 29th and 30th Street. The 30-minute walk will certainly let one take in the breadth and compass of Queens.
Named for the modern capitol of Greece, due to the sizable Greek-American population in Astoria, the park first opened as a simple playground in 1967, after it was acquired as public land in 1963. Reconstruction began in 1990, thanks to a one-million dollar restoration project; adding a central court, an small amphitheater, recreational space, plus seating areas along the perimeter, and sculptures throughout the park. In 1993, the first of many bronze statues was unveiled (of philosopher Socrates, and designed by artist Anthony Frudakis). Many of the following icons were donated by mayors of Athens, as well as other cities throughout Greece. 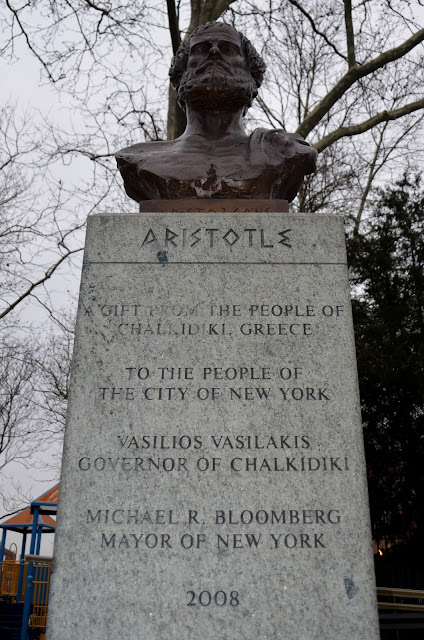 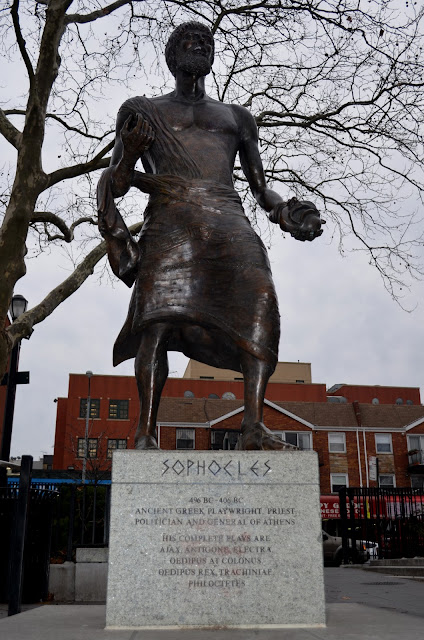 In 1996, three fluted Doric columns of granite, as well as a curved entablature atop, were built to echo the Tholos of Athena Pronaia in Delphi.
Every summer, the park holds a number of Hellenic-themed festivals, not to mention concerts of Greek music, old and new.
Posted by A156