As I mentioned in Part One, I'm breaking down This Hidden City's visit to the West Village into two circled walks, with this post as the second circular walk, this time on the east side of the West Village.
With this entry, I'll begin at the northeast corner of W. Houston Street and LaGuardia Place, where there is a large lot (25' x 40' / 7.6 x 12m), which was turned into, what artist Alan Sonfist calls, "land artwork". Titled Time Landscape, the garden plot consists only of plants which are native to the island, and is meant to give New Yorkers a view of what the area looked like before the Colonists' arrival. 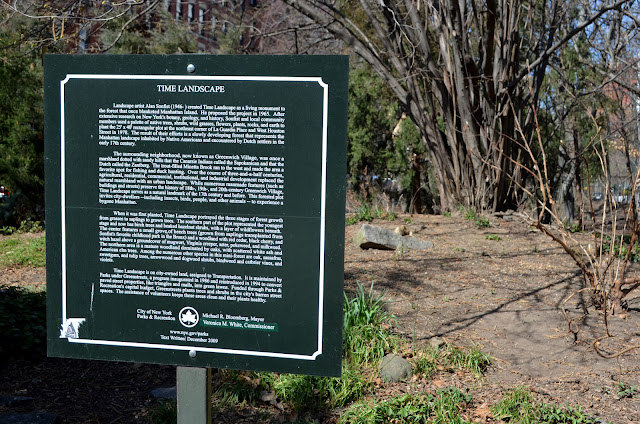 First proposed in 1968 by Sonfist, with the essay "Natural Phenomena as Public Monuments", the project was publicly unveiled in 1978. As you walk north along LaGuardia Pl, you can spot birch trees, beaked hazelnut shrubs, red cedar, black cherry, witch hazel, mugwort, Virginia creeper, aster, pokeweed, milkweed, oak trees, white ash, American elm trees, sassafras, sweetgum, tulip trees, arrowwood, dogwood shrubs, bindweed, catbrier vines, and violets - all planted by the artist.
When you approach Bleecker Street, begin walking westward, and you will come to the corner where Bleecker crosses 6th Street, Downing Street, and Minetta Street. Turn right on Minetta St to experience the complete opposite of Time Landscape, as this street runs over what once was Minetta Creek, a stream that was one of the largest natural waterways in Manhattan, only to be covered up. 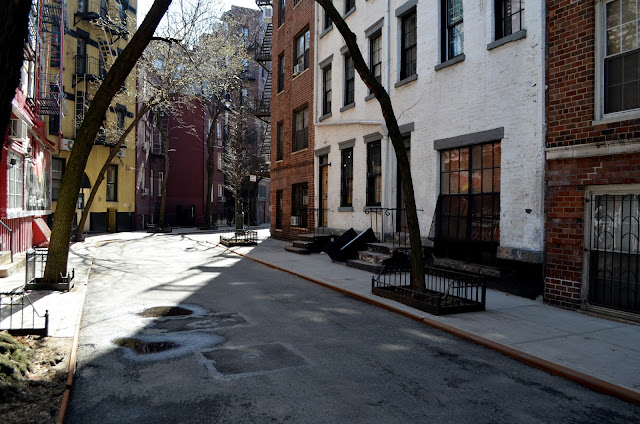 The name is derived from what the local Native American's called it, Manette, which translates as "devil's water". Some say the creek still runs under the streets of Manhattan, while others claim the construction completely stopped its flow.
At the end of Minetta Street, make a right, and you'll almost immediately find yourself in front of one of the most happening spots in Beat and Hippie history: Cafe Wha?. 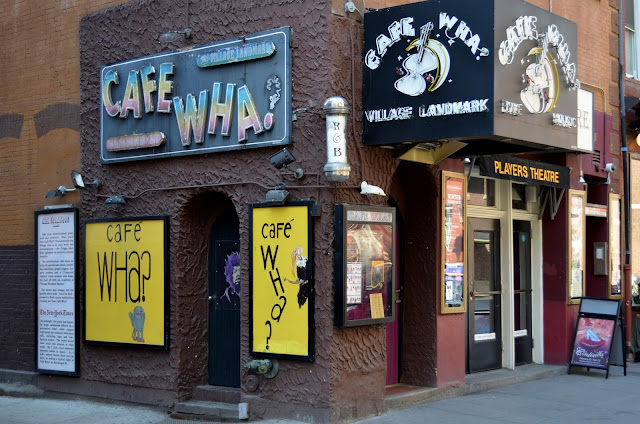 Opening in 1959, and closing sometime in the mid-60s, the joint was bought by club manager, and uncle to David Lee Roth, Manny Roth. It became a popular hangout for comedians, musicians and hipsters, such as Bob Dylan, Jimi Hendrix, Bruce Springsteen, The Velvet Underground, Woody Allen, Lenny Bruce, Bill Cosby, and Richard Pryor.
Roth sold the place in 1968 to Menachem Dworman, who ran it as Cafe Feenjon, changing the style from Beat poetry, and rock-n-roll, to falafels, and Middle Eastern music, until 1987, when Dworman's son Noam changed it back to its original name, and brought back the rock.
Head back to Bleecker St, and walk east to Wooster Street, where you'll find the Silver Towers Complex. Within their courtyard stands a huge (67 ton), two-sided, concrete sculpture of Picasso's 1954 "Bust of Sylvette" (originally inspired by beautiful 19-year-old Sylvette David). 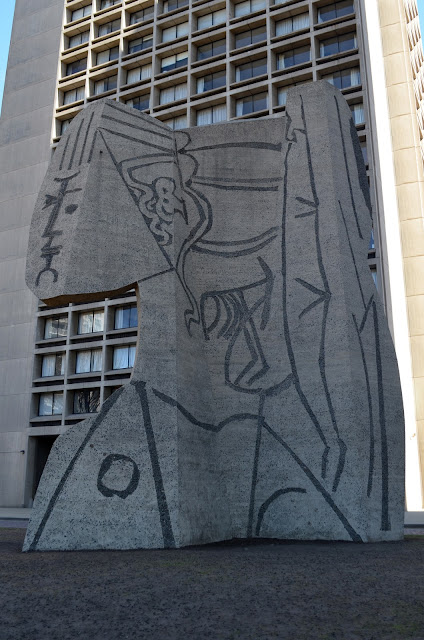 While many think this 1968 installation is by Picasso himself, the truth is he didn't have much to do with it. It turns out that Picasso doesn't have any outdoor sculpture in the U.S., besides his 50' (15m) / 140 ton piece in Chicago. The work is actually by Norwegian sculptor Carl Nesjar, who only asked Picasso (by mail) if he could recreate it. 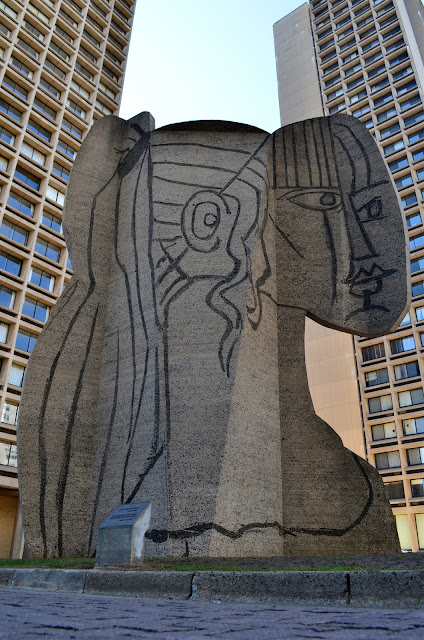 The most Picasso has to do with this work is that he created the small, metal original, and replied with a "yes" to Nesjar. Sadly, the plaque almost hides this fact, by placing Picasso's name larger than Nesjar's. 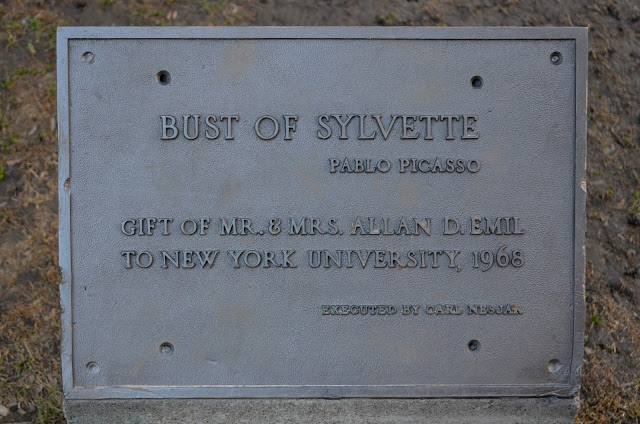 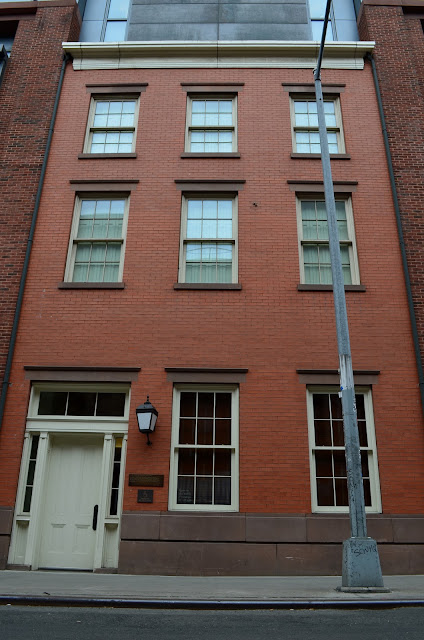 Why did I write "phony"? Because this isn't his home, nor ever was.
Poe lived in the immediate area, but his house was demolished by NYU to make room for Furman Hall. Only the facade was somewhat preserved, as well as moved a block away to where it is now. 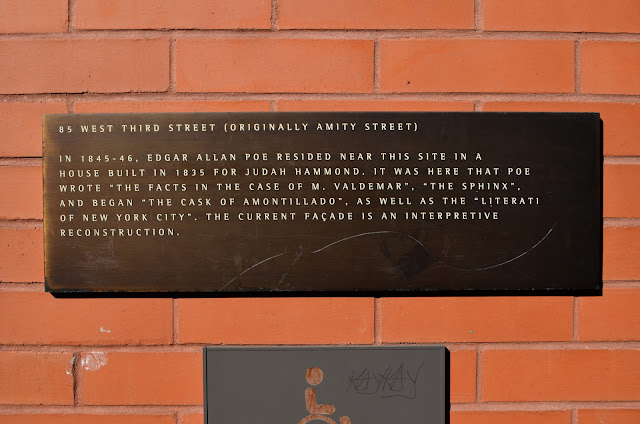 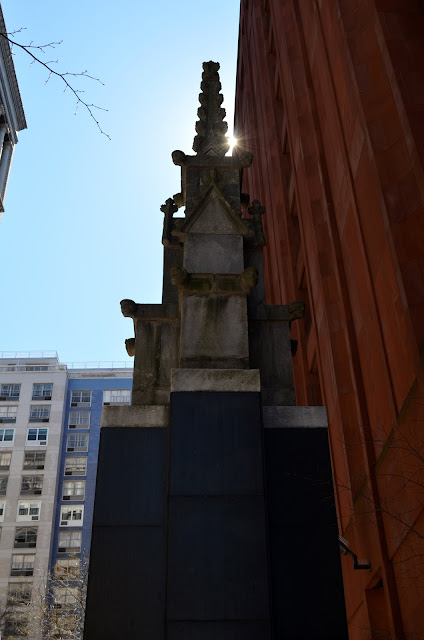 The top of the landmark holds the only remaining piece of the original Gothic Revival-styled building of New York University's first campus, which was built in 1835. When it was demolished in 1894, the school decided to keep the spire at its Bronx dorms. When those buildings were sold in the 1970s, the peak of the original was moved to where it is today. 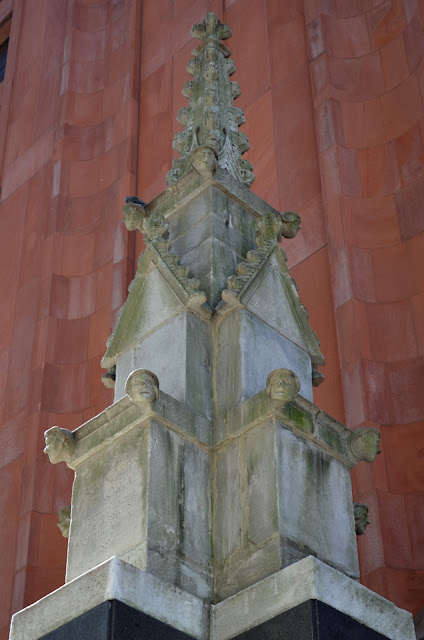 Now, as if floating along Minetta Creek, cut through Washington Square Park - all the while keeping in mind that the park was once New York City's largest pauper's grave - and cross over to 2 W 5th Avenue, and you can see a plaque on the exterior of the building where Minetta Brook once poured forth. 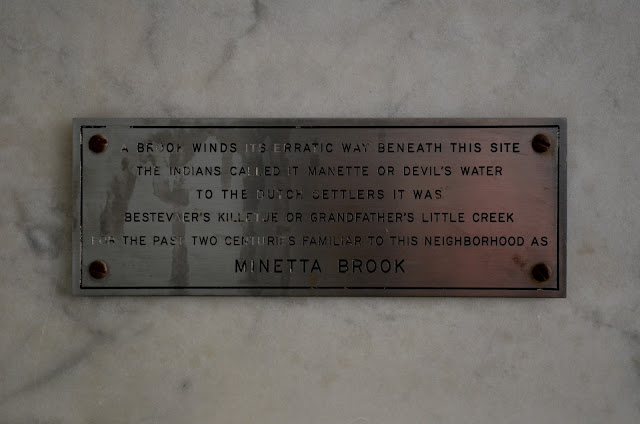 
A brook winds its erratic way beneath this site.
The Indians called it Manette or Devil's Water To the Dutch settlers it was Bestevaer's Killetje or
Grandfather's Little Creek For the past two centuries familiar to this neighborhood as Minetta Brook.

The last stop on this trek is just a hair outside the West Village, but sits just east of Washington Square Park, so I thought to include it. It is 23-29 Washington Place (between Greene Street and Washington Square East), known as the Brown Building. 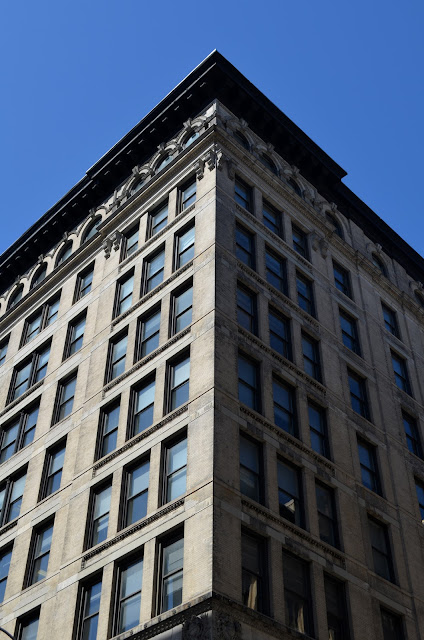 Built in 1900, it was originally named the Asch Building, after its owner, Joseph J. Aschonce.
The building's top floors were once occupied by the Triangle Shirtwaist Factory, and it is the site of a terrible fire, which killed 146 garment workers on March 25, 1911.
In case you think me a little morbid in pointing this out, New York's Landmarks Preservation Foundation marks the spot with a plaque on the southeast corner. 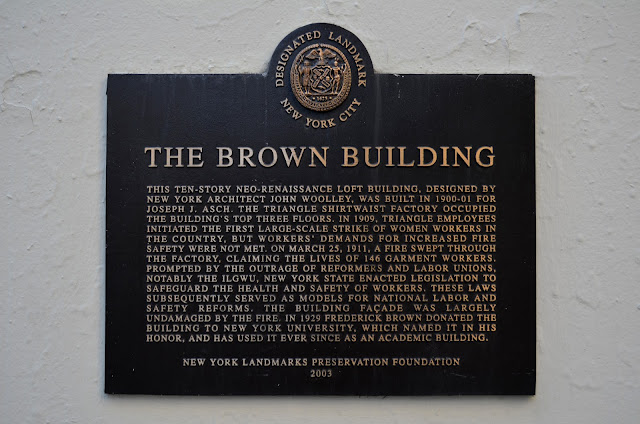 While this walk ends on a sad note, do know that the deaths were not in vain, as the fire led to legislation improving safety standards for workers, and helped spawn the International Ladies' Garment Workers' Union.
The location was entered into the National Register of Historic Places in 1991, and was designated a New York City landmark in 2003.
Posted by A156

As with my posts on the Hudson River (of that, see part one here, and two here), I'll be partitioning this entry in two. Seeing that the West Village has quite a number of interesting spots, I'll break it down into walking in two circles, with this as the first circular walk on the west side of the West Village.
We begin at 56 7th Ave S, with one of the few advertisements for a business you'll ever find on this site: Greenwich Locksmiths, and their wonderfully wild facade. 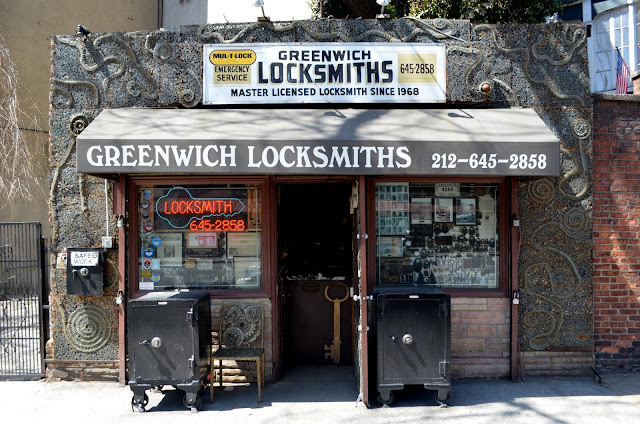 Opening in 1968, the building stayed much the same, until in 2008 when owner, Phil Mortillaro, had the idea to cover the front - using 50,000+ keys - to portray his version of Starry Night by Vincent Van Gogh. It took him until 2010 to complete the work. 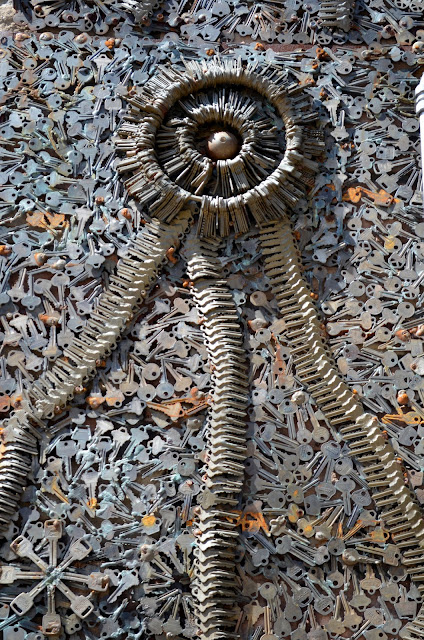 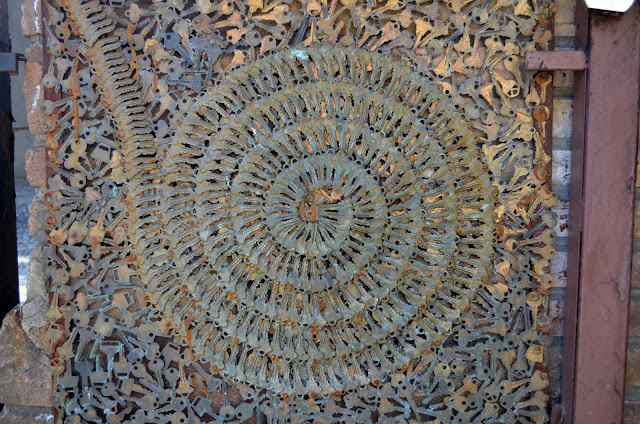 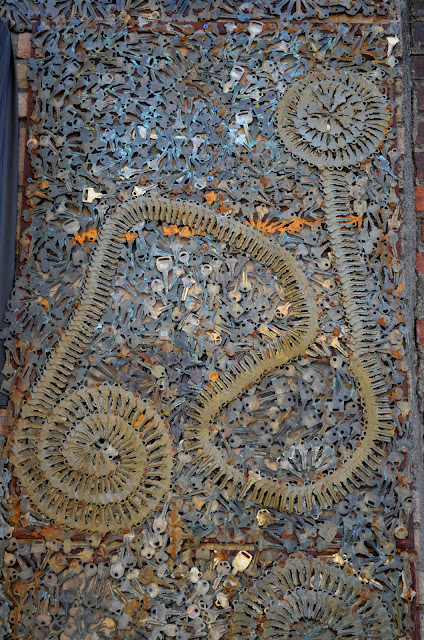 Walk a little south, and then make a right to go up Bedford Street for some post-Colonial American history.
On the corner of Commerce Street and Bedford is 77 Bedford, which is the oldest house in the area.
Built by copper magnates, and known as the Isaacs-Hendricks House, it was constructed in 1799, using wood, but later converted to brick in 1836.
Next door to it, at 75½ Bedford is the thinnest house in all of New York City, with an exterior width of 9 feet (2.7 meters), and an interior of 8 ft (2.4m). Built in 1873 as a cobbler's shop, the small plot of land was then converted into a candy factory in 1880, when candy heiress Martha Banta bought the property. It later passed from owner to owner, but its size made it an interesting entry into the New York Historical Society newsletter, complete with a photo, in 1922.
Sadly, I couldn't take a decent picture of either (except for the door at 75½), due to both being under construction. 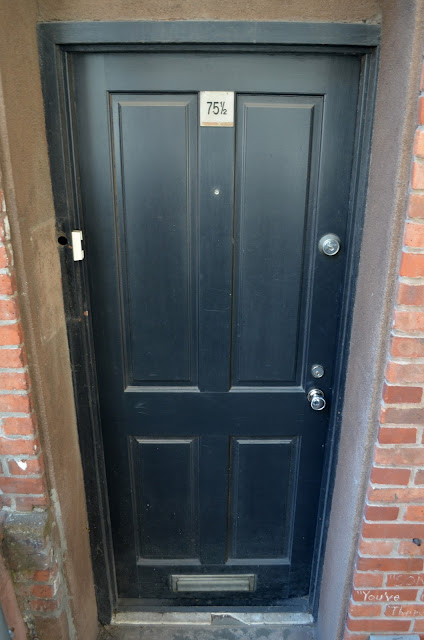 As you walk north on Bedford Street, always look up at the corners of buildings. There, one can usually spot markers with a bit of history about the area. 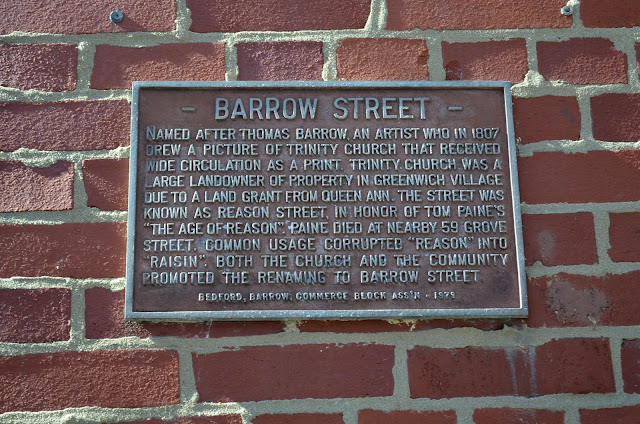 Still on Bedford, one will soon approach 17 Grove Street, in which stands the oldest wood home in Manhattan. 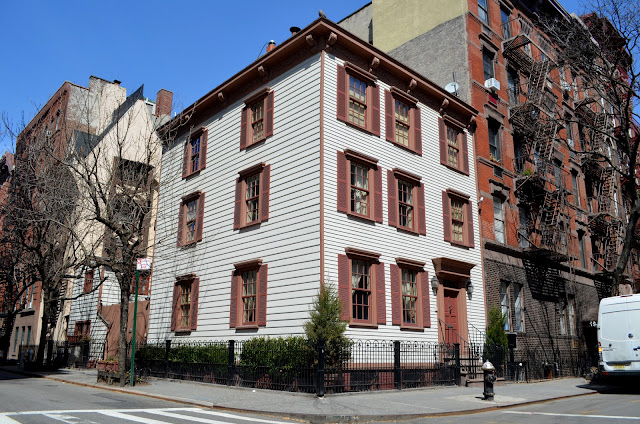 Constructed in 1822, the building was two-stories tall, until 1870, when a third floor was added. The house was originally owned by sash-maker William F. Hyde, but the public can take a look inside every year, when the Greenwich Village Historical Society does its annual "house tour".
Keep walking north, and then make a left, onto Christopher Street, to check out Weehawken Street: Manhattan's shortest block. 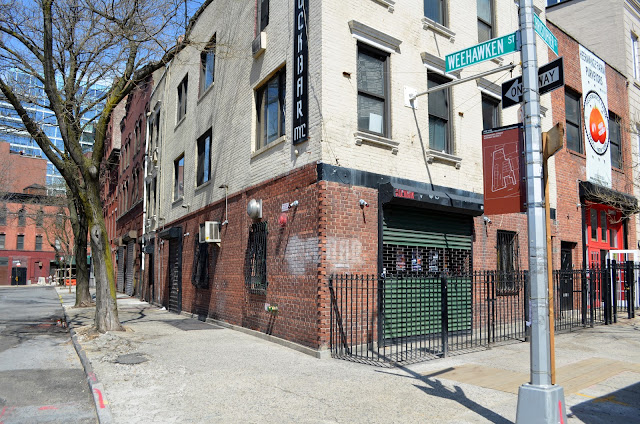 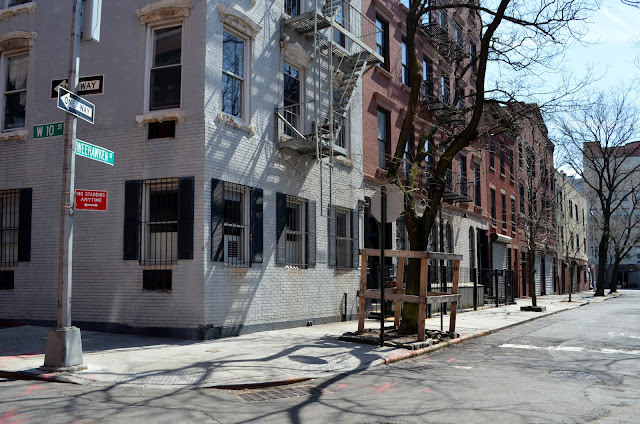 The street used to have an amazing set of "no urinating" signs, that were often photographed by visitors, but have since been removed. You can see a classic one online here.
Now, walk two blocks north, and back east a bit, to 121 Charles Street, where an anomaly stands.
No one is certain when it was first built, though tax records do show the home appearing on maps in 1898. What makes this so strange is that the farmhouse, which sits on this small triangular-shaped lot, wasn't even here until 1967. 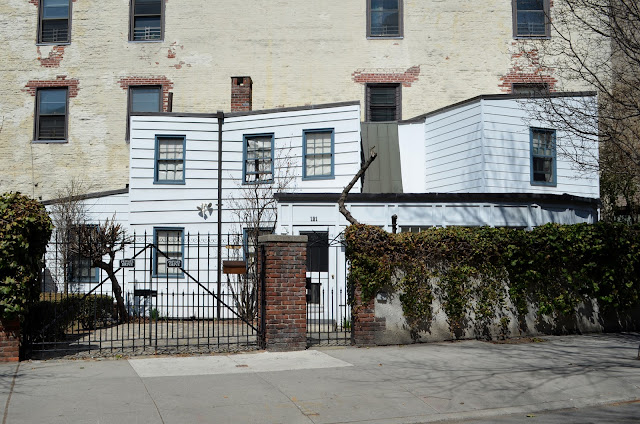 The building originally stood at 71st Street, and York Avenue, and, in the 1940s, was owned by author of Good Night Moon, Margaret Wise Brown. 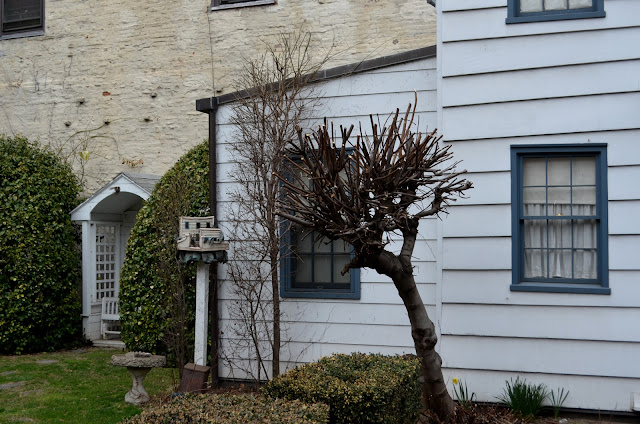 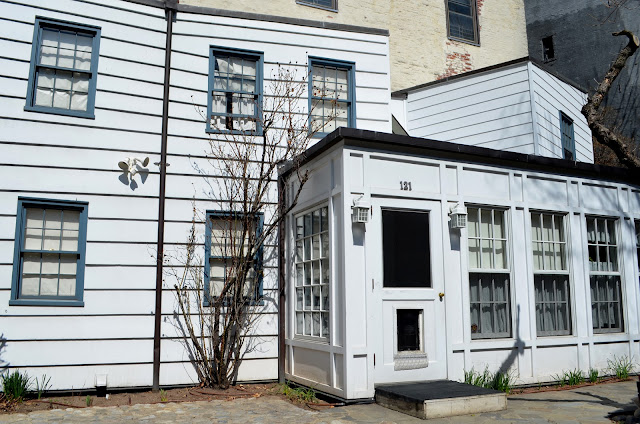 In the 60s, the Roman Catholic Archdiocese of New York bought the land, and the house was scheduled to be demolished, so as to build an old-age home. 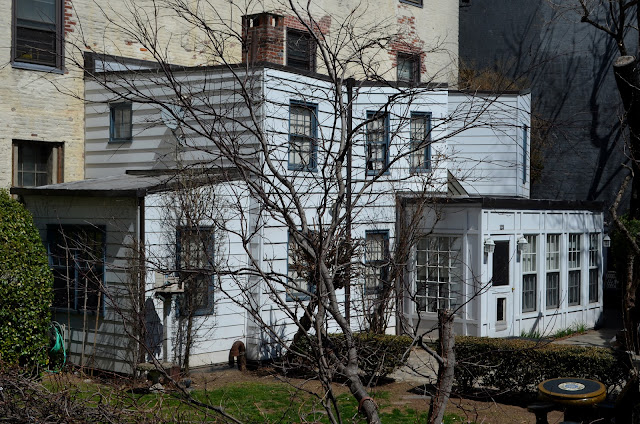 On March 5th, 1967, with the help of architect William C. Shopsin, and at a cost of $6500, Swedish-born Sven Bernhard, who lived at there at the time, had the structure - in its entirety - moved to where it is today.
Now, the last spot visited on this roundabout isn't weird, so much as it is historically significant, and quite interesting.
On  June 28, 1969, the patrons of the Stonewall Inn, were tired of the police harassment, and constant arrests, simply for their sexuality, and rioted against their mistreatment. 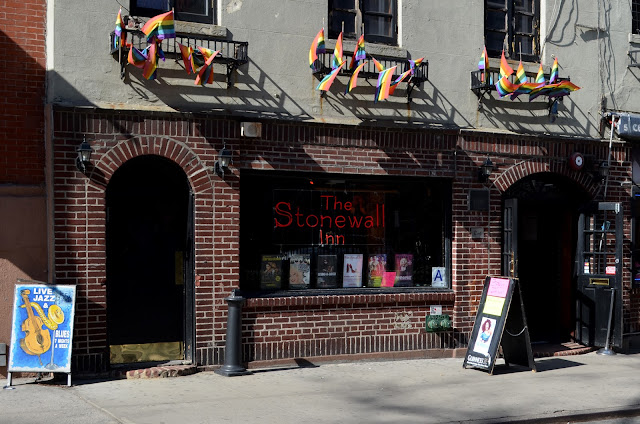 This one act opened the door for, what was then called, the Gay Liberation Movement in the United States. The Stonewall Inn was originally opened in 1967 (at 51-53 Christopher Street), and was then the largest gay establishment in the U.S. Closed soon after the riots, the spot reopened as a shoe store, a bagel shop, and later a Chinese restaurant. In 1990, the bar reestablished itself (at 53 Christopher), and was entered as a National Historic Landmark in 2000.
Posted by A156