Nestled along the East River stands Waterside Plaza. Located on the east side of FDR Drive, between 25th to 30th Street. It holds some wonderful views of Brooklyn... 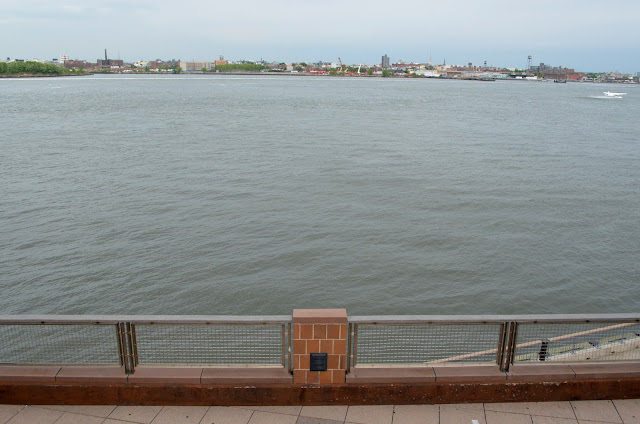 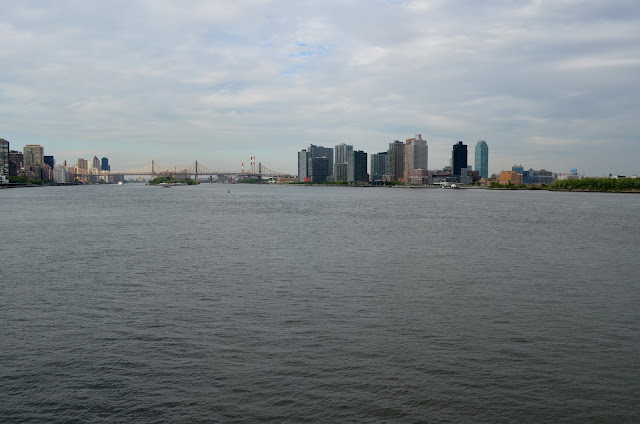 Designed in 1966 by the architecture firm Davis, Brody & Associates, the first building was opened in 1973. Originally a housing development, the Waterside Management Company threw $35 million towards a three-year improvement program in 2004, publicly opening the four towers of 1,470 units and 25 townhouses to all. 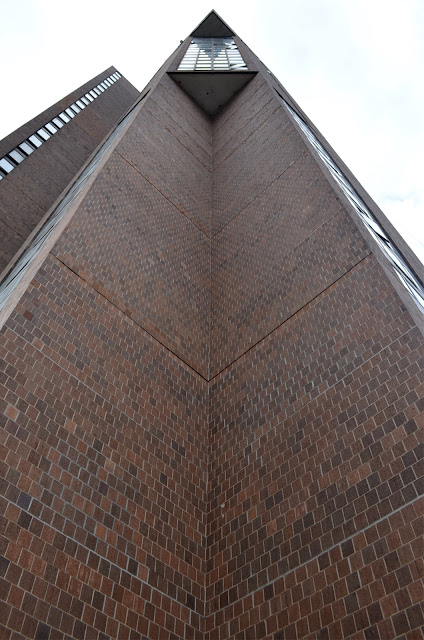 What makes this triangular-shaped landmass so interesting is that it's mostly made up of rubble from England. The structures were built atop a landfill created using debris from the city of Bristol after its bombing by the German Luftwaffe during World War II. 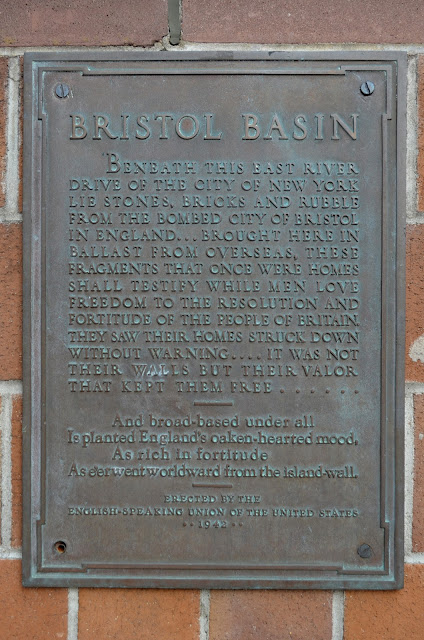 Brought over in the ballast of ships, the buildings were later constructed on a platform with 2,000 pilings dug 80 feet deep into the scree on the shore of Kips Bay. 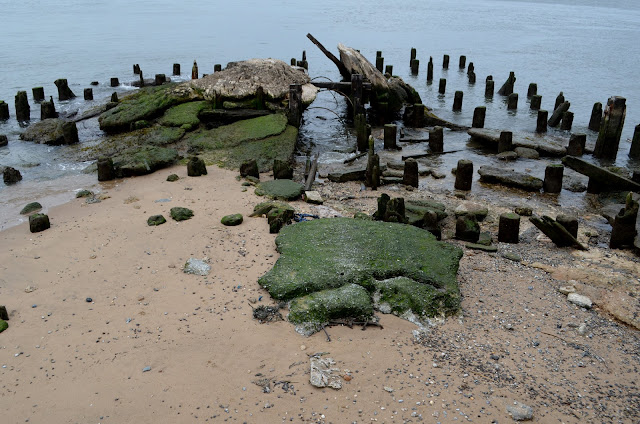 The area was to be expanded in the 1980s, but scrapped due to resistance by the community, as well as environmental concerns.
The United Nations International School is located just to the south of the complex, with - fittingly enough - the British International School of New York holding lease in a number of the commercial spaces.
Posted by A156

Battery Park City is a beautiful residential area of southern Manhattan, located right next to the Financial District, which was created from the three million cubic-yards of rock and soil excavated from the construction of the New York City Water Tunnel, and the World Trade Center, as well as tons of sand dredged from the city's harbor.

From the late 1800s to the 1940s, some of the district was known as "Little Syria" due to the large Middle Eastern population, but, in 1966, Governor Nelson Rockefeller proposed the creation of what would become Battery Park City. In 1968, the Battery Park City Authority (BPCA) was created by the New York State Legislature, and, in 1972, $200 million was set aside to fund construction.
Though the area's population has tripled since 1990, there aren't many interesting oddities around here.
One notable spot, however, would be the Irish Hunger Memorial, off North End Avenue and Vesey Street. 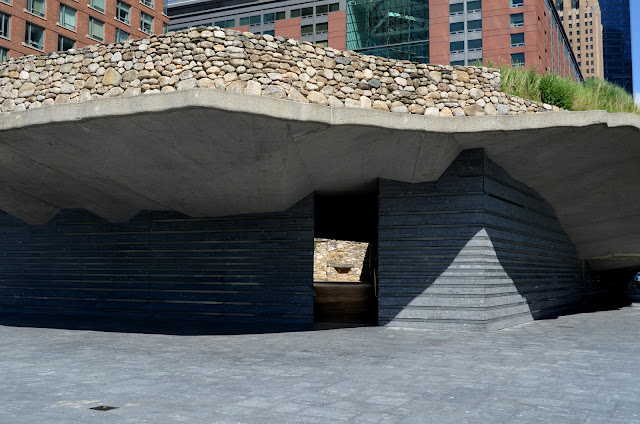 Designed by artist Brian Tolle, and landscape architect Gail Wittwer-Laird, with backing by the firm 1100 Architect, the memorial is dedicated to the million lives that were lost in the Great Irish Famine of 1741. Construction of the memorial began in early 2001, and finished - despite the 9/11 attacks, which damaged a bit of the area - in July of 2002. 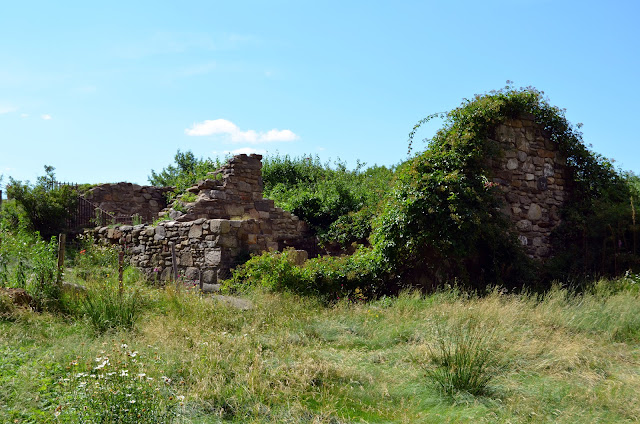 The plot is made up of soil, and native plants from the western coast of Ireland, while the rocks were collected from all thirty-two original counties of Ireland. 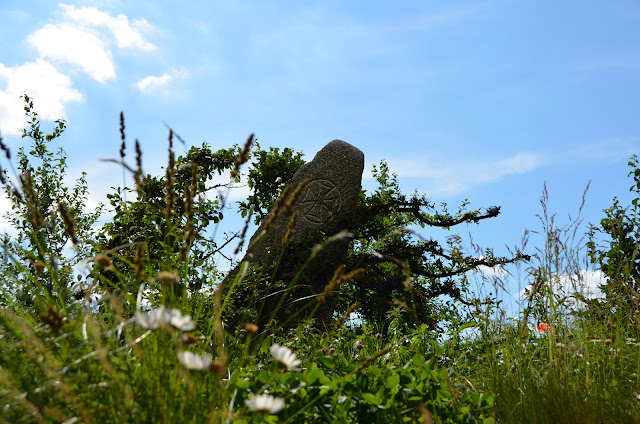 Within the memorial stands a real Irish cottage from the 19th century. The little home once belonged to the Slack family from Carradoogan, in the county of Mayo. It had been deserted since the 1960s, so the family donated the building for the project, and it was reconstructed as it originally stood back in Ireland. 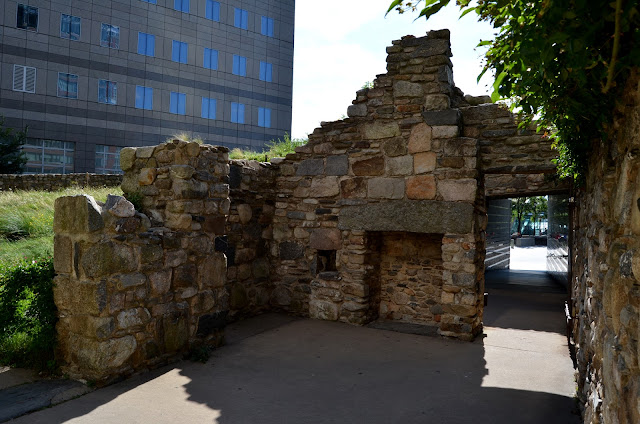 Afterward, and especially if you have children, go see one of Manhattan's most beautiful public parks: Teardrop Park. 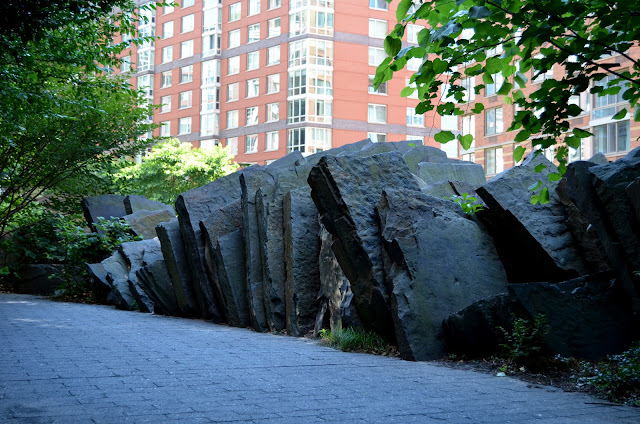 Only two blocks north of the memorial (off Warren Street), this park is an amazing place for both children, and adults. 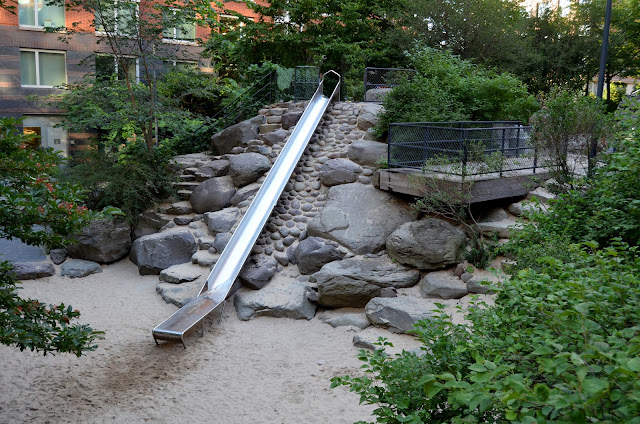 Built in two separate sections (the north in 2004, and the southern portion in 2008), the park was designed by the NY architecture firm Michael Van Valkenburgh Associates, in collaboration with "play experts" at the Natural Learning Initiative. 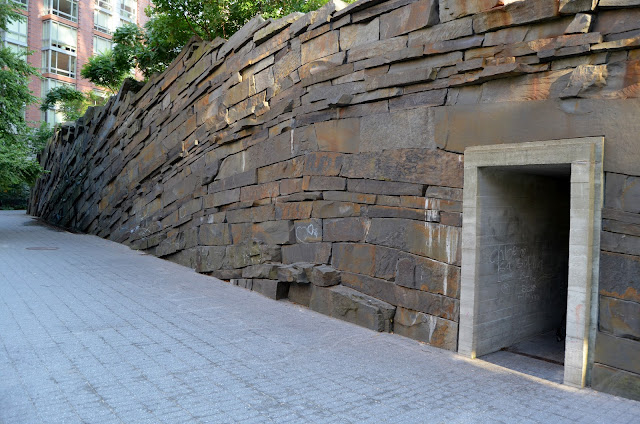 The slabs of sedimentary rock throughout the park, while climbable, are installations designed by artist Ann Hamilton. Collected from all over the state of New York, the pieces are stacked to mirror natural stratum, and even hold a hidden water spout so icicles will form in the winter.
The small doorway is in tribute to Frederick Law Olmsted, who created many of the tunnels in Central Park. 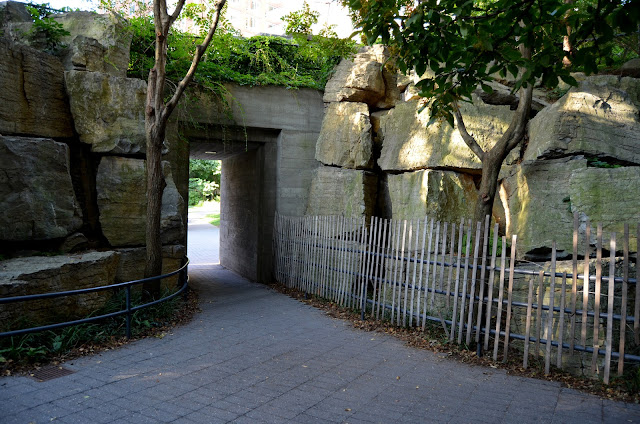 The park was designed to conform with Battery Park City's Green Guidelines, such as reusing water collected from the surrounding buildings for irrigation, while the soil mixture is designed to help plants grow without using fertilizers, or pesticides.
Now go play, friends.
Posted by A156