There isn't much to see in Calvert Vaux Park in Gravesend, Brooklyn, but if you happen to be in the area, do check out its shoreline. The park's ground was created out of sand, and rock, trenched from the construction of the Verazanno-Narrows Bridge, and while it holds a few baseball diamonds, and a soccer field, the real reason those who visit this blog would want to stop by would be to check out the remains of Quester I, an abandoned submarine. 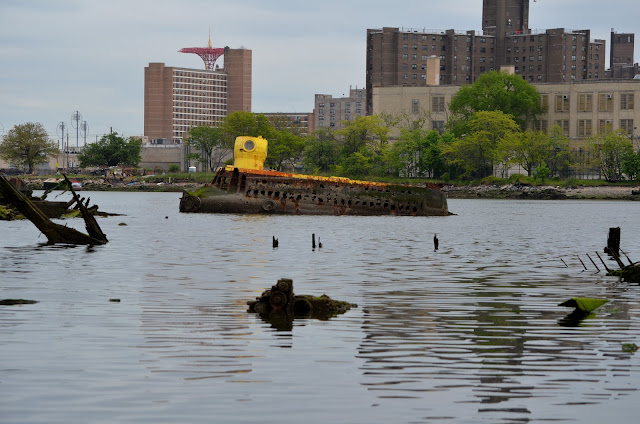 In 1966, a Brooklyn Navy Yard ship worker named Jerry Bianco had the idea to build a small submarine to raise the wreck of the SS Andrea Doria, which shipwrecked off the coast of Nantucket Island on July 17, 1956.
After finding a handful of investors, he, and his two sons, began construction the following year, using mostly salvaged metal. 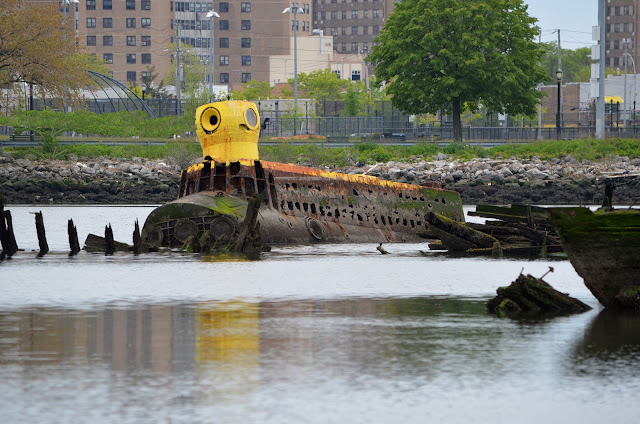 By 1970, he had finished his dream, and created a 40 ft (12 m), 83 ton (75 metric ton) submarine, painted with yellow zinc chromate. It passed Coast Guard and Navy inspections, and was ready to launch on October 19, 1970.
Sadly, when lowering it into Coney Island Creek, the crane operator did not listen to Bianco's instructions, and the sub tipped sideways making it unusable. 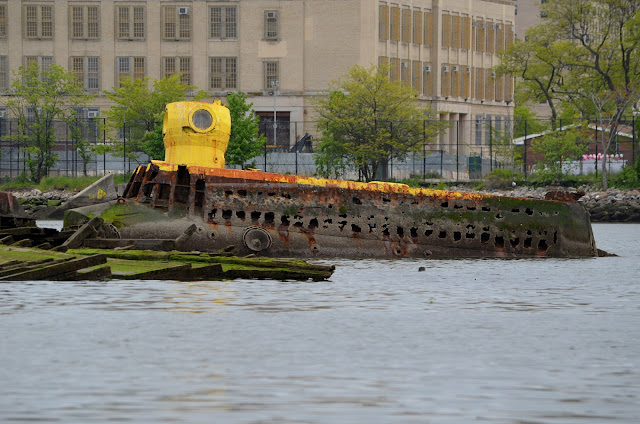 Then docked, Jerry worked on the submersible for another year or so, but investors - already weary from its poor launch - backed out, and, without funding, the Quester I just sat there for years.
A storm in 1981 loosened it from its posts, and it became lodged in the muddy banks of the creek, where it has sat since.
If you're into dystopian landscapes, or have a case of cacophilia, keep walking along the shore of the park, and you will see sights that will certainly delight you. 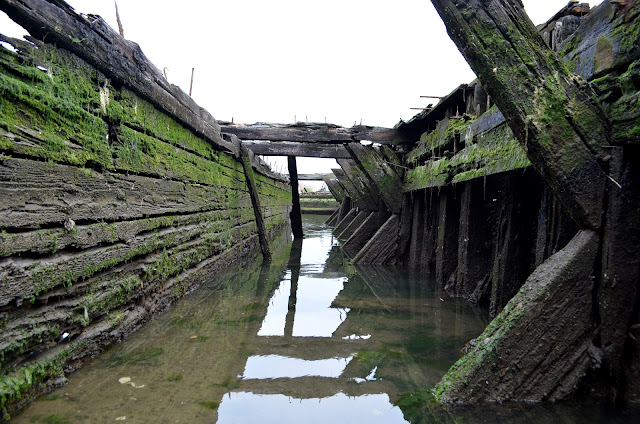 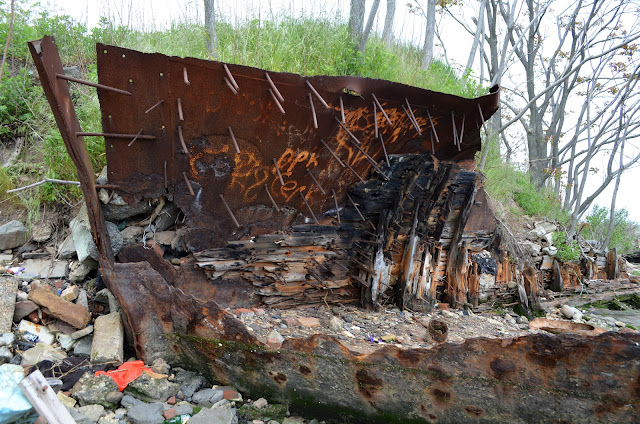 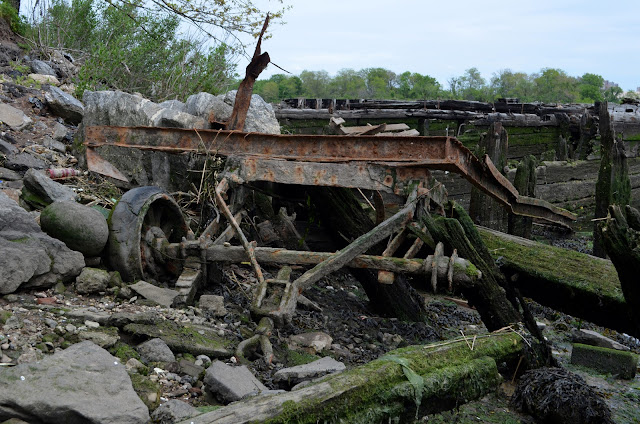 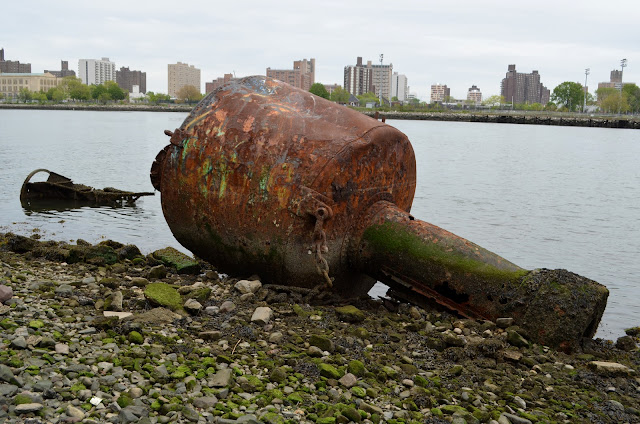 If you're on the Coney Island side of the creek, you can still see the Quester I submarine from Kaiser Park, though nowhere near as close as if you were on the Gravesend side. 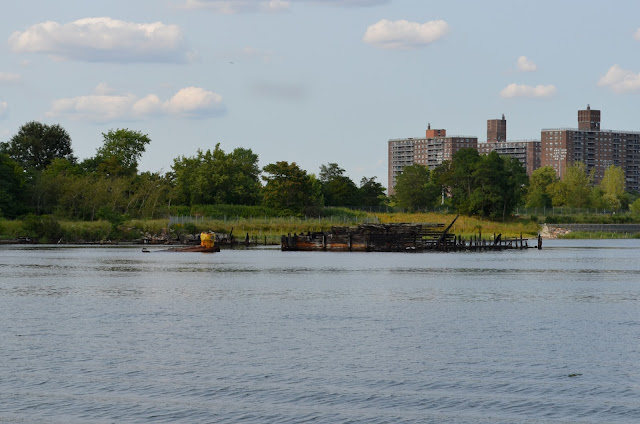 Still, being on this side of Coney Island Creek does have its advantages, such as seeing the old Parachute Jump up close. 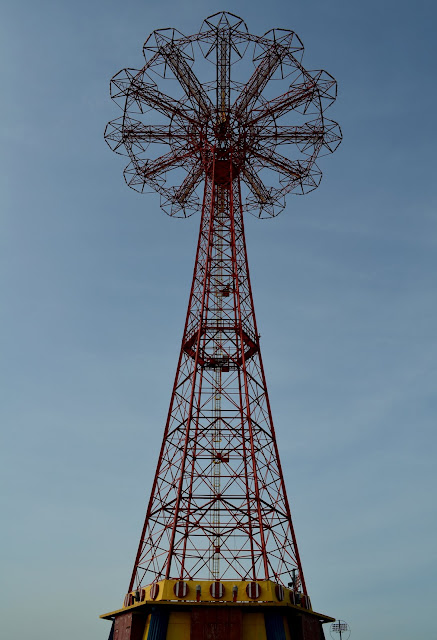 Originally constructed for the 1939 New York World's Fair in Flushing Meadows, Queens, the now-defunct ride was moved to Coney Island in 1941, as part Steeplechase Amusement Park. It is the only ride, and part, of that park still around today.
Built by the Life Savers candy company for $15,000, two passengers were strapped into one of twelve seats under a closed parachute, then lifted by a cable to the top. There, a latch system would open, dropping them, with their descent slowed by the chute. Each two-person seat took three people to manage, making the ride rather expensive to operate, though it cost adults only 40¢, and children 25¢. 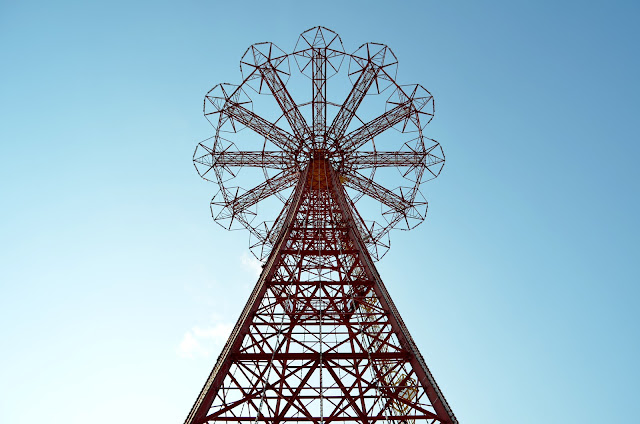 Steeplechase Park bought the tower for $150,000, and the complete ride was disassembled, and moved to its current location. 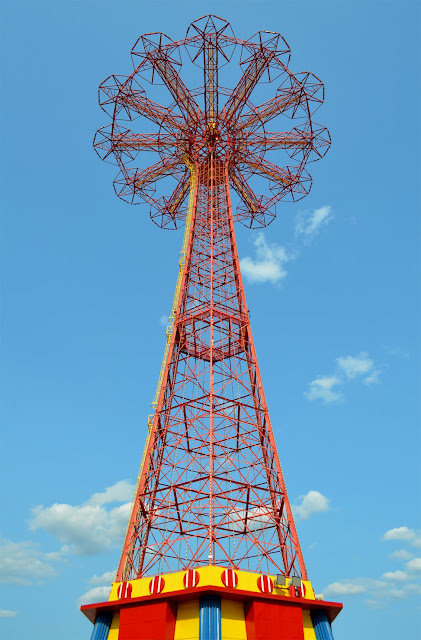 While the park closed in 1964, the Parachute Jump was entered in the National Register of Historic Places in 1980, and New York City recognized it as a landmark in 1989. 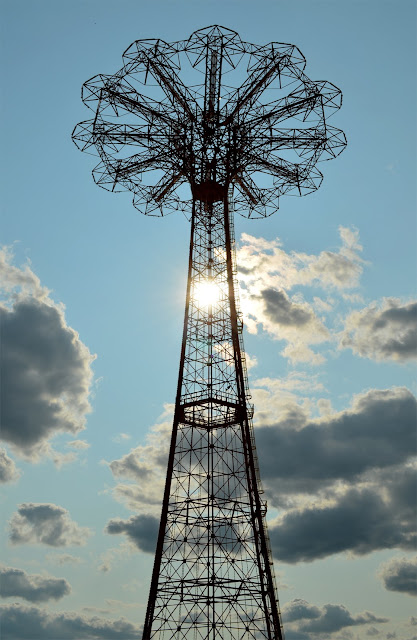 In 2004, Leni Schwendinger Light Projects was commissioned to create LED lighting for the Parachute Jump. Using 8,000 LED lights, the project debuted in July of 2006, with six computer-programmed animated lighting scenarios.
There were other parks in the area, such as Astroland (1962 - 2008), but, like Steeplechase Park, many of its rides were taken down a little after closing, though some stayed for much longer. 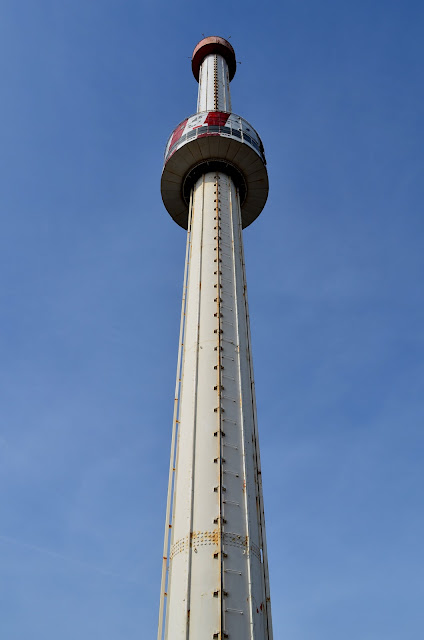 In 2013, the current funfair, Luna Park, was evacuated because one of the last remaining rides from Astroland, the Astrotower (aka Tower to the Stars), began swaying. Within days, the gyro-tower was gone, and Coney Island's scenery changed once again.
Posted by A156

In Glendale, Queens there is a necropolis known as the "Cemetery Belt"; a large group of graveyards pushed there due to the need for space thanks to the Rural Cemeteries Act of 1847. Among them (not too far from the J train, walking north on Cypress Hill Street) sits a small a Jewish mortuary called Machpelah Cemetery. 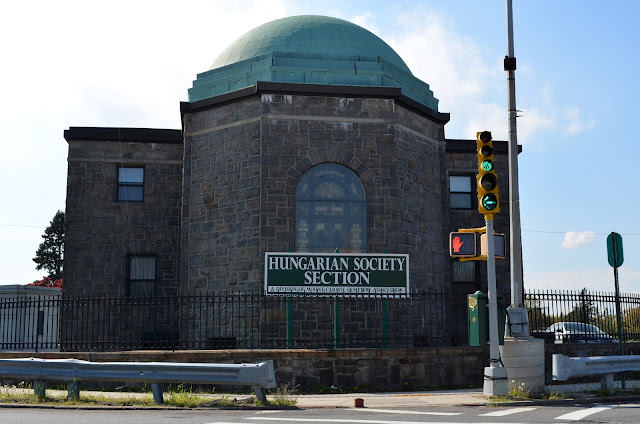 Most of the memorial park is abandoned, and unkempt, with even the office buildings being empty - one of which was bulldozed in 2014. Walking around, one can see why this funerary ground has many dubbing it the creepiest grave site in the city. 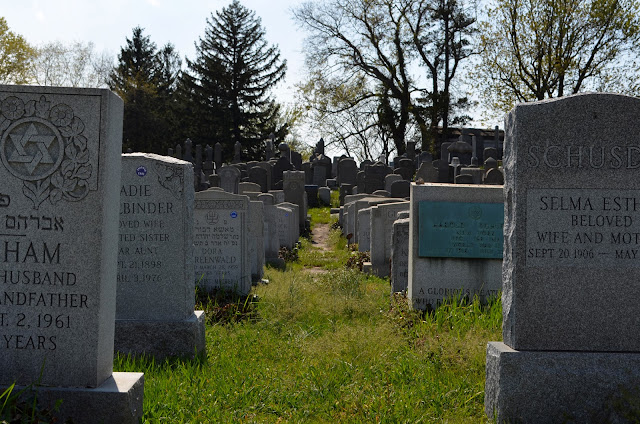 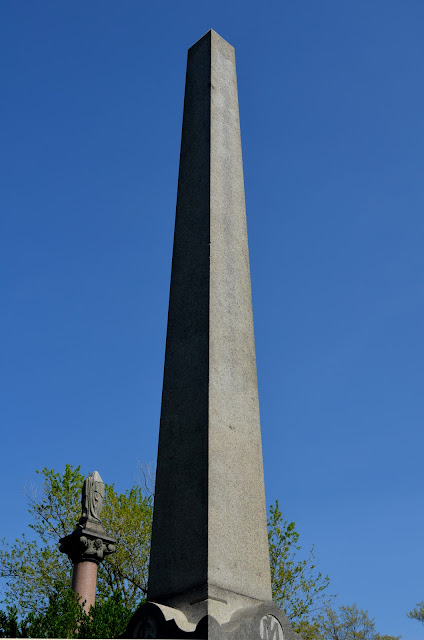 There are few sights to see here, besides two graves of note, both of which are in the same family plot. 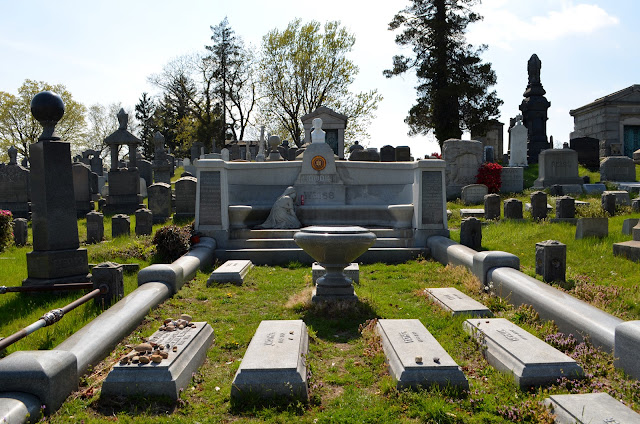 Here lies Eric Weiss, who - at 17 years of age - changed his name to Harry Houdini. 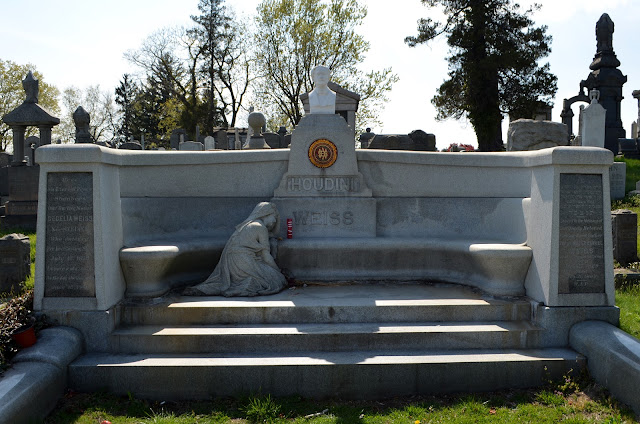 On Halloween of 1926, world famous magician, and escape-artist, Houdini died of peritonitis, due to a ruptured appendix, because two days before some idiot unexpectedly (and purposefully) punched him in the stomach several times, as he was reclining in recovery from a broken ankle.
In pain, Houdini went on to perform his last show at the Garrick Theater in Detroit, MI. After his death, his body was returned to New York, and buried on November 4th, with over 2,000 in attendance.
Though the crest of the Society of American Magicians adorns his family's plot... 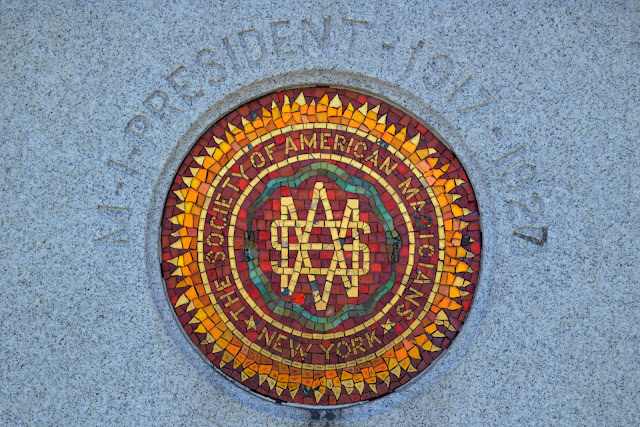 ...many locals were upset when a bust of his likeness was added the following year, because images of the dead are not allowed in Jewish cemeteries. 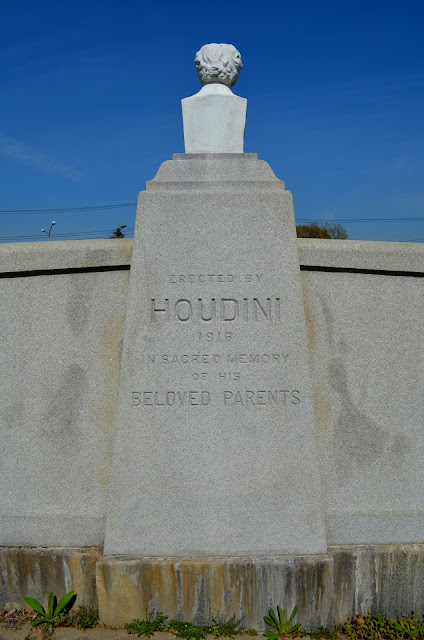 This has not stopped vandals from either destroying or stealing it, as it has been desecrated four times between 1975 and 1993. The Society of American Magicians gave up replacing it, and even stopped care of the grounds. In 2011, the Harry Houdini Museum in Scranton, PA, replaced the bust, and decided to pay for someone to take care of the grave site. 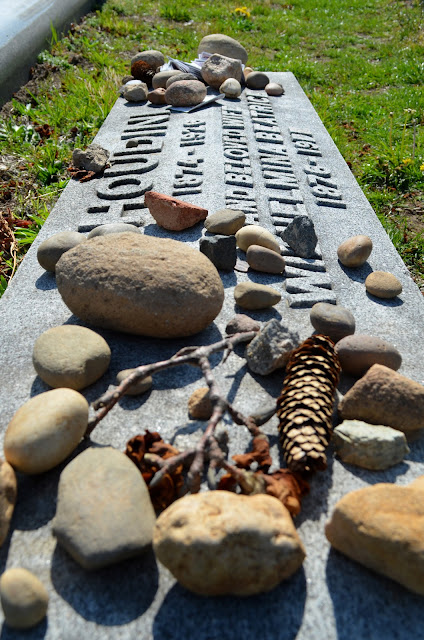 The other distinguished burial here is of Ferenc Dezső Weiss, who was Houdini's younger brother, and was also a magician and escape artists, billing under the name Theodore Hardeen. 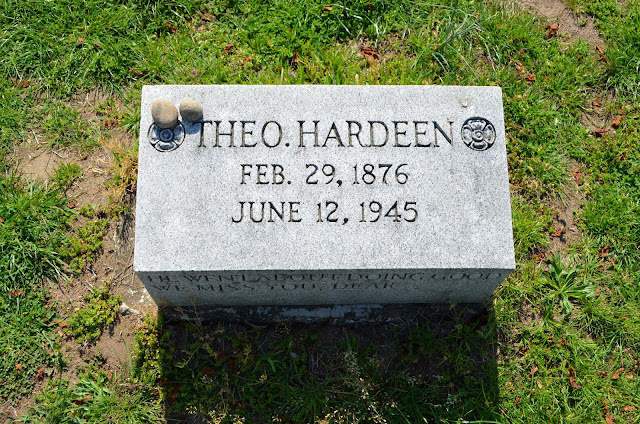 Hardeen was the first to perform escape stunts in view of the audience, over hiding behind a curtain. He had also starred in a few movies, such as the Warner Bros short Medium Well Done, and the hilariously bizarre 1941 film Hellzapoppin'.
At 69 years old, he died of complications during surgery, only a year after he founded the Magician's Guild.
If you are thinking of visiting, I would suggest any day of the week, besides Saturdays when the gates are locked due to Shabbat, as well as Houdini's death anniversary of Halloween, because of the deluge of fans, and the curious, plus there tends to be a heavy police presence.
Posted by A156