Under the New York side of the George Washington Bridge is a small parcel of land known as Jeffrey's Hook, located in a section of Fort Washington Park called Ft. Washington Point. There, you will find what many call the "Little Red Lighthouse", whose formal name is the Jeffrey's Hook Light. 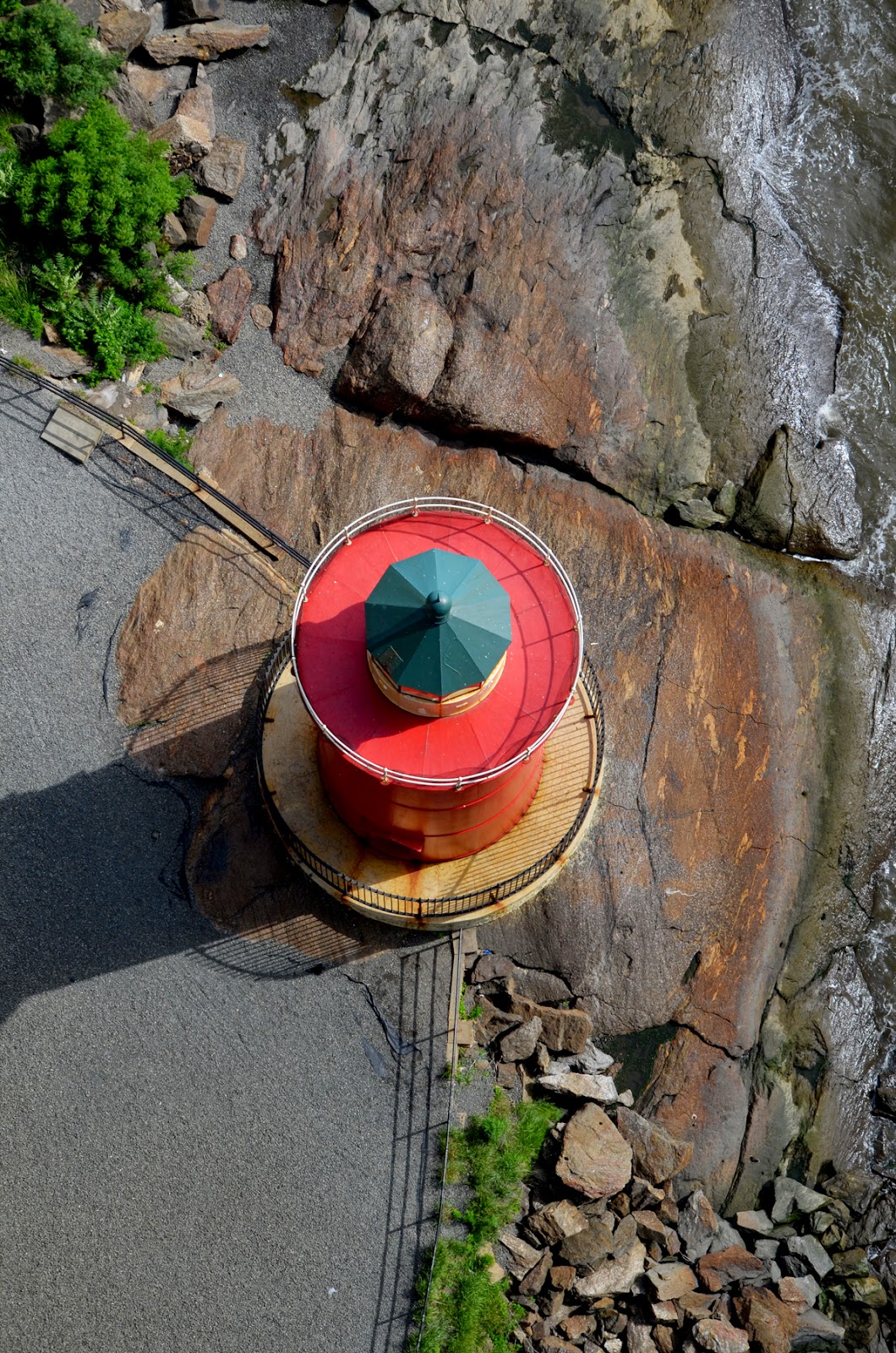 In 1889, before the city even acquired the area as a park (1896), the local government placed a red pole, which stretched out over the river, to prevent accidents. 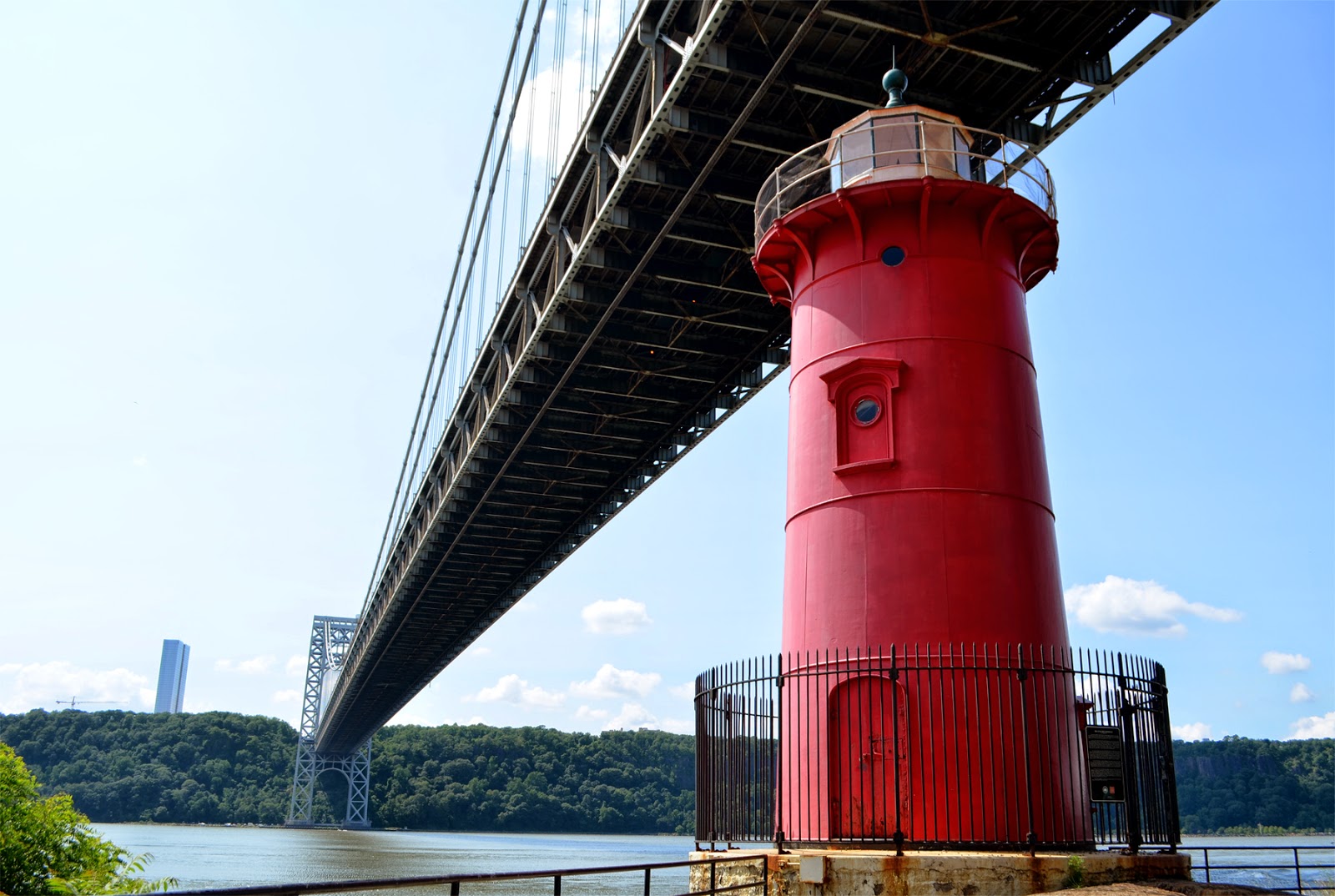 Though it was originally constructed as the North Hook Beacon at Sandy Hook, NJ in 1880, it was moved to where it is now in 1921 by the Coast Guard, so as to replace the pole.
Sadly, upon the completion of the GW Bridge in 1931, it was deemed antiquated, as the bridge contained navigational lights. 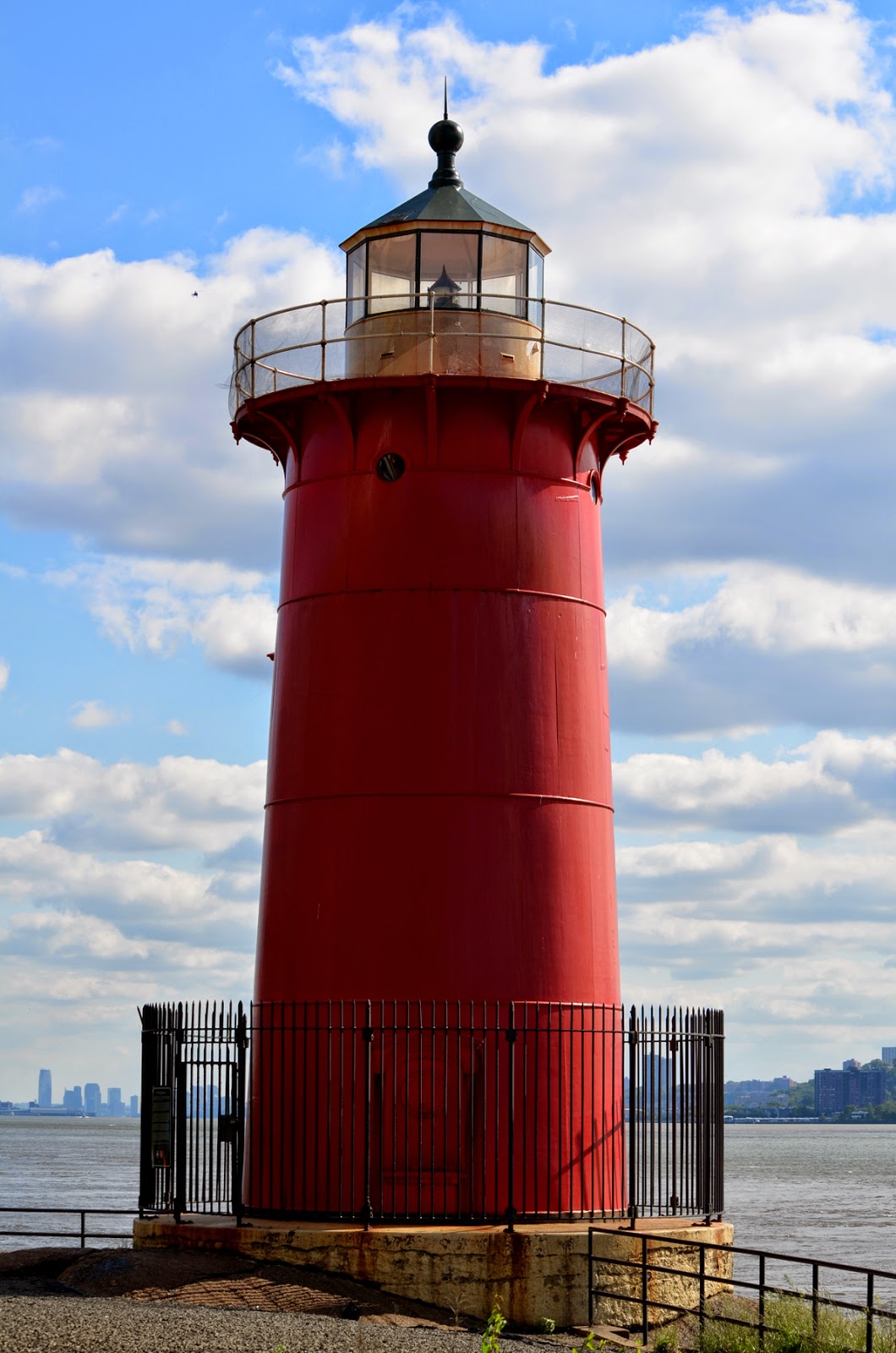 The lighthouse's last official use was in 1948, as it was deactivated, with a plan to auction it off. The public complained - thanks in part to admirers of the 1942 children's book, The Little Red Lighthouse and the Great Gray Bridge, by Hildegarde Swift - and the Coast Guard finally donated the structure to the city's Department of Parks and Recreation in 1951. Jeffrey's Hook Light was added to the National Register of Historic Places in 1979, and gained landmark status in 1991. 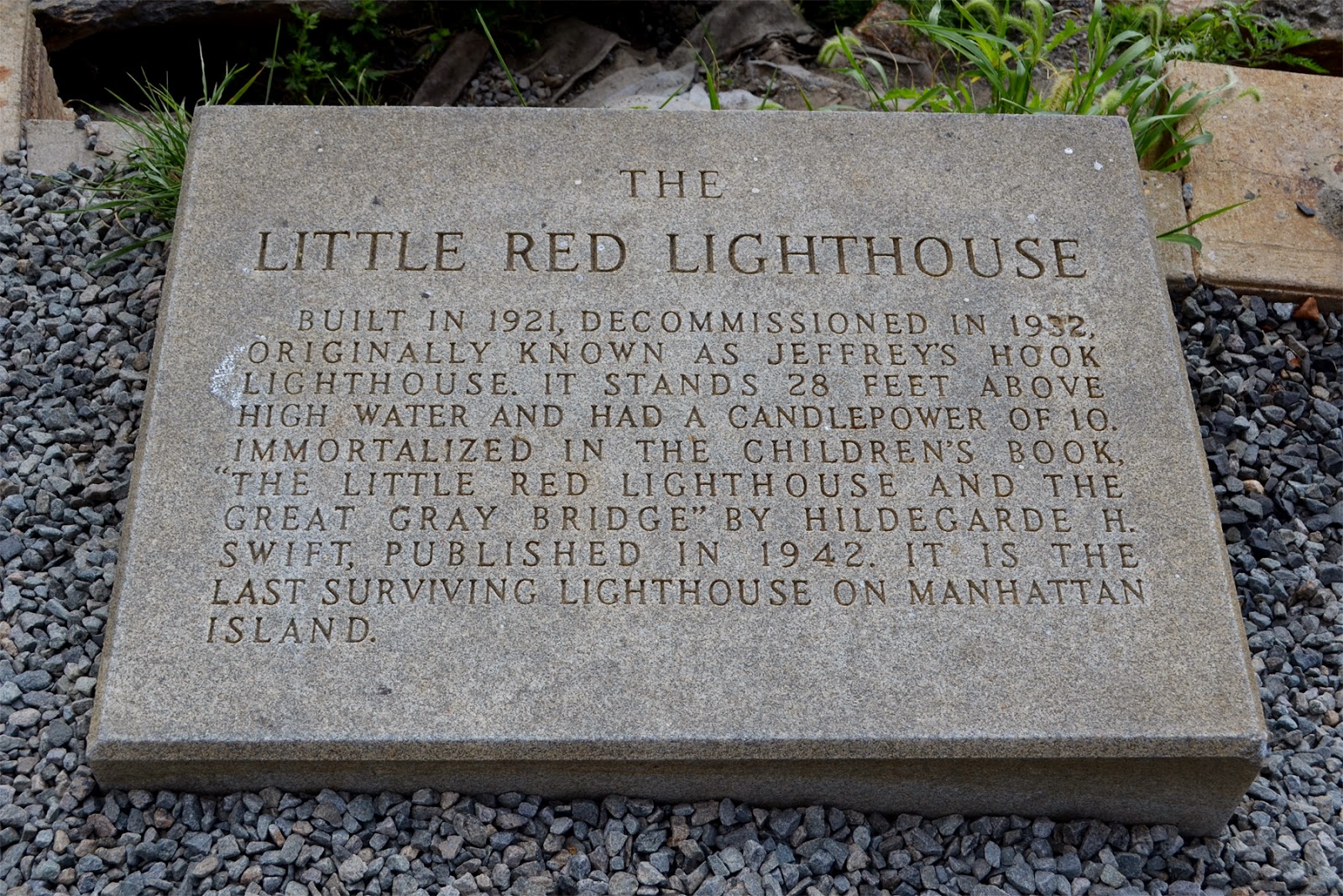 Tours of the house are sometimes provided by the Parks Department's Urban Park Rangers, once a month, between June and October, as well as on Little Red Lighthouse Festival Day (a 3-day celebration in October), and Open House New York Day (another 3-day event held in October).
In 2002, the beam of New York City's only remaining lighthouse was reactivated, and still gleams today.
Posted by A156

The southwest corner of Christopher Street, and 7th Ave, in the West Village is a little strange (and I mean little).
Directly in front of a cigar store entrance is a small, mosaic badge, reading:


"Property of the Hess Estate which has never been dedicated for public purposes."

It is the outcome of a conflict between the city, and the estate of David Hess, a Philadelphia landlord, beginning in 1912.
At that time, the city claimed eminent domain on Hess' 5-storey Voorhis apartment building (named after judge John Van Voorhis' family), so as to expand, both, the IRT Subway, as well as 7th Ave. The family was furious, but discovered that a section of land was left off a corner of the plot, and filed a notice of possession, which they obtained.
The city petitioned the family to give the land back, but they refused, and had the tiled plaque installed in 1922.
In 1940, the owners of the tiny triangle finally sold the "world's smallest property" to the cigar store for a grand, at .60¢ per square centimeter (about $2 a square inch).
It has seen better days, as it is now cracked beyond repair, but still a sight to see when walking by. 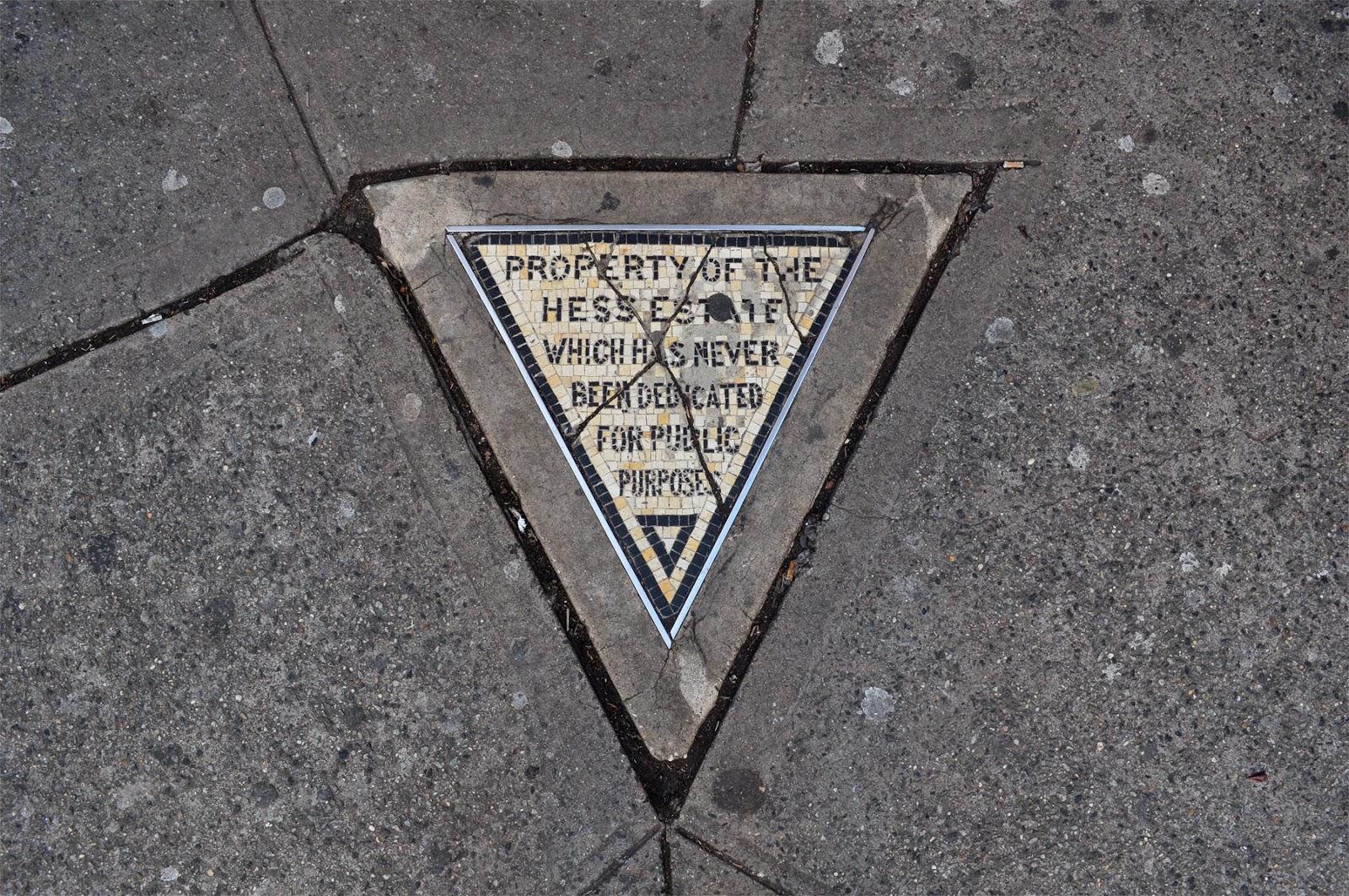