Along the water, in the neighborhood of Sunset Park, is the U.S. Army Military Ocean Terminal Brooklyn Army Base, or more commonly known as the Brooklyn Army Terminal. It's a large industrial area of almost 100 acres (40 ha.), which was a part of the New York Port of Embarkation's Army command. 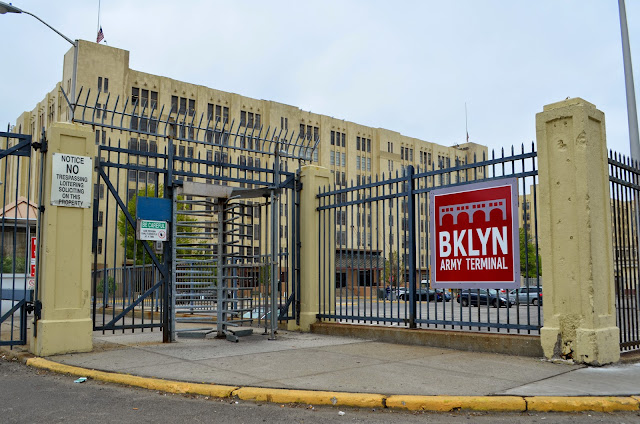 The U.S.'s largest military base during WWII, was built in 1919, and designed by Cass Gilbert (who also did the Woolworth Building). 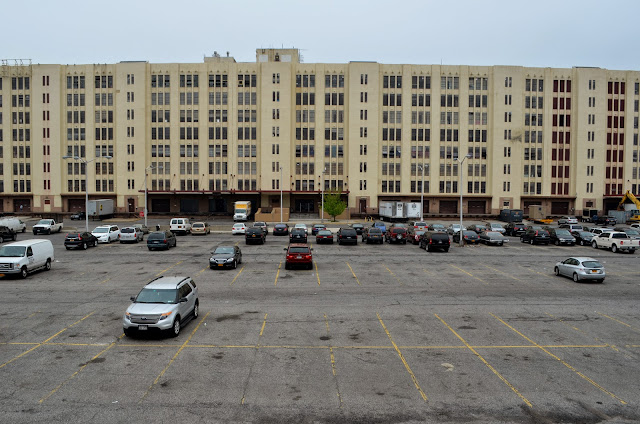 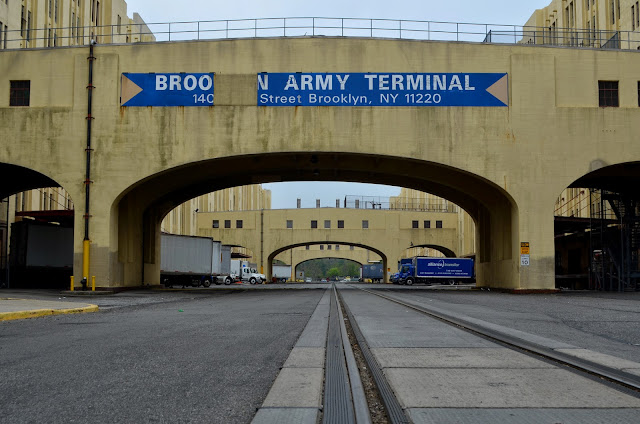 Falling into disuse by the 1970s, the feds sold the property to New York City in 1981, and, in 1983, had the area entered into the National Register of Historic Places.
Currently, the building houses organizations such as the artist studio program Chashama, a branch of the Guggenheim Museum, and the New York City Police Department Intelligence Division. 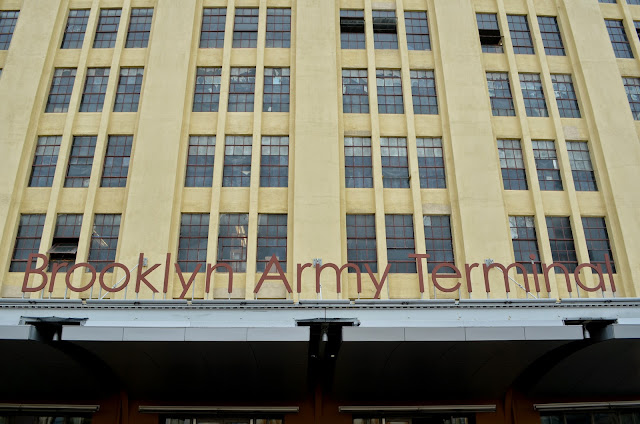 The entire area is off-limits to nomadic or wandering sightseers, but if you'd like to see within the gates, there are tours given throughout the spring, summer, and fall, by different groups around the city.
It is worth the effort alone for a view of Building B's atrium. 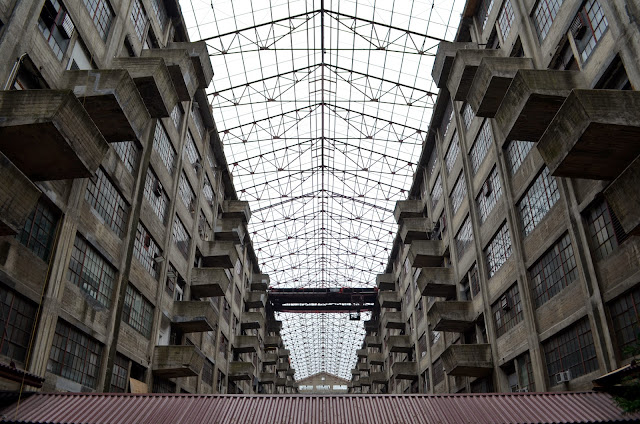 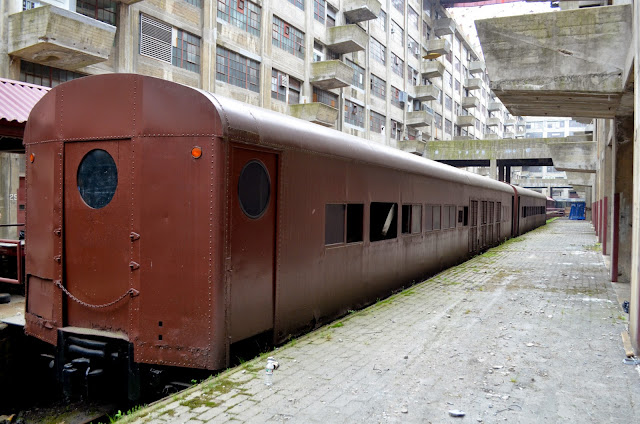 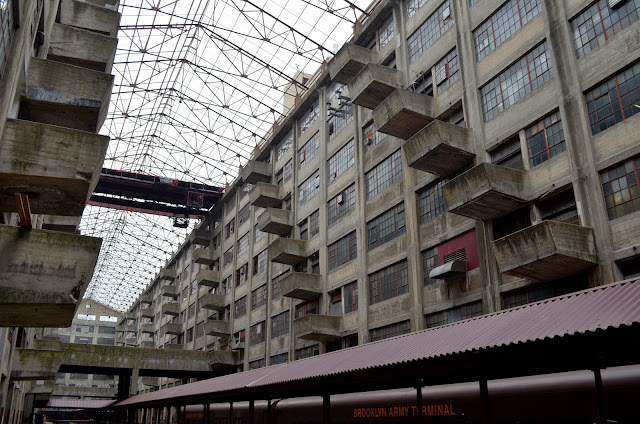 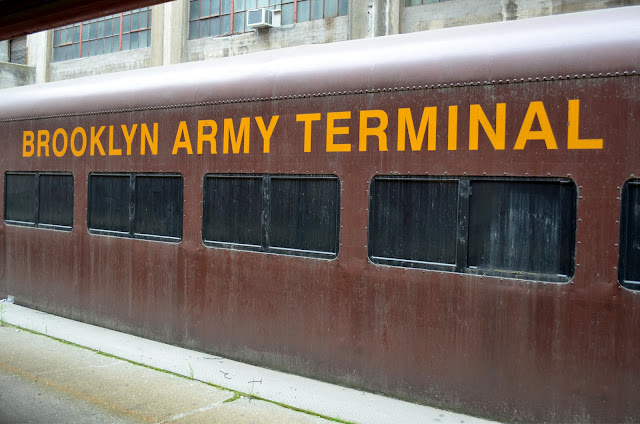 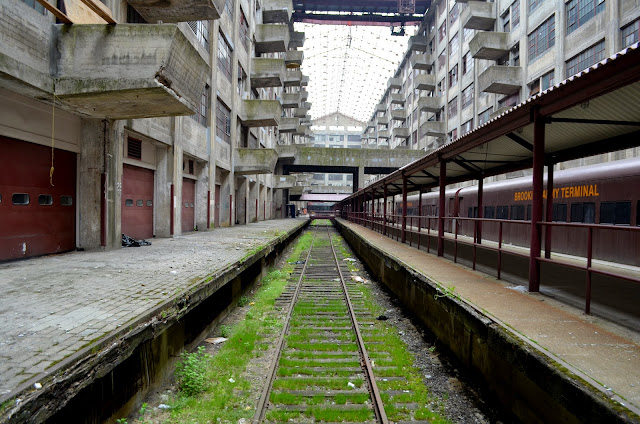 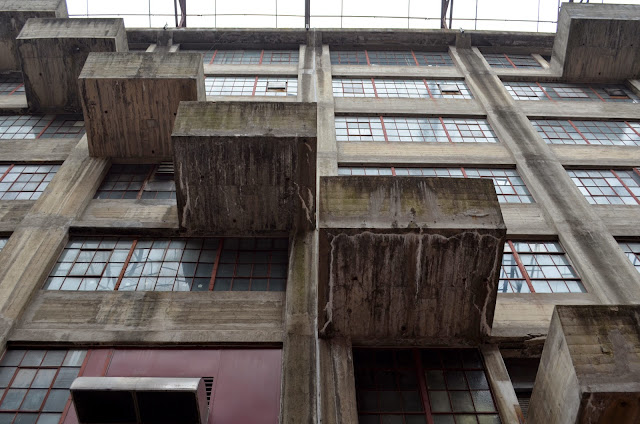 They have other areas of interests, too. 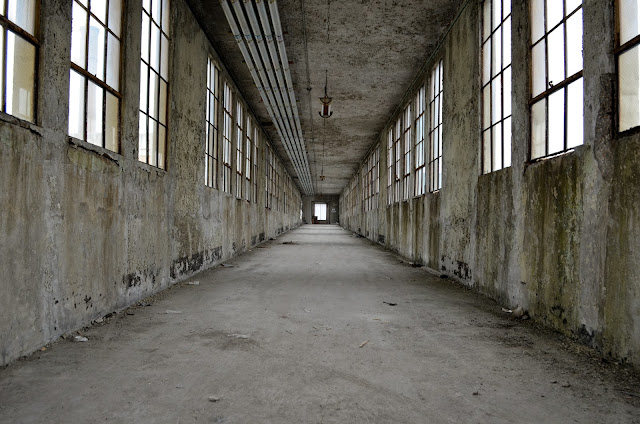 Just don't walk too far off from your group.

If you find yourself in the tourist trap that is Times Square, and have already seen/heard the Max Neuhaus sound installation (see my post here), then walk over to 1133 Avenue of the Americas to witness our bleak financial future with the National Debt Clock. 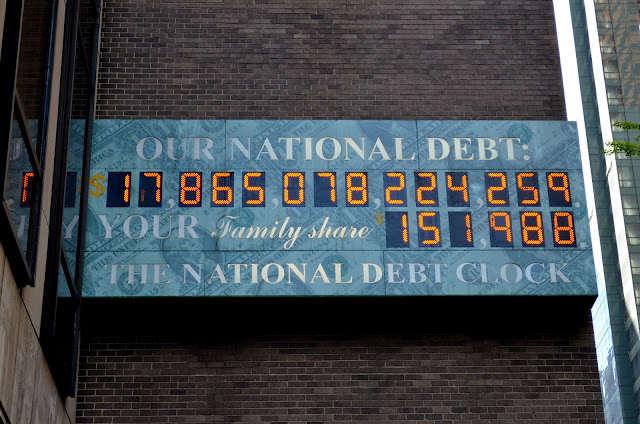 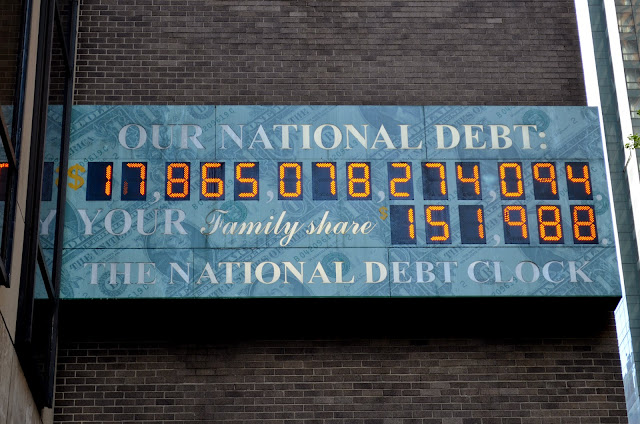 While it was blank from 2000 through 2002, due to it not being able to run backwards, the original clock was taken down for the construction of One Bryant Park, and moved in 2004 a block away to where it is now. 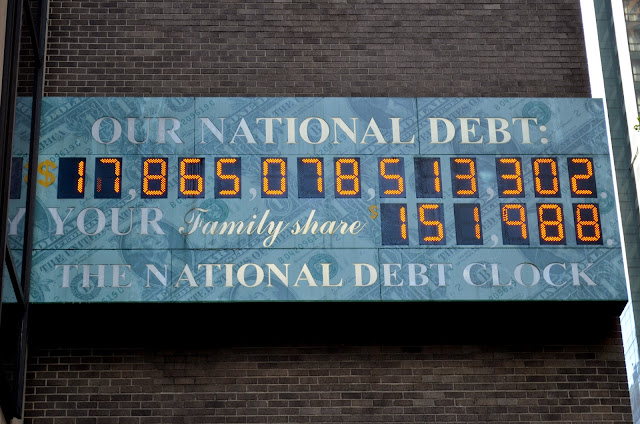 After the move to 1133 Avenue of the Americas (aka 1133 Sixth Avenue), the clock was updated, so it could run backward, and with more easily read digits.
In 2009, more space for numbers had to be added as the federal debt ran past the 10-trillion mark on September 30, 2008. 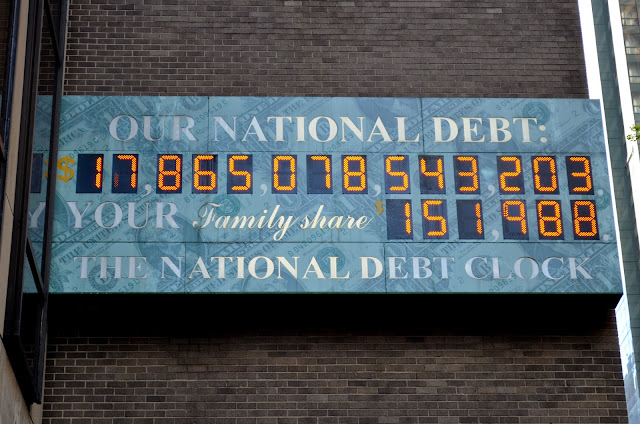 As you can see, by the four photos taken in less than two minutes, we are all in for a hell of a fiscal ride.
Posted by A156

New York city has a lot of interesting stuff, so you'd think they wouldn't need to bolster B.S., but they sometimes do.
On West 34th Street, between Broadway and 7th Ave, there is a plaque on the side of Macy's Department Store, which reads:


HERE THE MOTION PICTURE BEGAN
★
ON THE NIGHT OF APRIL 23rd, 1896, ON THIS SITE
IN KOSTER & BAIL'S MUSIC HALL
THOMAS A. EDISON
WITH THE "VITASCOPE"
FIRST PROJECTED A MOVING PICTURE
------------
IN COMMEMORATION OF THE EVENT , THIS TABLET IS HERE AFFIXED BY
THE MOTION PICTURE INDUSTRY , OCTOBER 4, 1938 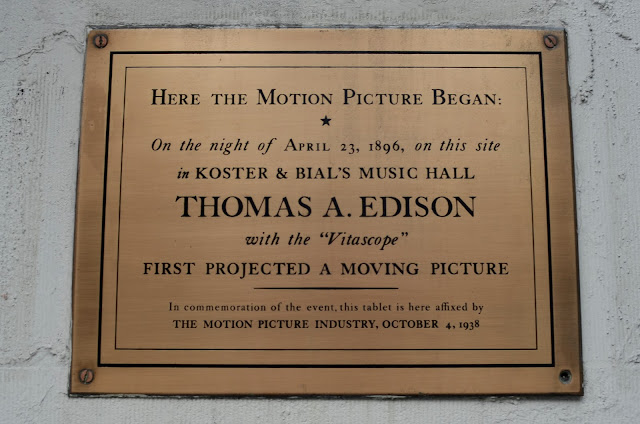 This is actually incorrect. Moving pictures had been around for some time, but could only be viewed through Thomas Edison's Kinetoscope, which showed a single reel of film to one person, "peep show" style. The first public screening was held at Salon Indien du Grand Café, in Paris, on December 28, 1895, by brothers Louis and Auguste Lumiere. They ran ten short film clips, including their own La Sortie des usines Lumière and L'Arroseur Arrosé, but the first projection in front of a crowd would be Charles Francis Jenkins with his Phantoscope. That event holds the earliest documented projection of a motion picture, when he tested a clip of a dancer during a vaudeville act on June 6, 1894, in Richmond, Indiana.
Now, though Edison did pioneer movie projectors, cameras, and film, the Vitascope was actually invented by Charles Francis Jenkins, and Thomas Armat, in 1895, off of modifications to Jenkins' patented Phantoscope. The Edison Manufacturing Company just agreed to manufacture the machine, and produce films for it, if they could advertised it as a new Edison invention.
If all of this angers you, continue west on 34th St, to the corner of 8th Ave, and visit The New Yorker Hotel. 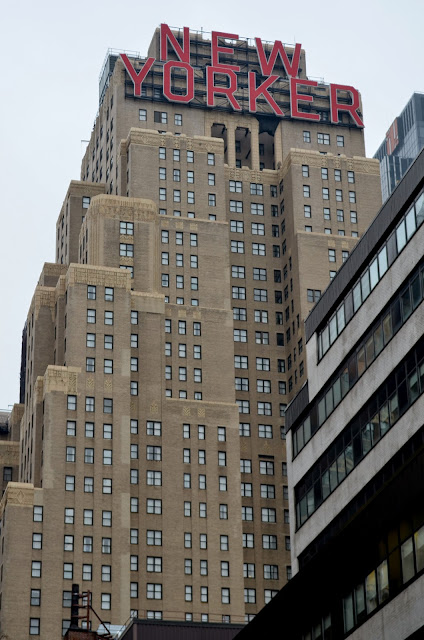 This is the building where inventor, and thorn-in-the-side of Thomas Edison, Nikola Tesla spent the last ten years of his life, in a huge suite on the 33rd floor, which served as living quarters and study.
If you're lucky enough to enter the premises as a hotel guest (or ask nicely), you can see the plaques on the doors, which were converted into two different rooms. 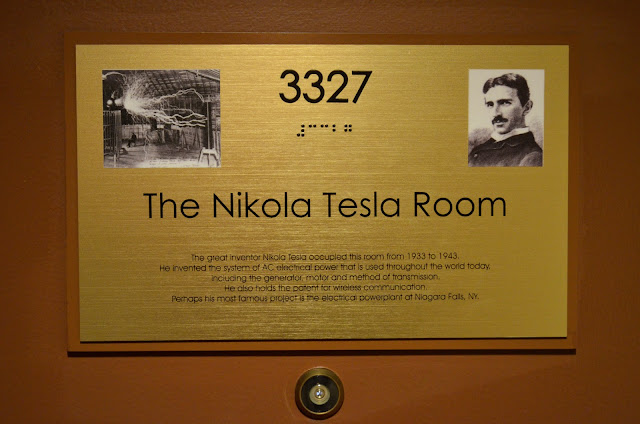 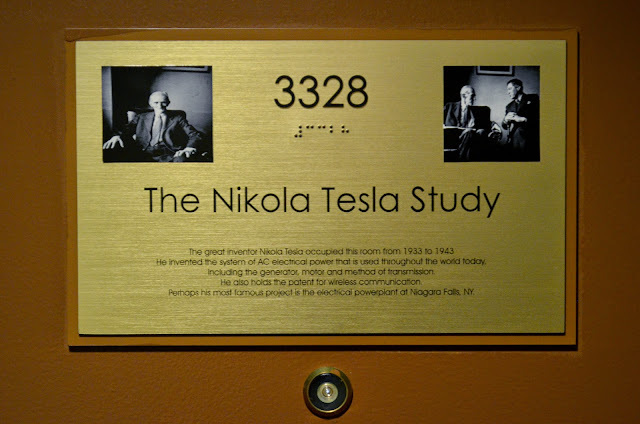 New Yorker Hotel historian, and archivist, Joseph Kinney has set up a small museum in the lower lobby, which anyone can view (near the hotel's Business Center), and it holds some of Tesla's belongings, as well as a bust of the scientist. 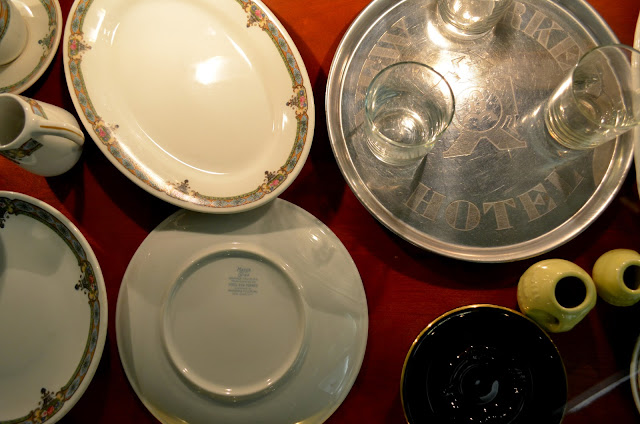 The building also has an outdoor plaque commemorating Tesla's stay at the hotel, which was unveiled in a ceremony on July 10th, 2001. The tablet was originally created in 1977, by Yugoslav-American Bicentennial Committee, but, due to lack of interest in Tesla's work at the time, wasn't placed there until 2001 (thanks to the hard work of the Institute of Electrical and Electronics Engineers).
While the building has been owned by Reverend Sun Myung Moon and his Unification Church since 1975, it is currently run by Wyndham Hotels, who is doing some renovations on the facade, so the plaque is covered up by scaffolding. Until the construction is done in 2016, and the boards removed, you can only view it online (see an image of it here).
Posted by A156