In the north-east section of Queens sits much of an old Dutch town, later absorbed by the expanding NYC borough. Flushing, originally called Vlissing, was established in 1645 by a charter of the Dutch West India Company (part of the New Netherland colony).
The area is rich in the history of religious freedom, due to a theological battle between New Amsterdam Director-General Peter Stuyvesant, farmer John Bowne, and the local Quaker population. It seemed the religion of Quakerism was, at that time, prohibited by Puritanical decree. A group of thirty residents drafted, and signed, a petition known as The Flushing Remonstrance, on December 27, 1657, forcing the Dutch governance to allow freedom of religious practice.
After George Fox founded the Religious Society of Friends (more commonly known as Quakers) in England, he traveled to "the New World", and began preaching in a small grove of oak trees in Flushing, 1672. There now stands a pyramid-shaped rock to memorialize the spot where many congregated to hear him speak. 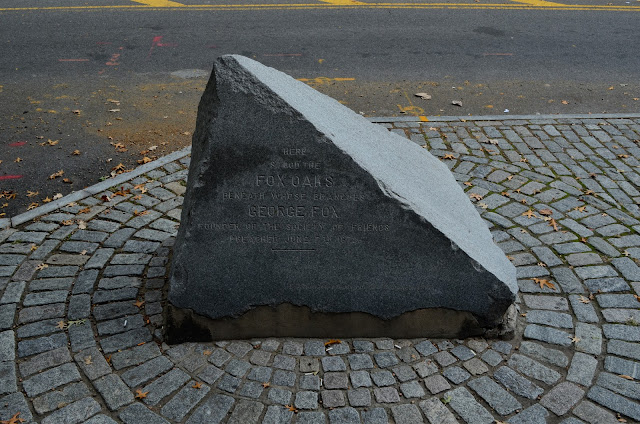 Directly across the street is John Bowne's house.
Despite the ban on Quakers, Bowne held meetings in his home, and he was soon arrested by Stuyvesant. After expulsion to Holland, John appealed, and won his case to worship freely. 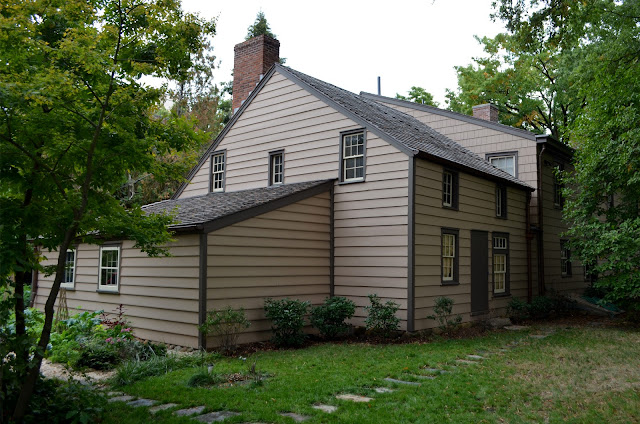 Built in 1661, the site was also a stop in the Underground Railroad during the Civil War.
Though additions have been added to the original structure, much of the interior is preserved, and holds furniture, clothing, and work tools, dating back to when it was originally constructed. 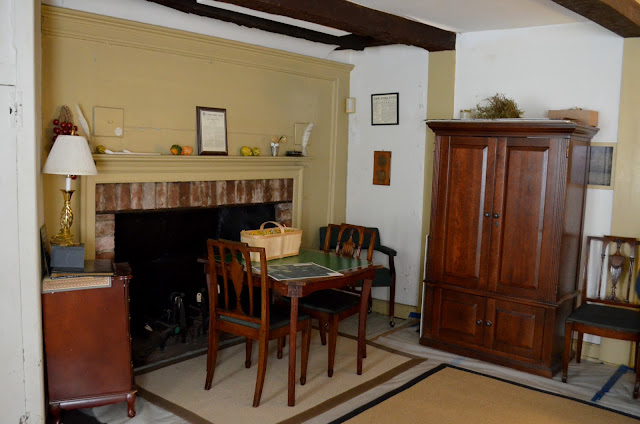 Located at 37-01 Bowne Street, family members lived in the home until 1947, when they donated it to the city as a museum. It was entered into the National Register of Historic Places in 1977.
Now, walking north, one turns west (left) on Northern Blvd to see the original Flushing Town Hall. 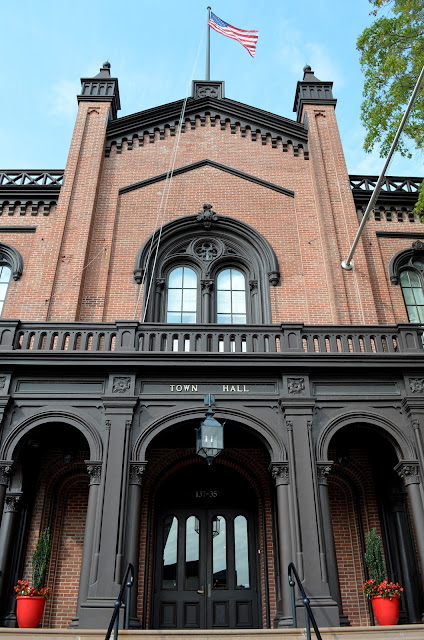 Built in 1862, it was the seat of the Flushing town government, until the area was consolidated with New York City in 1898. The building became a New York City Landmark in 1968, and was listed on the National Register of Historic Places in 1972.
Just across the boulevard is the Old Quaker Meeting House. 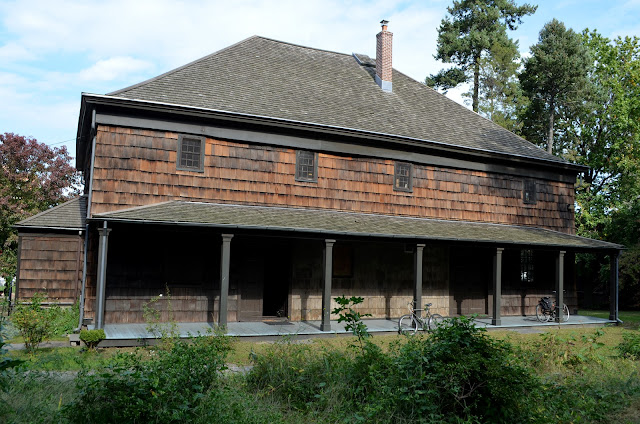 After returning to the Americas, John Bowne bought the land in 1692, and, now free to hold Quaker services, quickly began work on a house of worship. Finished in 1694, the first recorded meeting was held on November 24th, making it one of the oldest religious chapels in the United States. 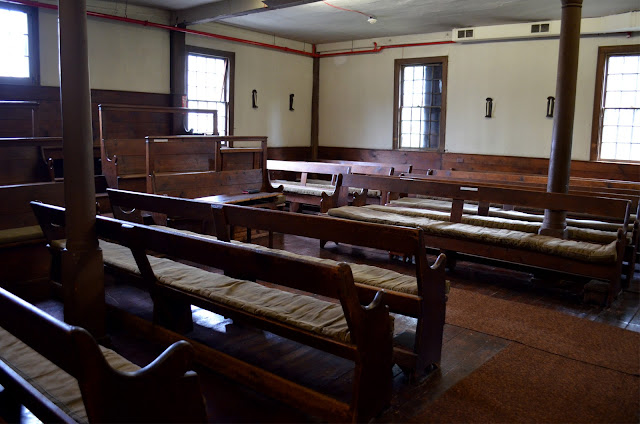 In 1776, the house was seized by the British, and converted to barracks, as well as a hospital and prison. After the Revolutionary War, the Quakers were allowed to return in 1783.
Along the rear of the building is the Quaker graveyard, which was established sometime in the 1670s, and is the reason the land was purchased to construct the meeting house. Though it is believed Bowne (and his wives) is buried here, Quakers did not use tombstones until 1820, so there is no way to know for certain. Graves of note include: abolitionists William Burling and Matthew Franklin; founder of The New York Gas Light Company, Samuel Leggett; John Murray, Jr., founders of the Free School Society and Society for the Manumission of Slaves. 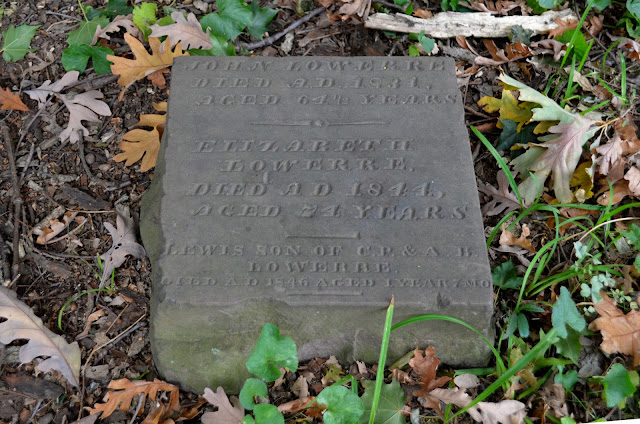 The Landmark Preservation Commission designated the Old Quaker Meeting House a landmark in 1970.
If you are still walking the neighborhood, looking for old churches and cemeteries, head south on Main Street to see St. George's Church. 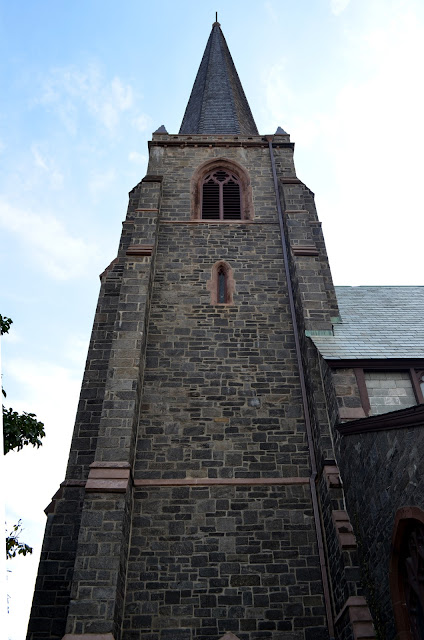 While established in 1702, as a mission of the Church of England by the Society for the Propagation of the Gospel in Foreign Parts, their first church in the U.S. was not built until 1746. In 1821, after purchasing new land, a second church was constructed on its current property of 135-32 38th Avenue, though the building there now is the third structure on the site (constructed in 1854).
In September of 2010, the infamous "Brooklyn Tornado" blew the 45-foot wooden steeple off the tower, crushing a NYC bus. Luckily, no one was hurt, and the steeple was rebuilt in 2013.
The church is surrounded by a cemetery, which was in use until 1887. Grave markers (about fifty) and burial vaults (nine) are found throughout the grounds, except for its main entrance along Main St. It is believed a few graves actually lie under 38th Street's asphalt. 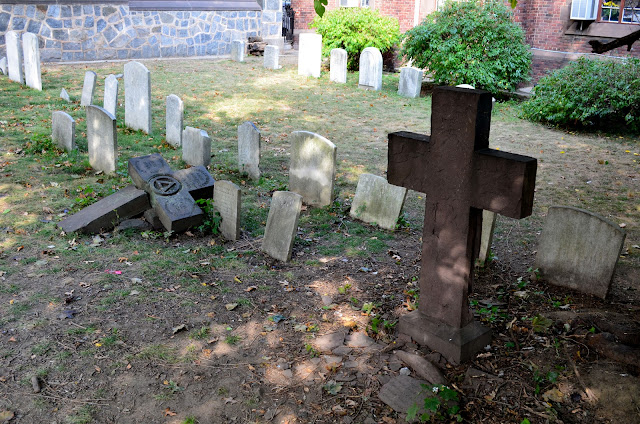 The church, as well as its graveyard, were made a city landmark by the New York City Landmarks Preservation Commission in 2000.
Posted by A156